Giving the Gift of Music

The Festival at Sandpoint’s mission to inspire area youth through music comes full circle with the debut of the Summer Youth Music Camp July 9-12. 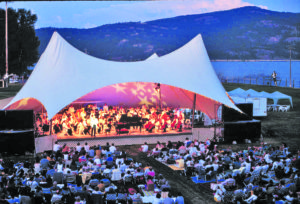 The Festival at Sandpoint tent during a past show. Courtesy of Sandpoint Online.

Camp Director and First Chair Violinist for the Spokane Symphony Jason Moody was the very first recipient of the Festival at Sandpoint scholarship in 1998. He’s also a Sandpoint High School graduate.

“His parents were really instrumental in the beginning of the Festival, and they brought him along and he has said that he remembers looking up at the violinists in the orchestra and thinking, ‘that’s what I want to do,’ and now that’s what he does,” said Executive Director Dyno Wahl.

Moody will lead an all-star faculty of some of the areas finest music educators in what the Festival hopes will be the first of many Youth Music Camps.

On Monday, July 9, these educators will take to the Panida stage for a special All-Star Faculty Concert to inspire their students after the first day of camp.

“They’re such fantastic musicians, most of them have either a masters or a Ph.D. in performance in their instrument, and if they don’t have those, they’ve got years and years of experience. It’s quite an amazing group of musicians,” Camp Coordinator Beth Weber said.

“I called up the local music instructors to see if they were interested and they were all excited about it. That was a word they all used, exciting,” she said. “That was a big go-ahead for me, that they were all so enthusiastic.”

Nearly 120 students from all over the Pacific Northwest will attend the camp, which will consist of four days of instruction, crescendoing with the Grand Finale Student Concert on Thursday, July 12, at the Panida. Thanks to Festival at Sandpoint Donors, students only had to pay a $25 registration fee to participate.

“If we can pull this off well this year, I think people will want to come back,” Weber said.

She hopes students will leave the camp with enthusiasm for music.

“I hope they understand that music is a group effort. You know, you put in your private practice, but then one of the most beautiful things about it is the group interaction you get when you play music,” Weber said. “It’s part of the mission of the Festival to support music education in the community, so it really answers that aspect of the mission. I think it was something the Festival was really eager and ready to do.”