The origins behind the New Year’s song ‘Auld Lang Syne’

Every year, as the clock strikes midnight on New Year’s Eve, a familiar song is often heard crooned by half-drunk party goers as they ring in the coming year. But how did “Auld Lang Syne” earn its place as the official song most of us sing after the champagne pops and the ball drops? It can elicit tears from many, and most probably don’t know most of the words, but this nostalgic song has been firmly cemented with New Year’s traditions for several centuries. 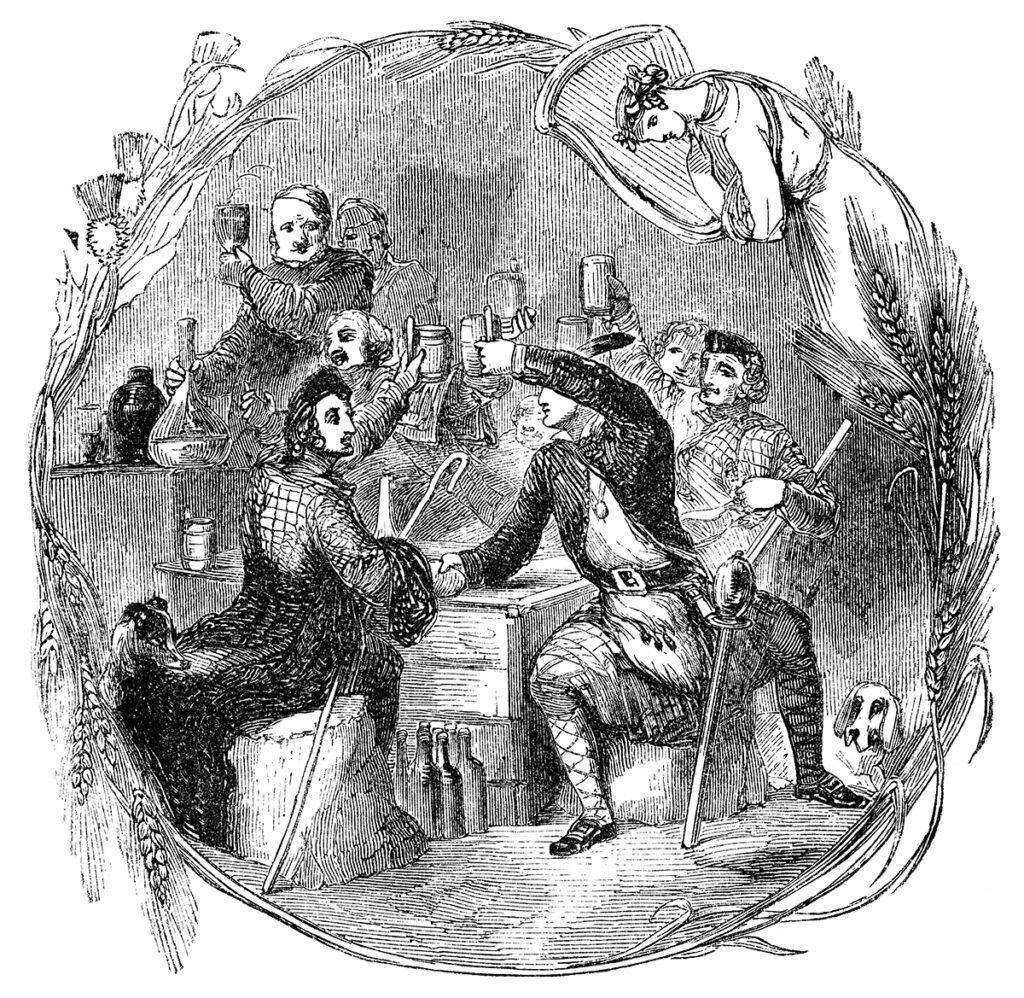 An engraved vintage
illustration drawing of the celebration of “Auld Lang Syne” on New Year’s Eve, from a Victorian book dated 1854. Courtesy photo.

The song is credited to Scottish poet Robert Burns, who is most known for his poem “Comin’ Thru the Rye.” Despite Burns’ association with it, “Auld Lang Syne” actually originated as a ballad by James Watson well before his time. Watson’s original first verse and chorus in 1711 read:

Should Old Acquaintance be forgot

and never thought upon;

The flames of Love extinguished,

and fully past and gone:

Is thy sweet Heart now grown so cold,

that loving Breast of thine;

That thou canst never once reflect

On old long syne my Jo,

That thou canst never once reflect,

When Burns sent a copy of his poem to the Scots Musical Museum in 1788, he noted that he had “collected” some of the lyrics, rather than composing the poem from scratch.

In 1793, Burns sent the song to James Johnson, who was assembling a book of old Scottish folk songs. He wrote to Johnson, “The following song, an old song, of the olden times, and which has never been in print, nor even in manuscript until I took it down from an old man.”

By the time the book was published in 1796, Burns was dead and would never know his words would eventually become the song most sung to usher in the new year.

The tune we sing today is different than the original, which one can listen to in 2008’s Sex and the City movie, of all places. The version we sing today was used at the suggestion of music producer George Thompson, who thought the original song was “mediocre,” so he printed “Auld Lang Syne” with music to a traditional Scottish melody.

Why has “Auld Lang Syne” become so entrenched with New Year’s Eve? The best guess is that in 1929, when bandleader Guy Lombardo played the song as transitional music while performing at New York City’s Roosevelt Hotel during a New Year’s Eve broadcast just after midnight, it was heard over radios and televisions, inadvertently spawning a global tradition.

Today, “Auld Lang Syne” is sung after the ball drops on New Year’s Eve, but it’s also played at funerals, celebrations and, in Japan, as a warning that closing time approaches.

This year, as you raise a glass to your friends and loved ones on New Year’s Eve, take heart knowing that the words you mumble and struggle through are likely sung by hundreds of millions of others, all in dedication of the times gone by.