Annie Welle plays jazz on concert grand at the Winery

Thirty years ago a wellspring of music culture existed in Sandpoint. On the mountain, Gunther Schuller’s Festival at Sandpoint chamber musicians amazed audiences in the old ski lodge, while at Memorial Field the Spokane Symphony Orchestra and a Russian pianist mesmerized listeners as rain fell, and no one moved. Along Sand Creek, at the former Garden Restaurant Lounge, pianist Raphael played Debussy with cascading ferns framing listeners sipping wine. 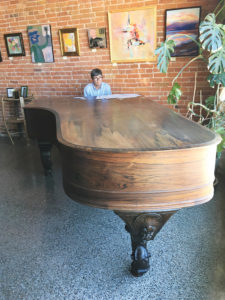 In those days, Annie Welle played the Garden’s grand on a New Years Eve. Pend d’Oreille Winery vintner and new owner, Jim Bopp, was a teenager washing dishes in the restaurant’s back room. It’s an era that still captivates Bopp, and one that he would like to see return. It’s why he has moved his grandparents’ piano out of storage, where it’s been for 25 years, and into the Winery so musicians like Welle can play it.

Classically trained, and playing since she was four, Welle now performs solo jazz. Improvisations, original works, and the standards — Fats Waller, Gershwin, Cole Porter and pieces that will have you thinking you’re listening to Miles Davis or Chet Baker. A workshop and positive critique of her composing by Marian McPartland many years ago at the Lionel Hampton Jazz Festival inspired Welle to find her signature sound.

The Winery’s piano is unique. It’s an 1875 Decker Brothers of New York concert grand whose cabinet is 7’, 4” long and made of coastal Brazilian rosewood, a tree now protected. This gorgeous wood is very resonant, which is why the finest acoustic guitars are made with it. The piano was bought by Bopp’s grandparents — the late, former Schweitzer Resort and Pack River Management owners Jim and Jean Brown — as part of the purchase of their lakeside home. Bopp and his brothers grew up in that house, but played under the piano. It made a great hideout with couch cushions placed around the perimeter.

Jim Bopp thinks it’s time to try that rebirth of music culture in Sandpoint, and his and co-owner Kylie Presta’s winery might be the perfect place for it. He hopes that others will want to perform on their special piano, and that people will come to the Winery to hear it and toast its sound.

So how does this 1875 concert grand sound?

“It’s got a lot of character,” says Welle. “There’s a lot of depth when you play a key, you can feel a length of that string on the soundboard. It’s very deep and rich; I can almost feel the other end of the piano in my toes.” She adds that its full sound is perfect in the Winery’s large room, and the wood is part of that sound.

“I really think the spirit of the tree that the wood came from is still in the wood,” says Welle. “It’s contributing to the vibration of the music. It’s gone down through all these decades and back to a time when that tree was alive.”