From food truck to First Ave.

Beet and Basil has a local commitment with a global touch

Basil tea colored pink with dried beets. Small succulents on every table. A bar adorned with repurposed metal and bookcases.

To put it simply, Beet and Basil is all about the details. 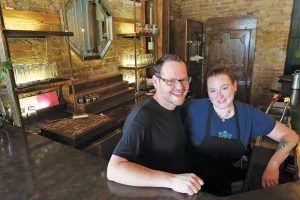 Jeremy Holzapfel and Jessica Vouk pose at the Beet and Basil bar. Photo by Ben Olson.

The restaurant — once a food truck — is owned by Jessica Vouk and Jeremy Holzapfel and recently acquired the space on First Avenue previously known as The Inn At Sand Creek, but is now known as The Creek. With the truck in retirement and the restaurant now occupying a Sandpoint storefront, Beet and Basil joins a myriad of riverfront restaurants. Still, a single detail stands out to front-of-house manager Ricci Witte when asked how Beet and Basil will stand out from the rest.

“We don’t have french fries,” she said with a laugh — but she said she’d suggest the naan with curry sauce as a delicious alternative.

“There are plenty of french fries in Sandpoint,” Holzapfel said. “There’s plenty of American cuisine in Sandpoint — it’s taken care of and covered. The thing that distinguishes this place is the same thing with our food truck — we were really going for what we thought Sandpoint was missing, what we would drive to other places for.”

Vouk, not only the owner but also the head chef, spent time in Seattle learning about food from around the world. In bringing that knowledge back to Sandpoint, Witte said Vouk wanted to bring a little bit of the global taste to Sandpoint while still staying true to the area with local ingredients.

“We’re calling it global street food, so it is from all around the world, but grown in Sandpoint,” she said.

Holzapfel said that while people will see unique items on the menu, they shouldn’t be afraid to try new dishes, and once people are familiar with dishes like the vermicelli noodle salad and others that will regularly appear on the menu, they’ll be more open to newer and more unfamiliar things.

“This is our entry menu, basically making it very easy to be a customer right now. Even though it seems scary, it’s not. It’s very approachable,” he said.

Fresh veggies are a huge part of Beet and Basil’s regular menu, but fear not — there’s plenty of meat to choose from. Holzapfel said a big part of Vouk’s approach to cooking has to do with spices — tracing them to their roots and then learning how to mix and match to create new fusions.

“She can make delicious, dynamic dishes that make you want to come back,” Holzapfel said.

In remodeling the space at the The Creek where Beet and Basil now exists, Holzapfel said they were going for a “modern speakeasy feel.” Dark wood accented with metal and small pops of color make up the bar and dining space, while plans for developing the area to the right of the main entrance into an event area are underway. Witte said her favorite place in the new restaurant is what they’re calling the “sunroom.”

“It’s perfect if you want a view of the (water), but not be outside in the elements,” she said.

While Holzapfel said he and Vouk hadn’t planned to open the restaurant in a permanent space until next year, they couldn’t pass up this location. The result is a steep learning curve, he said.

“We’re learning really fast. Every single day, every minute, we are constantly evaluating, taking notes, adjusting, changing,” Holzapfel said, adding the menu will change regularly and those changes will be posted on Beet and Basil’s Facebook page.

And because Beet and Basil is all about the details, no addition to the new location’s atmosphere is anything less than well thought out. On the wall across from the kitchen hangs several picture frames filled corner to corner with tiny green succulents — something Holzapfel calls the “living walls.”

“It’s really about growing — and the living walls represent that in this space,” he said. “We are going to be constantly changing, evolving here. It’s going to always be interesting.”