Jacey’s Race: Why we help those in need

“You feel so alone when your child is sick.”

Nanci Jenkins works full-time with Panhandle Health District, but it’s obvious that her unpaid job — supporting the families of local, devastatingly-ill children through Jacey’s Race — isn’t just a hobby. After all, she was there herself, 16 years ago, as Jacey’s mom.

It all began in 2001. An aggressive form of cancer took over much of 4-year-old Jacey’s body, stampeding through her kidneys and lungs in shockingly quick succession. Jacey was a trooper through chemo, radiation, and all the various tortures of survival. But, what was everyone else to do? Nanci noticed her friends and family growing antsy and nearly ill with the stress of it. And so, they pulled together a 5K race and celebration, calling it “Jacey’s Race.” Four hundred people showed up. 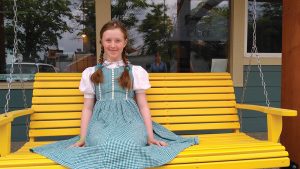 Clara Falconer, 11, is all smiles despite her arduous recovery due to complications associated with AVM. Photo by Jen Heller.

“Friends just swarmed [Jacey],” Nanci says, reliving the joy of that first event. “Everyone loved it. They all said, ‘Let’s do that again!’”

So, they did, a couple of times… but, this was all in Colorado, and in the winter of 2004-2005, the Jenkins relocated to Sandpoint.

“We moved, and I thought, ‘OK, that’s behind us now,’” Nanci recalls. She couldn’t have been more wrong. Nanci was repeatedly stunned by how few resources there were in the community for parents of young cancer patients. “Our introduction to Sandpoint was, ‘We really don’t have childhood cancer here,’” she remembers. It turns out, of course, that there was, and is, and continues to be.  Someone just needed to get the word out.

In 2007, after a few years of getting to know local resources and networks, the Jenkins family re-launched Jacey’s Race as a fundraiser for local children with severe, chronic, and/or life-shortening illnesses. Proceeds go towards local organizations that support families through long-term care, and towards the unexpected or uninsurable costs of illness.

What’s different about Jacey’s Race compared to other fundraisers?  For starters, it’s a true race: The 5K is organized by Sandpoint High’s cross-country coaches, timed using chip technology, and draws in some of Sandpoint’s more passionate runners. (Bonus: There’s cash prizes for the top overall finishers.)

There’s also the flip side: Jacey’s Race is all about celebrating, so anyone under the age of 12 gets in for free.  There’s a 1K for those who want to take life a little easier.  There’s a carnival, complete with a jumping castle, face painting, balloons, and more.  There’s vendors, a silent auction, and cool t-shirts.  As Nanci puts it, “If you don’t run, you can still come.  We want this to be about the [beneficiaries] and their families.  If you don’t have money, come anyways.  If you do have money, leave some behind in the donation boxes!”

Jacey kicked cancer aside and will be celebrating her 21st birthday this summer, in the same week as Jacey’s Race celebrates its 10th year here in Sandpoint.  Register online at www.jaceys-race.com, or join the fun July 9th at Sandpoint High School.

Jacey’s Race helps scores of people, providing everything from internships for high-schoolers to a collaborative network for physicians.

This year’s direct beneficiaries are:

•Jared Kluesner (15), Sandpoint, living with ALL.

We don’t have enough room to feature everyone, but here’s Clara’s story, in brief:

Clara was “just a normal 10-year-old” until last October, when she was struck by a terrible headache while helping with yardwork. “She said it was like an ice pick had hit her in the head,” her mom Sheila recalls.

Fortunately, Clara’s older siblings had just finished a CPR class. Knowing the signs and symptoms of a brain aneurysm, they called for help. Soon after arriving at the hospital, Clara was comatose and on life support.

After emergency surgery in Seattle, Clara began her recovery paralyzed on her left side. Today, she has made miraculously quick progress. However, the faulty blood vessels that ruptured in her brain are still there. Clara faces another three procedures in the next 18 months, which will reduce her risk of future strokes, but re-expose her to a list of possible side effects, including permanent paralysis.

Clara’s family is optimistic about her future — they know how fortunate she is to be here. “One out of every two-to-five thousand people have congenital AVM and don’t know it, which means there are probably a few others in our community at risk. We hope people hear Clara’s story, learn the signs and know when to seek immediate medical attention.”