If there was one prevailing message at the 2018 North Idaho Women’s March, it was that it’s time for women to start taking leadership in government. 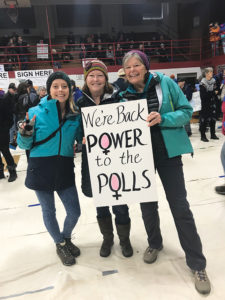 The march, which brought about 951 attendees around the region to Sandpoint, was nothing if not consistent to its theme: First they marched, then they ran. Building off the momentum established last year, the event’s focus was squarely on encouraging women dissatisfied with the political order to file as candidates in local and state elections.

“We’re going to need to do a lot of yoga, because we need to run for office,” said Rebecca Schroeder, who is running as a Democrat for District 4 state representative.

The star of the rally prior to the march was Paulette Jordan, a Democratic gubernatorial candidate who has garnered national attention. If elected, she would be the first female governor of Idaho and the first Native American governor in U.S. history.

“Being part of a new era, I can say this is where it all starts. … This is a new America,” said Jordan.

In recent weeks, national publications have profiled Jordan, and she even racked up a celebrity endorsement this week when singer and actor Cher announced her support for the candidate. But Jordan emphasizes her down-home roots when it comes to her view on Idaho politics. She said she understands the state because its issues are built into her very foundations.

“I will live and die for Idaho, because I was born and raised in Idaho,” Jordan said.

Jordan maintains a few unusual stances for a progressive political candidate. For instance, she herself is a gun owner and is a strong supporter of Second Amendment rights. She also encouraged marchers to reach out to those with differing beliefs, saying she counts traditionally libertarian and Republican voters among her supporters. People in general have more commonalities than differences, she said, and it’s important to remember that.

“We’re not just going to win by one party,” Jordan said. “This is going to unify the entire state.”

Prior to Jordan’s speech, Schroeder recounted how she was first motivated to expand her professional skills as a biochemical scientist after her son was diagnosed with cystic fibrosis. She was further motivated to run for political office when Idaho became one of 18 states to resist Medicaid expansion under the Affordable Care Act, a move that benefits many people with cystic fibrosis. Schroeder told the crowd to not be dissuaded when people doubt them.

“Nothing motivates me more than being underestimated,” she said.

Indeed, Medicaid expansion was a major part of the 2018 Women’s March. Organizers set up tables where volunteers collected signatures for Reclaim Idaho, an ongoing campaign to put Medicaid expansion on the Idaho ballot. Proponents of Medicaid expansion see it as a solution for thousands of Idahoans who make too much to qualify for Medicaid but too little to afford a subsidized private insurance plan.

The many messages of the N.I. Women’s March

Amid the sea of poster board, it was easy to discern what each person felt most passionate about. Most were there to show support for feminism-related issues. Some came to protest immigration, abortion and more.

Tasha Shields brought her young children to the march.

“I’m here showing my kids the democratic process and supporting women’s rights and equality for all,” she said.

Mary Meek said she attended the march to stand for peaceful solutions.

“I’m here to help build a bridge, because we’re so polarized,” Mary said. “We need to come together.”

Mary’s daughter, Hannah Meek, said she marched not just for women, but for all people.

“I think Idaho is an interesting state to live in because there’s change that can happen,” Hannah said.

According to Deeann Smith, who donned a sign that read “We’re Back, Power to the Polls,” that change can happen.

“I’d like to see more women elected. I love Paulette (Jordan), we just met this morning, and she’s amazing. I’m thrilled that there are so many people here to support her,” Smith said. “I think we have a real chance at changing things in Idaho.”

Wayne Babcock said he marched to protest actions happening at the national level.

“I march for love and freedom and the inclusiveness of all people — and against Trump,” he said. “His values of unrelenting greed and self-promotion — those are not the values my mother taught me.” 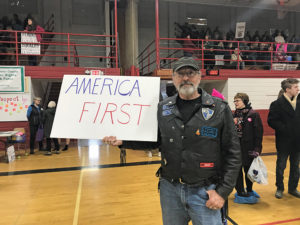 Jim Bure holding a sign that read “America First” at the N.I. Women’s March on Saturday. Photo by Lyndsie Kiebert.

Jim Bure attended to protest actions on the federal level as well, but in regard to immigration. Bure carried a sign that read “America First” and stood next to a woman with a sign reading “Kate Steinle was a woman too.” Steinle was shot and killed by an illegal immigrant in 2015.

“We have a lot of things going on that are completely breaking what is constitutional law. We’re not opposed to legal changes in law, but when it comes to the DACA stuff, where there is absolutely constitutional law, they’re disregarding it,” he said. “Instead of going through an acceptable avenue which creates change that is acceptable to everybody, there is a certain aspect of the population that wants to control what they’re doing and bypass constitutional law.”

“I’m here because it’s time to do something,” Hall said. “We have a voice and we need to use it, and that’s what we’re doing.”