The concept of grabbing a quick bite to eat isn’t a modern invention. People were busy during antiquity, and while the texts of the Middle Ages taught us that people valued optimizing every facet of their lives and minimizing waste, the centuries of Roman rule in Europe painted a very different picture.

Despite what Star Wars taught us, that empires are all evil and ruled by megalomaniacal, power-hungry creeps, history has shown us that there are genuinely beneficial reasons for empires to have sprung up and persisted for some time throughout the ages. Among them is affordable access to goods — particularly of the imported variety. It was this wide access to plentiful and affordable food that led to some of the first fast food joints springing up in the world. 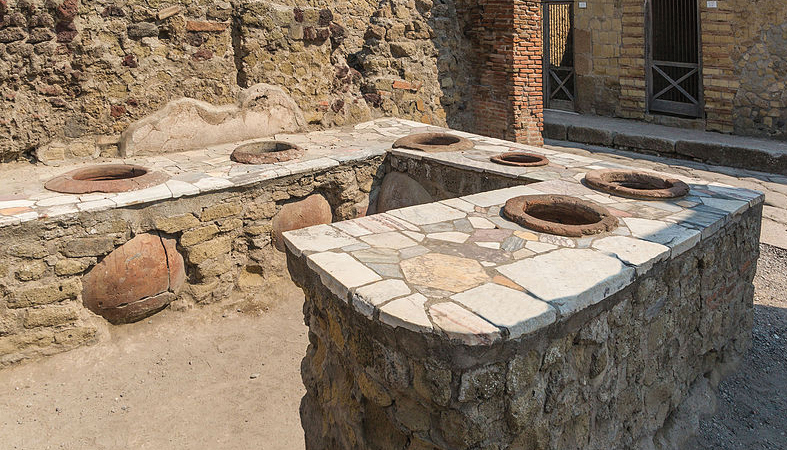 These shops were referred to as thermopolia, and they were often attached to the entrance of a Roman apartment building, called an insula. Many shops were attached to the front of these apartments, acting similarly to strip malls today. Thermopolia were strategically placed in these locations so that busy Romans would swing in for a bite to eat on their way to and from work. You might be wondering why these Romans didn’t save some money and prepare their own breakfast, instead? The answer to that is simple: Romans didn’t have access to refrigeration like we do today. While they did often keep a number of ingredients at home to have meals prepared, such as salted meats and dried herbs, it was simply more economical to get a juicy slab of meat and some wine from a vendor that specialized in procuring and producing it than to store and prepare it themselves.

It’s important to consider social class when discussing these establishments, as some of the implications for class have stuck around over two-thousand years in regards to fast food. Thermopolia catered to the lower and middle classes, respectively, often under the same roof. The upper classes of Roman society could often afford servants and slaves, as well as the storage space required to house ingredients for home-cooked meals. Thermopolia exploited the class system of ancient Rome to its fullest, generally offering a selection of food on a tiered pricing system. Fermented fish sauce, called garum, and tree nuts were generally on the lower end of the scale — similar to a familiar franchise’s “dollar menu.” Those that were willing to spend a bit more and show off the excess of their middle class station could purchase lentil soups, baked cheeses or meats cut straight from the bone, similar to modern shawarma shops. Hot wine was also a staple of these businesses.

Most establishments of the time had a fairly simple layout: an open area where customers could gather and wait to order, and an L-shaped stone counter with large holes cut into the surface where pots or jars, called “dolia,” would be placed. There was a space beneath the dolia where wood fires could be built and maintained through the day to keep the contents hot, or left vacant if they were meant to be kept cool. This practice has evolved into the hot bars you see at most contemporary grocery stores and buffets.

The concept of franchising may be a modern invention — most thermopolia were family-owned and operated — the concept of branding is a tale as old as time. Some establishments were very basic, designed exclusively for patrons to take their food and leave while others allocated a little extra real estate in the back for customers to sit and dine-in. A number of these dining locations we’ve excavated from the ruins of Pompeii show elaborate frescoes that indicate the owners were wealthy, and they wanted their clientele to know it. We see this frequently today, with a number of fast food chains offering “the best deals”, while others want you to believe you’re paying for a more classy, high-end experience.

These differences were illuminated by the taberna and popina, respectively. These shops existed as a form of thermopolia, but each with stark differences from one another. Taberna, from which the word tavern originates, functioned similarly to today’s food trucks, often forming a stall directly attached to the front of a Roman single-layer residence, called a domus. It would be like having a hot dog stand directly outside of your front door, every day.

Popina were establishments designed with the lowest classes in mind, often selling basic “grazing” food such as bits of bread and olives, but specializing in wine, both hot and tepid. These establishments often grew seedy reputations, due to the nature of the people that frequented them. They were essentially the dive bars of Rome.

It’s intriguing to look back at this time in human history and compare it to our own, as well as the Dark Ages that followed the fall of the Roman empire. The metropolitan areas of the empire lived to great excess, and were capable of affording building shops where food could be wasted, but still profited upon. Throughout Europe, much of this disappeared in the wake of the empire’s collapse as the everyman took upon themselves the burden of maintaining their own supply of food and drink. Wastefulness and excess was frowned upon by most people, likely because of the influence of the growing Catholic church (which indulged in its own displays of gross excess).

Now, it seems we’ve returned to a time and comfortability mirroring ancient Rome, where it’s easier for most of us to exchange an hour or two of work’s pay for a quick bite to eat, rather than store and prepare it ourselves.

Unlike the Roman Empire, we have a lot of wax paper and plastic to contend with once we’re done.