Beliefs and practices of the Christian Identity Movement

Back in the day — when Richard Butler of the Aryan Nations, Vincent Bertollini, the “11th Hour Remnant Messenger,” and others, were trying to spread their ideas in our community — it was important to understand the basis of their beliefs. Members of the Human Rights Task Force, in order to take an informed stance, found ourselves studying the ideology they had in common, known as “Christian Identity.” Now that, in recent months, the same kind of thinking has surfaced in the form of flyers spread around town, it seems like a good time for a refresher course. 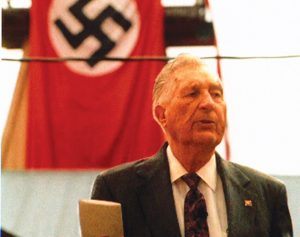 Richard Butler speaks to followers of Christian Identity with a Nazi flag in the background. Photo courtesy of Southern Poverty Law center.

If you’re looking for anti-Semitism, racism, homophobia, anti-government conspiracies and glorification of violence — all in a religious wrapping — you’ll find it in the Christian Identity movement. This might sound like a derogatory statement. However, I had the experience of giving a talk at a human rights meeting about Christian Identity beliefs with Richard Butler and a number of his followers sitting in the front row. My presentation covered all of the points I will be making in this article — and more. Butler and friends just sat there and nodded their heads!

Christian Identity theology creates a worldview based on interpreting Biblical scripture in a way that supports the idea of white supremacy. This world-view arranges humanity so that so-called white, or Aryan, races are the only divinely recognized human race, directly in opposition to the “Jews” who are the “seed of Satan,” and far above the other, inferior races who are referred to as “mud-people.”

A well-known example of using the Bible to support white supremacy was during the fight over school segregation in 1957 when Governor Faubus of Arkansas shouted out that in the book of Genesis, it says that God divided the light from the dark, and, by God, it was going to stay that way in Arkansas! Richard Butler preached from his “Church of Jesus Christ Christian,” where a bust of Adolf Hitler was saluted as part of the service.

Not all Christian Identify groups are the same. However, all hold to the concept that in the Kingdom of God on earth, all non-whites will be exterminated or enslaved to serve the white race. Some groups believe it is their responsibility to bring this condition about through the use of violence, and that they will be rewarded by God for such actions. Other groups have a “softer” view, but interpret world events as moving inevitably toward the supremacy of the white race.

Even among the less militant groups, there is the belief that attaining the Kingdom of God will involve a “battle” or “warfare” and that its adherents must prepare for the journey and war for the Kingdom. This means both spiritual preparation and physical preparation — amassing survival supplies, weapons, ammunition and training. There is also the belief that you must know who your enemies are. Christian patriots are urged to collect information and keep files on those who are actively working against the “true Israel and Christ’s Kingdom.”

It is acknowledged that there will be those among the believers who will arise and distinguish themselves as warriors, taking an active role in bringing the Kingdom closer by committing Jewish, racist or homophobic murder. Some of the individuals who have done this have identified themselves as members of the “Phineas Priesthood.” This comes from the book of Numbers and the story of Phineas, the son of Aaron, who took a javelin and ran it through an Israelite and a “Midian-itish woman” he had brought into camp. The admonitions in the Bible against marrying the people of the lands in which the Israelites sojourned are interpreted as a call for racial purity. The act of Phineas is seen then as a righteous action against “race-mixing.”

Other Christian Identity themes drawn from the Bible assert that the two creations in Genesis refer to the creation of Adam as the progenitor of the true (white) race — and that the previous creation was that of the “mud-people.”  The serpent’s seduction of Eve, in Christin Identity theology, means that Satan seduced Eve who then introduced sex to Adam. The result was the birth of Cain and Abel. The offspring of Cain, who married a “pre-Adamic” woman, through various adulterous matings, became the Jews.

The “good seed” is traced through Abraham and Isaac, and then to the tribes of Israel, the name given to Jacob after wrestling with an angel. Ten tribes wind up in Northern Europe and become the “Aryan Nations.” They are the true “chosen people,” or Israelites. Only the “Adamic” race is capable of receiving salvation and belonging to the Kingdom. Therefore it is a belief in biological determinism that our worth is determined — not by our deeds, but by our race.

Another source for Christian Identity beliefs is “The Protocols of the Elders of Zion,” supposedly a record of the secret meetings of Jewish leaders that outlines their plan for world domination. It is the most widely distributed anti-Semitic document of modern times but has been proven to be a hoax. It can be traced back to the writings of a French Jesuit in the early 1800s and a satirical pamphlet that was spun into a tale of Jewish conspiracy by a German anti-Semite around 1868. It was translated into Russian after that and became further codified into “The Protocols.”  This “document” was used, after the Russian Revolution, to justify the killing of Jews, and then found its way to Europe. There, despite its exposure as a fraud, it was promoted by Henry Ford in the U.S. and formed an important part of the Nazi justification of the genocide of Jews in the Holocaust.

This concocted document supposedly outlines the steps that will precede establishing Communist-Jewish rule in America. Some of these steps are: (7) infiltrate the legal profession and advocate civil rights for minorities; (8 and 17) institute public schools and brainwash children with the watchwords “liberty, equality and fraternity;” (10) gain control of the major media and create simulated opposition newspapers to give the citizenry the impression of free speech; (11) distract the population with elaborate sports festivals, amusements and recreations, most importantly pornography and free love; and (20) implement progressive income taxes, expanding easy credit and then strategically withdraw it, creating economic crises.

Current events that resemble the steps outlined in the Protocols tend to confirm the collusion of the U.S. government with the supposed conspiracy, and lead Christian Identity adherents to believe the coming race war and ultimate victory for the white race are fast approaching.

In the late ‘90s, three men convicted of crimes including bank robbery and bombing an abortion clinic and newspaper office in Spokane left signs indicating that they saw themselves as members of the “Phineas Priesthood.” Buford Furrow, who opened fire on children at a Jewish Community Center in 1999, attended a Christian Identity church. Many others associated with these beliefs have been convicted of crimes inspired by that ideology. Timothy McVeigh grew up in the Christian Identity movement and was inspired by a book called “The Turner Diaries,” widely distributed among neo-Nazi and white supremacist groups.

The increase nationally of anti-Semitic, racist and anti-immigrant acts, crimes against LGBT individuals, conspiracy theories, the prominence of white nationalism and attacks against journalists all warrant taking another look at the beliefs that spawn such behaviors. We thought we’d heard the end of it when the Aryan Nations compound disappeared, Richard Butler died and Vincent Bertollini left town. We were wrong. Unfortunately, these ideas are still around.