When Netflix hits me with a show descriptor containing words like “deadpan” and “cynical,” count me in. I’m a slave to the algorithm like all of us. The “Netflix comedy event” titled Death to 2020 delivers on every blackhearted front. To wit, I laughed like a loon in bitter tones that drew my family into my benighted home office several times, just to be sure I wasn’t having a stroke. Not yet… not yet. 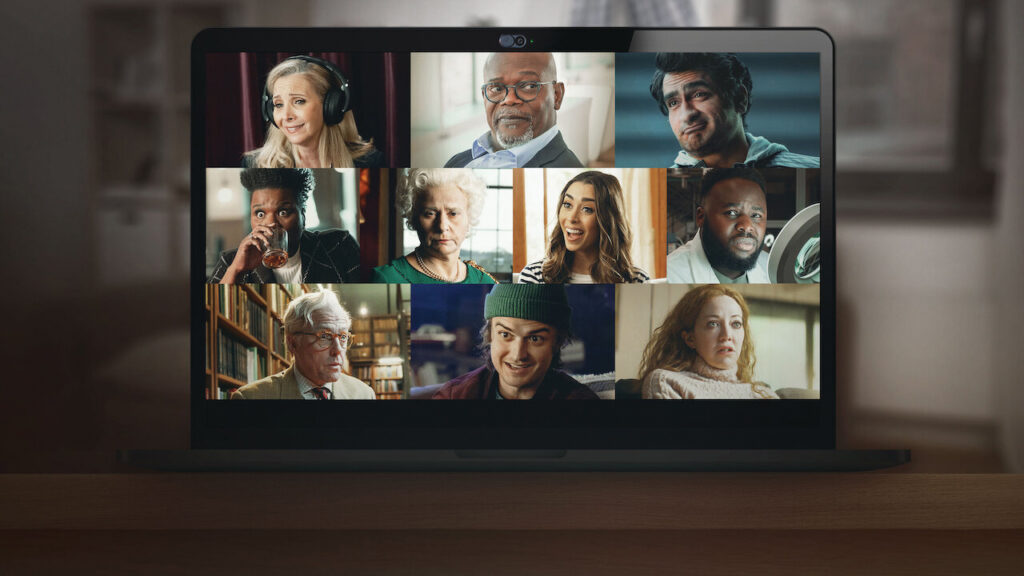 This is a mockumentary, but we may have finally reached post-post-modernism, in so far as mockumentary is better than documentary. In our “post-truth” era, this fake-truth carnival of temporal horrors has all the “truthiness,” as Stephen Colbert famously put it back in the G.W. Bush regime, of, well, truth itself.

Samuel L. Jackson, portraying a fictional journalist, serves as one of the key talking heads around which the show revolves. From the outset, he questions, rightly, the purpose of such a retrospective enterprise of 2020; the “year so momentous they named it twice,” as narrator Laurence Fishburne puts it.

“Why in the fuck would you want to do that?” Jackson asks.

The pervading mood of this hour-plus-long chronicle of human wreckage, stupidity, mendacity and cupidity is weariness, tinged with sublimated rage and a giddy kind of absurdity. It’s “the definitive story of the most historic year in history,” Fishburne intones as Jackson kicks off the chronicle of pain, starting with the 2020 meeting of world leaders at Davos, Switzerland — the “Coachella for billionaires,” he says, keynoted by Greta Thunberg, a “teenage girl who’s famous even though everything she says is depressing.”

Other pop culture moments are brought up, laughed at, and set back down — such as Prince Harry and Megan Marckle moving to the U.S. to escape prejudice (because, America is a place “where race has never been an issue at all,” Fishburne states flatly) — but the vast majority of Death to 2020 turns on the COVID-19 pandemic, the 2020 election and the messy götterdämmerung of the Trump administration.

Teeing off on the presidential race, Fishburne’s narrator set the stage for the election bringing together such contenders as “president and experimental pigman Donald Trump,” “prehistoric concierge” and “Civil War hero” Joe Biden, and “anarchist grandpa” Bernie Sanders.

Kitted up with tweeds, tortoiseshell glasses and a unkempt, wispy “mad professor” hair, Hugh Grant’s historian character, “Tennyson Foss,” says in offhanded fashion, “Polarization is the problem of our age, and not just in America, in the actual world, too.”

Meanwhile, Leslie Jones, as a psychologist who spends the entire show sitting at a bar with a glass of whiskey in hand, puts a finer point on the American mood, with “shit-nose extremists” and their “clown house reality” on the right vs. “whiny wokelords” who cancel each other for “daring to take a dump at the wrong time of day.”

All this polarization feeds into the paralytic response to COVID-19, which “even as it inches towards them, millions persist in going about their every day lives,” Fishburne says with a note of tired disbelief.

Alongside Jackson, Grant and Jones, we spend some time with Queen Elizabeth II (played wonderfully by Tracy Ullman), a suburban soccer mom who doesn’t seem to be aware that she’s been radicalized as a white nationalist, a brilliant scientist whose nuanced explanations of COVID-19 are ignored by the filmmakers themselves, an insufferable social media influencer who has leveraged all the crises of the year to benefit his brand, a shady billionaire who also has profited off the human misery of 2020 and a Kellyanne Conway-esque White House spox (Lisa Kudrow) whose gaslighting is positively blinding.

Joking about the awfulness of 2020 does get old, and will only get more hackneyed as we sail on into 2021; even these comedians — some of the finest in a generation — couldn’t get past the seriousness of some of the gags they were running. The George Flloyd protests and Black Lives Matter marked moments of seriousness and genuine pain in Death to 2020. Likewise, the mounting rage at the Trump administration’s assault on democracy following the election felt all too real.

Regardless, it’s a laugh-out-loud retrospective that gleefully hammers all the final nails in the year’s coffin.