Stories of end times for humankind have been around for millennia. Likewise, generations of moviegoers have flocked to flicks depicting various apocalyptic scenarios. Whether they’re drawn to classics of the genre like Planet of the Apes, Dr. Strangelove and Blade Runner, or prefer more recent takes on doomsday like Waterwold, 12 Monkeys, The Postman, Armageddon or Mad Max Fury Road, this genre’s well runs quite deep.

Here are a few of my favorites in post-apocalyptica that skirt the edges of the genre in an attempt to breathe new life into the end.

Decades of human infertility have left society on the verge of collapse. Meanwhile, asylum seekers flock to the UK in search of sanctuary, but are placed in cages by a police state unable to come to terms with the collapsing world. Clive Owen plays a former activist-turned-burnt out-everyman caught in the middle of the unrest, as he is asked to aid a refugee to safety when she suddenly — and miraculously — becomes the first woman to become pregnant in two decades. There is a gritty, cosmopolitan veneer to this film, depicting end times not as a series of explosions and Hollywood catch phrases, but a contemplative attempt to find the humanity when all around you have lost theirs. 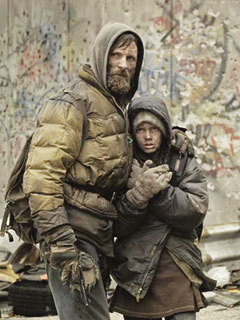 Viggo Mortensen and Kodi Smit-McPhee in ‘The Road.’ Courtesy image.

In this excellent adaptation of Cormac McCarthy’s book about a man and his son trying to survive in a post-apocalyptic world, Viggo Mortensen’s chemistry with on-screen son Kodi Smit-McPhee still forms a lump in my throat. His fight against a dying world to make sure his son lives on is both realistic and terrifying, especially when coming to terms with what mankind will be like at the end. After an unnamed global cataclysm triggers an extinction event, father and son scavenge for supplies and head to the coast where it will hopefully be warmer, but roaming gangs and other dystopian characters lurking amid the rubble challenge them along the way. There is a subdued tone to this film that perfectly matches that dark western gothic cadence that is McCarthy’s style.

This film starring Steve Carell and Keira Knightley sets the tone immediately when Carell’s character and his wife are sitting in a car together listening to a radio broadcast about an asteroid headed for Earth. After the broadcast, the wife takes one look at her husband, contemplates the future for a second, flings open the door and bolts at top speed with no goodbye or explanation. That sets up Carell’s character to meet a stranger (Knightley), who becomes, well, exactly what the title suggests. This is one of the first times I’ve watched a doomsday film that tried to honestly portray what social life would be like if such an event were to be announced. It avoided some of the most common tropes and instead showcased a strange 11th-hour relationship developing between two unlikely companions before the end of times.

Some like Seth Rogen. Some despise him. I’m ambivalent, but he did succeed in his directorial debut with Evan Goldberg in creating an end-of-the-world comedy that was unlike anything before it. Filled with cameos of the Judd Apatow/Seth Rogen crew of ne’er-do-wells who all play themselves, the story takes place when Jay Baruchel arrives to visit Rogen and ends up tagging along to a housewarming party hosted by James Franco. When Baruchel and Rogen step out for a moment, beams of blue light stream from the sky and start sucking random people into the void. Then an earthquake strikes and the partygoers scramble outside to see that a sinkhole has swallowed L.A., which is apparently unharmed except for Franco’s house. End of the world hilarity ensues, with the highlight being a coked out Michael Cera’s roundhouse kick of a performance that had me in stitches.