The pipes, the pipes are galling

Adventures in trying to learn a seemingly impossible instrument

Over the past 30 or so years I’ve been playing music — which began with recording fart sounds on my Casio SK1 — I seem to have acquired a small rogue’s gallery of some of the least universally loved instruments. 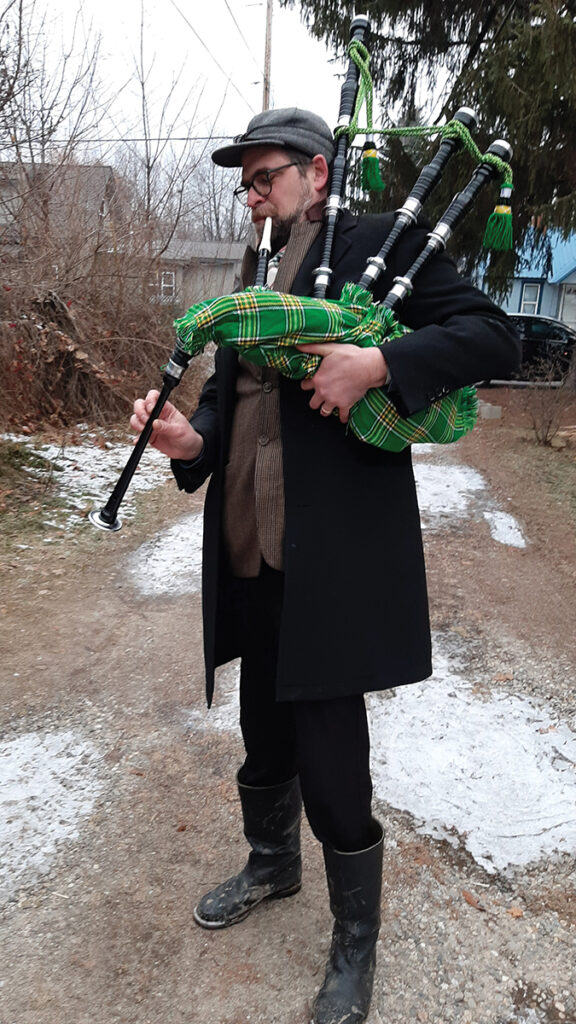 It started with the saxophone, which I played on alto in my elementary and middle school years, followed by tenor from freshman year of high school until I drifted away from it during my junior year of college. A few years later, following an offhand comment to my mom, I received a lovely little blue and white 12-button Marotta accordion — dubbed “Pearl” and a frequent guest around backyard fires.

Most recently I acquired an autoharp, which I was just starting to get the hang of before its ancient chord bar fell off, and, the pièce de résistance, unwrapped a set of bagpipes on Christmas Day 2020.

To be clear: I am profoundly mystified by the bagpipes. Unlike those other instruments, which make some basic intuitive sense in terms of their operations, I can barely even hold the bagpipes. When I do pick them up, it’s with the awkwardness of a man trying to handle an enormous dead jellyfish with harpoon shafts sticking out of it. When I put my mouth on the blowpipe — a term that sounds disturbingly organic — it feels like I’m romancing a giant extraterrestrial spider.

The whole thing is a complete mystery to me and the other parts of bagpipe anatomy are equally strange sounding: there’s a non-return valve; a chanter with a chanter reed; the bass drone and tenor drones, with their drone reeds, tuning slides, ring caps and projecting mount, all of which fit into a set of stocks protruding from the bag like aortae from a deflated heart. You have to whip the stocks — that is, tightly wrap them with hemp string — and there’s a part of the drones called a ferrule, which I suspect is some Gaelic word thrown in just for fun.

Compound all that with the drones reeds, three of which need to be inserted into the bottom of the drones and pushed into the stocks, and I marvel that this instrument was ever even created. As a former player of a reed instrument, the idea of having four reeds to deal with at once — including the chanter reed — is mind-boggling. I may have bitten off more than I can blow.

And this is all just the construction of the bagpipes — a process that took up about an hour of my Christmas morning, as I navigated the included instruction documents that read as if they’d been translated from pre-15th century Scots into Chinese, then Portuguese and into modern English.

Don’t believe me? Try this on for size (all the following spelling and usage appears in the original text):

Correct me if I’m wrong but, based on this tutorial, bagpipes are essentially a one-man-band for your left arm, though I’m not sure it’s physically possible to simultaneously support something with your left shoulder and left hand — all while fitting it under your elbow, regardless of whether it’s your “fit elbow.”

Anyway, despite these mind-bending obstacles, I managed to put together my pipes and even make a sound, though by “sound” I’m speaking in the academic sense. I and other people around me could hear the result of all those reeds vibrating from the air I was forcing through the bag — which I tried hard to “thump … whilst continuing to blow” — and what they heard can be described with 100% accuracy as a group of no more than four cows suffering in extremis.

Am I daunted by this? A little. Am I irritated by this learning curve, which is steeper than the crags outside Edinburgh? Absolutely. But I will persist. And if ever you felt intimidated about trying a new musical instrument — even one that was seemingly invented by those extinct aliens in Prometheus — then think of me and my modest herd of sonic bovines, which I will continue to thump from my bag until I can make people weep with “Amazing Grace.”