Climate change is driving expanded tick habitats elsewhere in the U.S. We don’t know when — or if — the same will happen in Idaho

As if the idea of a blood-sucking arachnid latching onto your tender flesh isn’t reason enough to shudder, ticks are getting more creative with the ick-inducing horrors they deliver. 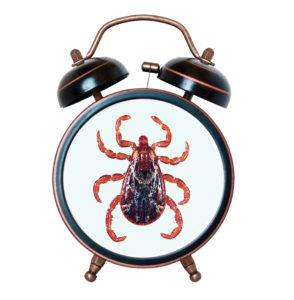 The lone star tick, found mostly east of the Rockies in the United States, is depositing a sugar molecule called alpha-gal into its hosts, which can sometimes “trigger an immune system reaction that later produces mild to severe allergic reactions when they eat red meat,” according to the Mayo Clinic. Those reactions look like a typical food allergy — hives, facial swelling, shortness of breath or anaphylaxis, abdominal pain and headaches — but symptoms don’t appear until hours after eating, making the condition hard to diagnose.

The spread of tick-borne alpha-gal is making headlines elsewhere in the U.S., but is it something to worry about in North Idaho? It doesn’t look like it, according to Dr. Shirley Luckhart, a professor of entomology at the University of Idaho.

Luckhart said the most recent research, published in May, concludes that alpha-gal is limited to the lone star tick, which so far hasn’t made it out West. However, Truthout reports that lone star ticks are on the move into the northeastern stretches of the country as a result of climate change, which is helping expand tick-conducive habitats.

While lone star ticks may not be present in Idaho — go ahead, eat that steak — the Gem State has its own tick troubles to consider. The state lacks the resources to adequately track tick populations and based on anecdotal evidence, Lyme disease, which experts say shouldn’t be present here, seems to be making the rounds even among people who haven’t traveled outside Idaho’s borders.

Idaho is home to the brown dog tick and the Rocky Mountain wood tick, according to the Centers for Disease Control and Prevention. Dave Hylsky, staff epidemiologist with the Panhandle Health District, said those recreating in the North Idaho woods have four tick-borne illnesses to look out for: Rocky Mountain spotted fever; relapsing fever; Colorado tick fever; and tick-borne paralysis, which happens when a tick injects a toxin into the body that cripples the nervous system for as long as the tick is attached.

Hylsky said human cases of those ailments are rare in North Idaho, coming up a couple of times a year or, in some years, not at all.

But tick paralysis isn’t limited to humans — something Clark Fork resident Mary Franzel didn’t know until her dachshund Zip lost control of her back end after a hike.

“Zip literally was tipping over,” Franzel said, “and her back legs were not functioning hardly at all.”

Hiking with Franzel that day was a veterinarian friend who first noticed Zip’s strange gait. They were able to find and remove several ticks, and now Franzel said she’s serious about making sure all her dogs are given a topical tick medication starting in March to avoid the ordeal ever happening again. Had she not invited her vet friend over that day, Zip’s story could have had a different ending.

“I don’t even want to think about what would’ve happened had I been gone all day,” Franzel said.

Lyme disease: Is it here?

A post published on the Sandpoint Reader Facebook page July 14 asked for “tick stories” — anything from memories of tick-heavy summers to tales of trying to remove the pesky blood-suckers to reports of contracting tick-borne illnesses.

Surprisingly, of the 16 responses, nearly a dozen talked about having or knowing someone who has Lyme disease.

Lyme disease is spread by the bacterium Borrelia burgdorferi. The illness is known to cause fever, headache, fatigue and a skin rash. If Lyme is left untreated, the infection can spread to the heart and nervous system.

Blacklegged ticks and western blacklegged ticks are known carriers of Lyme disease. Neither species is native to Idaho and would have a hard time living in the state’s climate, Hylsky said. The CDC reports Lyme disease cases are concentrated in the Northeast and upper Midwest, with 14 states accounting for more than 96% of cases reported.

Still, Hylsky said — and the Facebook responses suggested — that sometimes a person is infected with Lyme disease even without traveling outside of Idaho. In 2017, the CDC recorded 15 confirmed cases of Lyme in Idaho citizens.

“These ticks may be being brought to the area on individuals, pets, transportation, and they might be able to survive a season,” Hylsky said. “We don’t fully understand it right now, but we haven’t been able to identify any [Idaho] ticks with Lyme disease.”

Hylsky and Luckhart agreed that research into Idaho’s tick populations and how they might be changing is severely under resourced. Nonetheless, Hylsky is confident Lyme is not yet as serious an issue in North Idaho as it is in other parts of the country.

“If it was endemic in our tick population, we’d be seeing more cases because of all of the outdoor activity in this area,” Hylsky said.

The future of ticks

Alpha-gal and Lyme-spreading ticks may not be known to call Idaho home, but that doesn’t mean Idahoans can write them off completely.

Luckhart said ticks are expanding their ranges throughout the country due to climate change, including both warming and precipitation trends. Luckhart has been working with officials in Alaska to develop resources for better managing and understanding that state’s growing tick populations.

With no prior surveillance program, it’s unknown how many ticks are in Alaska. In an effort to catch up, officials are collecting specimens for testing. The number of ticks submitted to the state veterinarian have steadily increased since 2015; but, whether that increase is thanks to public awareness or a rise in tick populations is unclear.

What is known, however, is that at least two non-native tick species — the American dog tick and the brown dog tick — have established populations in the state.

“We have the benefit in Alaska that because we’re so far north, we haven’t seen the epidemic of ticks and tick-borne disease that people have seen in other parts of the lower 48,” said Micah Hahn, professor of environmental health at the University of Alaska Anchorage, in an interview with Anchorage-based KTUU news in April. “If we’re prepared and we’re looking for these ticks we can really be at the forefront of the problem.”

As research accumulates and national trends are mapped showing that ticks are on the move throughout the country, some Idaho experts and residents alike agree that more should be done to track their migration in order to get ahead of the health risks they pose.

“They are some nasty creatures,” Franzel said.