With 13 state delegates to sort out between Bernie Sanders and Hillary Clinton, voters were loud and energetic for their candidate. For longtime party members, the night was unprecedented. 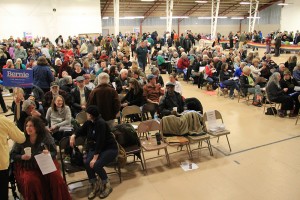 “It’s crazy—just unbelievable,” said Bonner County Democratic Chairman Ken Meyers. “We have people who have never participated in the election process coming out in droves.”

That was especially true for the Sanders camp, who brought the Vermont senator 10 delegates from 716 votes compared to Clinton’s three delegates from 185 votes. Those delegates will travel to Boise for the state convention. From there, Idaho Democrats will select 27 delegates to send to the national convention.

While the clear majority of Bonner County caucus-goers were Sanders fans, good spirits prevailed in the Clinton side of the room. Most were excited to see the level of interest in the election, and despite some a few boos from the Sanders camp against Clinton, the night largely maintained a friendly atmosphere.

“I think it’s fantastic for such a small community [to have this turnout],” said Marge Carlson, a Clinton supporter.

“This is my first caucus ever,” said Claire Hansinger, a Sanders supporter. “I’m excited to see how it works and how it turns out tonight.”

In the opening ceremony, Meyers thanked the hard work and volunteers that made it possible. He also honored Laura Bry, a prominent local Democrat who passed away last year, to enthusiastic applause.

After a run-down of the caucus procedure, representatives of the candidates tried to persuade voters to their side. This process was repeated after each round of voting

John Cooper, 22, spoke on behalf of Clinton, promoting her advocacy work and her accomplishments as a first lady, senator and secretary of state.

“When I think about who I want a president to be, I want her to be a fighter and a uniter,”  Cooper said.

“In the last 10 years in Idaho, we have seen fewer opportunities for working class families and individuals, young and old, to make and sustain decent lives in our current economy,” Garvin said.

No one spoke up for the undecided camp or  Rocky De La Fuente, whose sub-caucus held one lonely delegate chair off to the side of the auditorium.

Next came an opportunity for state candidates to promote their campaigns. Ken Meyers, a candidate for the District 7 senate seat held by Sheryl Nuxoll, sharply criticized the Republican-dominated Idaho legislature, saying lawmakers needed to revamp their priorities.

“Three of the first things that come to mind are what I call the three E’s: education, economics, environment,” Meyers said.

Kate McAlister, challenger for the District 1 representative seat held by Heather Scott, also emphasized the economy, environmental care, access to public lands and broad-based representation. She said her opponent had failed to accomplish those goals in her freshman term, instead representing ideological interests.

“This is why I am running for your state representative—because I could not take it anymore,” she said.

Jessica Chilcott, running for the District 7 representative seat against Shannon McMillan, had harsh words for her opponent’s votes against seven of eight school budget bills, citing the Spokesman-Review’s reporting that she was unable to explain her vote record.

“If anyone is wondering why I’m running, it’s because Shannon McMillan is horrible,” Chilcott said.