During the normal Lost in the ‘50s festivities this weekend, one corner of Sandpoint will take you back to a different ‘50s; one complete with dragon slayers, knights, sword fighting and epic rock music. 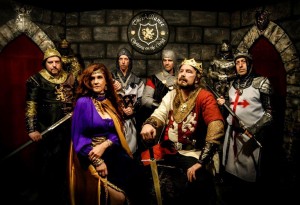 Head to the Granary parking lot outside of Evans Brothers for “Lost in the 1450s,” a day full of full featuring a bike swap, bike rodeo and culminating with a theatrical performance by medieval rock band The Alliance.

Combining the elements of live theater, historical reenactment and progressive rock influenced by such bands as Kansas and Rush, The Alliance is the brainchild of frontman and songwriter, his majesty Jay Trocke.

I talked with Jay about the formation of the band, the positive message they promote, and just what in the heck we should expect this weekend.

BO: How did this whole thing start with the Alliance?

JT: We started in Japan. That’s when The Alliance formed. I was living in Japan and started writing material. Getting back to the states is where I thought, all the songs have that rennaisance type theatrical type mood to them. It morphed from there. When I was a kid, I always liked to pretend I was sword fighting or slaying a dragon. How could you not be thrilled with knights and horses and kings and queens and battering rams? I also like that we have a spiritual tone to it – it’s all positive and for all ages, from five to 85 … back in those days, no matter what your position, your word meant something. It was about courage, honor. It wasn’t just words, it was a way of life.

BO: You combine elements of story-telling, theater and music in your performance. How did that come about?

JT: It’s one thing to tell a story. It’s another to be in a castle. We set our castle up, we all dress in period pieces. My wife plays the keyboard, she’s the queen. I’m the king. All of our players are knights from different areas. We mix it all up because we are the alliance. Back in those days, there were alliances between countries. If you didn’t have an alliance with another country, you better watch out.

BO: And what about the live action and sword fighting going on during your music set?

JT: We’re hooked up with the North Idaho Boffering and LARPers, which is a group of people who get together with swords and light armor. [Boffering is weapon play with lightweight weapons to avoid injury, LARP stands for Live Action Role Play] They go out and boff and larf, create little battles. It’s an all ages thing. I saw them out boffing and larfing and introduced myself and told them what we do, and they said it sounded great. It’s taking it to the next level.

BO: I’ve seen a lot of historical reenactment groups popping up in recent years. Why do you think it appeals to people more and more nowadays?

JT: I think it appeals to people because we live in a world of reality. Some people like to get into fantasy a little bit. When you were a kid, didn’t you like to role play a little bit, to take a little out of the harsh reality?

BO: You guys all play in full dress, with armor, tunics, the whole nine yards. Is that tough playing with all that gear?

JT: It takes a little bit to get used to. When you’re in a castle and all the props are up there, you get used to it pretty quick. These costumes are fairly light. Mine’s probably the heaviest. When it comes to tunics, nothing fits too tight, so you get some room to breathe. It is tough to play with gauntlets, though. Now, we almost rely on the costume. We’re not in character yet until we get into the costumes.

BO: What should we expect on Saturday?

JT: In the morning there is a bike swap meet, then around 3 p.m. there’ll be a bike rodeo, going around cones and jumps. Like a BMX track. Then at 4 p.m. we’re going to kick it off with music and our performance. If the weather is nice, we’ll play outside in the parking lot, but if it’s rainy, we’ll be in the warehouse. Either way, rain or shine we’ll be playing. We research the dress and I’m a carpenter, so I build the backdrops and my wife paints them. Everything’s authentic, in context, in character. We are fantasy and we’re all about the positive message.

Be sure to check out The Alliance at the Evans Brothers parking lot. There will be a $5 cover, and the show will be for all ages. For more information about The Alliance, go to www.thealliancerockband.com or call 208-946-7948.  Rock on!