An interview with: Todd Park Mohr of Big Head Todd and the Monsters

Over 30 years ago, a trio of high school friends in Colorado started messing around and playing music for fun. When Todd Park Mohr, Brian Nevin and Rob Squires — collectively known as Big Head Todd and the Monsters — started playing local clubs in Denver, Fort Collins and Boulder, a live following soon developed around the band. 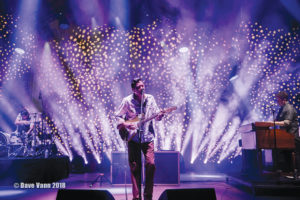 With a unique style merging rock and blues influences with a ‘90s alternative rock and jam band sound, Big Head Todd and the Monsters began seeing some success on the charts. Their 1993 album “Sister Sweetly” went platinum and gave the world one of the most beautiful songs to come out of the ‘90s, “Bittersweet.” More hit singles followed, and the band began their epic three-decade musical exploration of the world, touring relentlessly and sharing their musical gift with their dedicated fans.

Todd Park Mohr took some time last week to have a chat with the Reader about their upcoming show kicking off the Festival at Sandpoint on Aug. 2.

READER: Hi Todd. Thanks so much for taking the time to chat. I read somewhere that you and Rob and Brian all went to high school together in Boulder. Can you tell me about the early days, were you friends before you started the band?

TODD PARK MOHR: Uh, we actually, we went to high school in Littleton, later went to college in Boulder. But yeah, we met in high school. I met Brian through the jazz band. I played sax and he was the drummer. And he knew Rob, and we started playing around then, just like for high school fun. Just kind of developed from there.

SR: Did you have ambitions to be anything else, or did you always want to get into a career in music?

TPM: No, I had ambitions to teach, probably English, which is the only job I thought I could do. (laughs). I ended up getting sidetracked with music.

SR: Well, you’re still kind of honoring that ambition. Songwriting is a very creative art. So you guys have been making music almost 30 years now, right?

SR: Is there one aspect of the industry that you’ve seen change the most over time?

TPM: Well, obviously the delivery method has changed several times over. We started almost before CDs. So, now we’re definitely in a post-CD period. Obviously, along with that the major labels, their style about business kind of went away, for all practical purposes. So that’s been a huge difference also.

SR: Does that give you more control over your music, you think?

TPM: It doesn’t have so much to do with that, I think it as a business overall, there’s no middle, is what I like to say, anymore. Labels used to foster careers. Over many albums, and you don’t have that infrastructure anymore. So there’s a lot of smaller groups and not very many megagroups. And not very many in between.

SR: Yeah, good point. You know, it’s kind of cool how you got to form your musical landscape in the ‘90s. I grew up in the ‘90s, and your music was definitely a part of my own experiences, especially the “Sister Sweetly” and  “Beautiful World” albums. Do you have a favorite era from your past work?

TPM: (laughs). You know, I like “Riviera” a lot, that’s probably one of my favorite albums from our band. But I like “Sister Sweetly” and those early albums also.

SR: You latest album, “New World Arisin’,” seemed to come back to the “Sister Sweetly” style, especially after your “Black Beehive” album which had a bluesier feel to it. Do you try to evolve within your sound, or are you experimenting to find new sounds?

TPM: Yeah, both. We’re always trying to evolve and get better, but we’re also trying to find new territory to jump into. It’s not any fun to play the same thing.

SR: Any fun ways to blow off steam when you’re off the road?

TPM: (laughs) I have a 19-month-old daughter and a 7-year-old stepson, so we have a lot of activity when we’re off the road. The other guys, they love to travel.

SR: Are you based in Colorado?

SR: I went to college in Fort Collins and was really taken in by the musical atmosphere of Colorado. I feel like it produces a lot of good work. Do you think you took something out of the place you grew up?

TPM: Yeah, we didn’t grow up in a music scene. I think that was beneficial to us. I think we were kind of able to pick and choose and be ourselves, and I really love that about Colorado. Actually, right now, it’s an incredibly healthy music scene. There’s a lot of really small seedy bars that have live music. It’s really cool.

SR: So we’re just a couple weeks away from your show at the Festival at Sandpoint, can you share a little of what to expect from your show. Old stuff? New stuff?

TPM: Yeah, probably some of both. We love playing the songs that people want us to play, our hits and stuff, alongside of our new album. We’ve got a lot of music to choose from, and we always take requests, so our set can cover a lot of ground.

SR: What’s next for the band? Any plans for a new album?

TPM: We’re continuing to write and produce music. I think we’re looking for a different way to release it, maybe podcast or a channel concept. So look for something like that in November, we’re working on it now.

SR: Cool. Well thanks so much for talking with us, Todd. On a personal note, I’ve really enjoyed your work, “Resignation Superman,” “Bittersweet,” those are two songs that take me back. I appreciate what you’ve done.

TPM: Thanks, I’m glad. Thanks for your interest. We can’t wait to be there.

Check out Big Head Todd & the Monsters online at any streaming site, and keep up with their tourdates on www.BigHeadTodd.com. To purchase tickets to their show Thursday, Aug. 2, call the Festival at Sandpoint office at (208) 265-4554 or at