The public turned out in droves Tuesday for another Bonner County Board of Commissioners meeting, this time to debate the merits of a proposed Clagstone Meadows conservation easement.

The agenda item’s primary purpose was to rescind a March 11 letter signed by commissioners Todd Sudick and Glen Bailey that provoked an open meeting violation, an action the Board of Commissioners made in a 3-0 vote. But in the following public comment period, easement opponents and supporters exchanged barbs for about an hour. 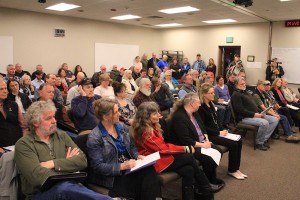 Over 90 people were in attendance at Tuesday’s Commissioner’s meeting. Photo by Ben Olson.

One side called it a case of crony capitalism meant to enrich a large company, while the other said the easement would enhance recreation, conserve valuable wetlands and support Stimson Lumber Company jobs. Supporters also claimed the project was being unfairly maligned by a conspiracy theory linking it to environmental extremists.

“Now we have a situation where the tree huggers and hunters are on the same page, and we have all this conspiracy theory going on,” said Bonner County Republican Central Committee member Debby Trinen, who spoke in favor of the project. “I don’t get it.”

The conservation easement stems from a 2007 development deal, in which Bonner County approved Stimson to develop almost 13,000 acres of wetlands and timber into homes, condos and a golf course. When that project stalled, company and state officials instead pursued a conservation easement through a federal Forest Legacy Program grant. Under the deal’s terms, the acreage would be preserved and opened for recreation, and Stimson would retain ownership and logging rights.

“We saw the value of keeping working forests working while still keeping value of conservation,” said Ray Jones of Stimson Lumber Company at the Tuesday meeting.

According to Idaho Department of Lands Forest Legacy Coordinator Karen Sjoquist, Stimson’s development rights for the property were originally appraised at $12.6 million. That money comes from a $5.5 million Forest Legacy Program grant cleared to Idaho Department of Lands, a $2 million Pittman-Robertson Act grant distributed to Idaho Fish and Game and a $2 million private contribution from a public lands trust. Stimson officials waived the remaining $3.1 million as their contribution to the project.

Over the past several weeks, however, the deal has garnered criticism, particularly from Bonner County commissioners and Rep. Heather Scott, R-Blanchard. On March 11, Sudick and Bailey circulated the letter that triggered the open meeting violation, which said the county had been shut out of the process.

“The agreement requires that all agencies involved coordinate with the county,” Sudick said at the Tuesday meeting. “That did not happen. Period.”

Public scrutiny heated up even more last week, when Scott voiced opposition to the deal in a newsletter.

“What I do not support is using public dollars to reward a corporation for something they could do for free (set up a conservation easement on their own, allow public access and harvest timber),” she wrote.

At the commissioners meeting, Sjorquist and IDL deputy director David Groeschl clarified that the project wasn’t funded through income or property taxes. Instead, the Forest Legacy Program funding comes from royalties on oil and gas companies, while the  Pittman-Robertson Act grant comes from an ammunition sales tax. Both funding sources are earmarked specifically for conservation projects, and if the money isn’t used in Idaho, it will go to some other state. They also argued that Stimson deserved to be compensated for selling the land’s development rights.

“If I were to give up some of my rights [on my own property], I would want to be compensated,” Groeschl said.

Sjorquist and Groeschl apologized that county officials felt out of the loop on the project. But other project supporters said county staff members, Bonner County Planning Commission members and former commissioners had been briefed over the years.

“This whole thing has been a process for four or five years,” said Tony McDermott. “I’m told in fact there was coordination done with the county.”

McDermott and Trinen also bemoaned a purported conspiracy theory connecting the easement to environmental extremists and billionaire George Soros. The accusations may stem from an Idaho Freedom Foundation report released in February that links the Forest Legacy Program with “green radical partners,” according to the Idaho Statesman.

Following the comments for and against the easement, the Idaho Joint Finance-Appropriations Committee cleared Idaho Fish and Game and the Idaho Department of Lands to use its federal funding. But according to Sjoquist, there’s still a long road ahead before the project is complete.