It’s very appropriate that the first big snow of the year has hit this week. It’s almost as if Mother Nature realized the Backcountry Film Festival was hitting the Panida Theater Friday, Dec. 4 and wanted there to be a white blanket of snow covering the mountains surrounding Sandpoint. 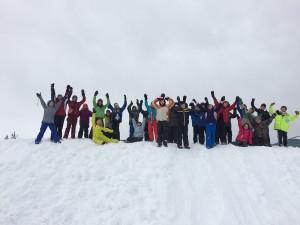 A group of snow school participants. Looks like they’re having absolutely no fun at all, doesn’t it? Photo by SOLE.

In its third annual appearance at the Panida Theater, the Backcountry Film Festival is a venture put on by Winter Wildlands Allliance, a national nonprofit organization based in Boise dedicated to promoting and preserving winter wildlands and a quality human-powered snowsports experience on public lands.

Teaming up with Winter Wildlands Alliance is local nonprofit organization Selkirk Outdoor Leadership & Education (SOLE), whose mantra is to provide transformational experiences that empower participants to become active learners and responsible stewards of their community and its environment.

Proceeds from the Backcountry Film Festival will benefit the Snow School Experience program, the nation’s largest on snow outdoor science program. Snow School hosts over 29,000 participants at 55 sites across the U.S., and we’re lucky enough to have one of those sites here at Schweitzer Mountain Resort.

Every 5th grader in Lake Pend Oreille School District gets to experience Snow School, thanks to the efforts of SOLE’s founder and executive director Dennison Webb.

“It gives kids a sense of place,” said Webb. “They get to go out in the field all day and get to understand the watershed, where our fresh water comes from.”

According to Webb, 80 percent of our fresh water comes from snow pack, which is why it’s important for school children to learn how snow pack affects the climate, and subsequently the habitats of regional wildlife. 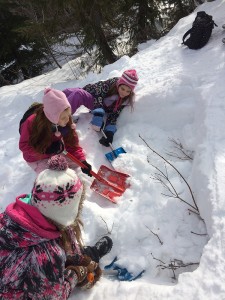 “We cover a lot of different subjects,” said Webb. “We talk about tracking in the snow, we dig snow pits and take profiles of the snow, the hardness, the layers and crystal types.”

One of the most important studies the children partake in at Snow School is determining the Snow Water Equivalent (SWE), the amount of water contained within the snowpack. It can be thought of as the depth of water that would theoretically result if you melted the entire snowpack instantaneously.

“At the 5th grade level, we are taking measuring cups and determining how much will be left when it melts,” said Webb. “They take actual samples in the field and weigh it out on a scale.”

Webb said that SOLE then encourages the kids to compare their results to historical results, and to mark any trends that exist over the last half a century.

“They’re finding these scientific trends on their own, and understanding that a lot of our snow pack is reducing over time,” he said. “They’re doing real science-based readings and plotting these real world problems.”

Of the 250 kids that SOLE puts on the snow annually, Webb said that at least 50% had never been on snowshoes or in the winter backcountry before.

“We’re aiming to get 350 kids to participate this year,” he said, adding that SOLE educates close to 500 individuals throughout the year in all respects.

The main goal of the Backcountry Film Festival this year is to raise enough money to fund an expansion to the program that includes junior and senior high school children also.

“It’s important to create a sense of belonging to the place in which you live,” said Webb. “The snow is a big part of our way of life here. Snow School helps kids build a connection to themselves, their peers, their community, and their local watershed. We want to create environmental stewards. The goal of this is to give kids more accountability.”

The films generally cover the backcountry winter experience, and are directed by filmmakers from all over the world.

The Backcountry Film Festival kicks off at the Panida Theater on Friday, Dec. 4 at 7 p.m. The doors open at 6 p.m., and there will be a holiday silent auction and rockin’ raffle. Tickets are $10 if you buy in advance at Evans Brothers, Eichardt’s, Alpine Shop or online at www.brownpapertickets.com/event/2413711. If you wait until the day of the show, they’ll run $12 each, and $20 will get you admission and three free raffle tickets.