A guide to my favorite knots

In this week’s knot-tying article, we’ll cover four more useful knots: the sheet bend, the figure-eight knot, the overhand knot and half hitch. 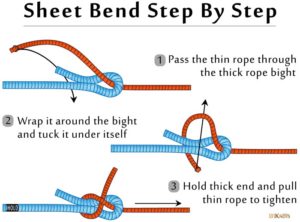 Let’s say you have two ropes of different diameter and you need to attach them. Most knots will see the smaller diameter rope coming undone, but not with the sheet bend. Also called a weaver’s hitch because of its historical use in textile mills, the sheet bend is also fine for joining ropes of equal thicknesses. The “Ashley Book of Knots,” arguably the most important encyclopedia of knots in publication, lists the sheet bend on the first page, which shows how important this knot is.

1. Make a bight (or a loop) in the thicker of the two lines and pass the thinner rope through the bight.

2. Wrap the thinner rope around the bight and tuck it under itself.

3. Hold the thicker line and pull the thin rope to tighten.

4. You’ve tied yourself a sheet bend.

Figure-eight (on a bight) knot 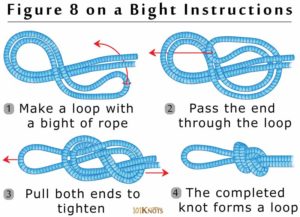 This versatile knot is useful in mountain climbing as it’s quick and easy to tie, and can be tied to help connect a rope to a carabiner. The knot can be made anywhere on a rope, from the middle to the ends. It’s strong and non-slipping, but can sometimes jam under a load, making it tough to untie (a non-jamming alternative is the alpine butterfly knot, but it’s tougher to tie).

1. Make a loop with a bight of rope anywhere you’d like the loop.

2. Pass the end “around the tree” and through the loop.

3. Pull both ends to tighten.

4. You’ve tied yourself a figure-eight on a bight knot. 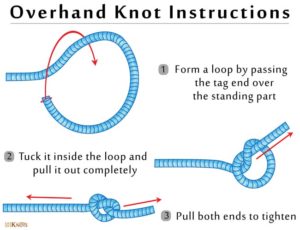 According to the “Ashley Book of Knots,” the overhand knot is the simplest of the single strand stopper knots. It’s the easiest knot you’ll tie in this series, and often the first knot we learn as children when we graduate from velcro shoes to laces. While it’s a secure knot, it can jam badly, making it difficult to untie.

1. Form a loop by passing the end over the standing part.

2. Tuck the end inside the loop and pull it out completely.

3. You’ve tied yourself an overhand knot. 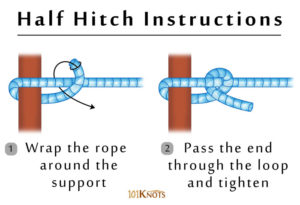 The half hitch is basically an overhand knot with the working end brought over and under the standing part. It’s a fairly insecure knot, but it is useful because it forms the basis for a lot of reliable knots. Its main use is to quickly tie off a line that can be released quickly. When seeking a more secure half hitch, you can tie two of them.

1. Wrap the rope around the support.

2. Pass the end through the loop and tighten.

3. You’ve tied yourself a half hitch.

Read the final piece in this series next week to learn how to tie a trucker’s hitch, a fisherman’s bend and the taut-line hitch.