A red hot play about a ‘Red Hot Patriot’

If you were a female professional in the 1960s, you didn’t have it easy.

Sexism was more overt, the wage gap was even more spacious and male colleagues used your biology as a weapon against you.

“You not only had to do the job but you had to do it twice as well and backwards,” said local theater and film director, Ron Ragone.

That was certainly true for Molly Ivins, who served as a pioneer in female journalism and is portrayed as a down-home Texas firecracker in the play “Red Hot Patriot.” Starting this weekend, Ragone and the Panida Theater are bringing together co-production of the play starring Miriam Robinson with Conrad Mearns in a supporting role. 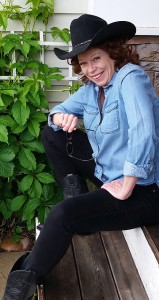 Ragone was inspired to bring the play to Sandpoint after his wife saw it performed in Hollywood starring Kathleen Miller. A well-known local writer and director—and in case you didn’t know, an extremely intimidating but inspiring substitute teacher—Ragone was excited to make it his next project.

The next step was to find the perfect actress to portray Ivins, a role Ragone eventually set aside for Miriam Robinson. He selected her to play this role without even auditioning her due to her work in local play “The Counselor.” Her appropriate age, attitude, and ability to whip out anything from a southern drawl to New York slang sealed the deal. What’s more, Robinson’s background has uncanny similarities with Ivins’, including an upbringing in a military family. With the aid of props and Mearns’ presence as a mysterious additional character in an otherwise one-woman play, it ought to be a heck of a night full of historical anecdotes, witty remarks and southern charm.

Perhaps the biggest draw of the play is the red hot wit of Ivins—a flaming liberal who rebelled against her daddy, debunked politicians and likened herself to the Hell’s Angels. A beer-slinging, cigarette-smoking Texas girl, Ivins’ rowdy attitude was prevalent in everything from the Houston Chronicle to the New York Times to “60 Minutes.” She used her talents to skewer shady politicians, the war in Iraq and any other subject that she had an opinion about, which was almost every subject. It is rumor from Ragone himself that Ivins’ memorable barbs will leave you with a smile long after the play is over.

Ivin’s “good ol’ boy” temperament and fierce wit built her a national reputation, and she became a trailblazer for women who had to do every job twice as well and backwards. A brash columnist and political commentator who expressed herself through humor and sharp remarks, Ivins pierced right through every politician that sprang from her beloved Texas soil.

“So keep fightin’ for freedom and justice, beloveds, but don’t you forget to have fun doin’ it,” she said in quote that captures her essence. “Lord, let your laughter ring forth. Be outrageous, ridicule the fraidy-cats, rejoice in all the oddities that freedom can produce.”
Catch “Red Hot Patriot” 7:30 p.m. July 10, 11, 17 and 18, plus a 4 p.m. matinee on July 19. There will be no intermission during the show. With Panida Theater renovations soon to be underway, the play will take place at the Little Theater, also known as the Panida Playhouse. True to Ivins’ style, viewers should be advised of occasional coarse language. Tickets cost $14 and are available at Eichardt’s, Eve’s Leaves, Pedro’s Pend Oreille Arts Council and at the door.