It’s land passed down through his family that was originally homesteaded by his grandparents. According to Krause, his grandparents were individuals who respected the value of education, community and leaving a positive impact on future generations. That’s exactly why he’s donating the land for the public’s use as a part of the greater Pine Street Woods project. 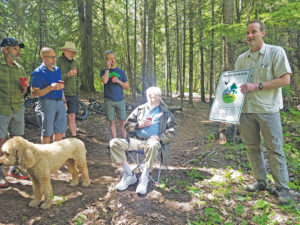 Eric Grace, right, presents a sign to be posted on the trail to Lester Krause, center, who donated the land. Photo by Cameron Rasmusson.

Pine Street Woods organizers gathered with Krause on Wednesday to honor him and his generosity. According to Eric Grace, Kaniksu Land Trust executive director, the land will be named the Manning Buffer and will provide hikers, bikers and outdoor enthusiasts with a convenient gateway to Sherwood Forest and what will become the Pine Street Woods.

According to Grace, Krause had many offers on the property but always turned them down, believing simply selling it off wouldn’t honor the family that had cared for it before him. That was until Grace and Krause started up talks about the future of the property in light of the Pine Street Woods project, a conversation that culminated in a single phone call.

“By the end of the phone call we had come to an agreement by which (Krause) would give the land to Kaniksu Land Trust,” Grace said. “This happened in nine minutes.”

Kate McAlister of the Greater Sandpoint Chamber of Commerce said that gestures like this donation help everyone — even those with no interests in trails. A vibrant array of outdoor recreation options helps draw new visitors and residents to Sandpoint, and that improves the local economy, she said.

For Krause, it was a thrill to see hikers, bikers and trail runners enjoying the land even as the ceremony unfolded. Late in the proceedings, several young people arrived from the trail to thank him for his generosity. According to Krause, it was exactly for youths like them that he donated the land.

The donation is yet another boon for the Pine Street Woods project, which is zeroing in on its $2.1 million fundraising goal to establish a community forest just minutes away from town. According to campaign co-chair Jim Zuberbuhler, the fundrasing recently hit $1.8 million. The last $300,000 push will help fund $200,000 in immediate trail improvements and a $100,000 trust for ongoing maintenance.

Zuberbuhler hopes to raise a good chunk of that at a fundraising banquet tonight — Thursday, May 31 — from 5-7:30 p.m. at the Heartwood Center. If they’re able to complete fundraising this year, it will be well ahead of their June 2019 deadline. According to Zuberbuhler, that brisk fundraising pace is the result of three years of working and five years of planning. The donation of the 20-acre Manning Buffer is just one of those fortunate surprises that often occur in the midst of a project.

“Almost always, wonderful unintended consequences happen, but for those things to happen, you have to show up,” he said. “You have to do the work.”