A look inside the life of a refugee

Between fliers for citizenship classes and support groups, a print-off of Psalm 16 greets visitors of the World Relief Spokane office. “Keep me safe, my God, for in you I take refuge,” reads the first verse.

For many walking into that office, those are no doubt words of comfort. They represent the end of potentially decades of suffering and the hope for a better future. Come Nzibarega, originally from  Burundi, felt that relief after six years in a refugee camp. And Pingala Dhital and her family, natives of Bhutan, spent 18 years in a ramshackle camp hut before finally being granted asylum in America. 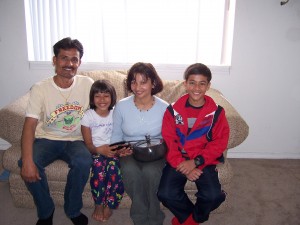 Pingala Dhital with her husband Kamal, daughter Trishna and son Satya, just one day after arriving in Spokane from a refugee camp in Nepal, where she had lived for 17 years awaiting resettlement. Pingala was carrying a pressure cooker because she was unsure that she would be able to cook her lentils without one. Photo by World Relief.

These are just a two of the innumerable stories Mark Kadel, director of World Relief Spokane, has encountered throughout his career. But dramatic stories are inevitable when assisting people who have fled to America for their lives.

“These are people who have a well-founded fear they cannot return to their home country without facing life-threatening conditions,” he said.

Consider Nzibarega, a college-educated man who speaks five languages. He was targeted by anti-government rebels because of his employment in the United Nations peacekeeping initiatives. After being kidnapped by armed rebels and tortured for information, he was rescued by UN personnel. Out of fear for his and his family’s safety, they relocated him to a refugee camp.

“It was horrible,” Nzibarega said of his kidnapping and abuse. “I don’t have the words to describe it.”

For Dhital and her family, the circumstances were different, but the suffering was the same. Ethnically Nepalese, Dhital was one of the thousands of the Lhotshampa ethnic group to be expelled from the country and forced into refugee camps in Nepal. A teenager at the time, Dhital would go on to marry and raise a family in a dirt floor shelter, her children receiving the barest of educations. 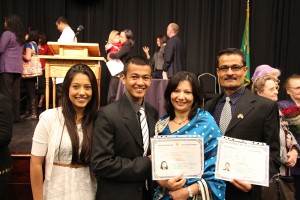 Pingala and her husband Kamal recently obtained United States citizenship after seven years of living in Spokane as resettled refugees. Her son Satya attends Gonzaga and is studying civil engineering, while her daughter Trishna is currently a senior at Ferris High School.

“I had a normal life until 16 or 17 years old, but my children didn’t have any of that,” she said. “I started feeling guilty about giving birth.”

This is a daily reality for untold numbers of refugees, Kadel said. Shelter is minimal, with most sleeping on the ground. Daily caloric intake is often less than half the recommended value.

Refugees come from all walks of life. Some are illiterate and some hold PhDs in their country of origin. They are bakers, barbers, doctors and scholars. Unable to obtain work permits, refugees spend months of inactivity waiting for aid that may or may not ever arrive.

“The richest places in the world are refugee camps, because there is so much trapped potential there,”  Nzibarega said.

Sometimes, refugees’ only common characteristic is the danger to their lives. The nature and severity of their persecution factors into resettlement considerations. For instance, although Christians make up only 6 percent of the Iraqi population, Kadel said 38 percent of Iraqi refugees are Christians because they’re more frequent targets of violence.

According to Kadel, refugees spend an average of 17 years waiting for acceptance into a refugee program. Nzibarega and Dhital both recall the joy they felt when they learned they’d been approved for consideration.

“I had to check my name [on the list] 10 times to make sure it was real,” Nzibarega said. 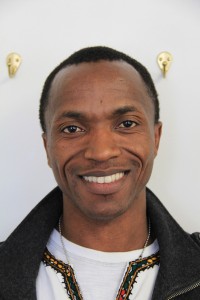 Come Nzibarega from Burundi smiles after telling the Reader about his experience before coming to the U.S. Photo by Ben Olson.

The United Nations High Commissioner for Refugees refers refugees selected for U.S. resettlement to the appropriate authorities, which kicks off the American screening process. Unlike many European countries, the U.S. screening process is an enhanced and lengthy joint procedure between the Department of State and the Department of Homeland Security. It involves several interviews, background checks and health inspections. Nzibarega, for example, was vetted over a 12-month period, with authorities grilling him for inconsistencies or gaps in his story.

“Some questions were very tough,” he said. “I had to remember specific dates and places.”

Once approved for travel to America, the U.S. government issues refugees a loan to cover transportation costs. Dhital still remembers the night that, after a long series of flights, she and her family found themselves looking down at Spokane.

“Look at the lights,” she told her children. “One of those lights is our home.”

Refugees are then referred to organizations like World Relief, which provide them with housing, cultural orientation and temporary public assistance.

“The first thing we do is provide them a hot meal of something they can recognize,” Kadel said. “They sometimes don’t recognize airplane food.” 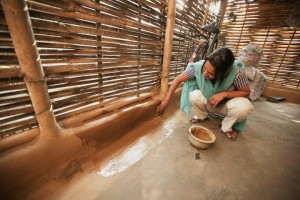 A woman coats her wall in dung to keep insects out at a Bhutanese refugee camp.

The next step is to find them employment, which happens through either job service programs or direct interviews. Nzibarega began work stocking shelves at Walmart—after years in a refugee camp, he was eager for any job available.

Five years after arrival, refugees are able to earn U.S. citizenship, which Dhital and her husband have accomplished. She spent the evening in tears as Washington State dignitaries offered their congratulations.

“This government picked us up out of the trash and gave us respect,” she said. “Who else would have done that?”

Now staff members of World Relief, Nzibarega and Dhital help Kadel in managing new cases, including the controversial Syrian refugee resettlement. So far, the organization has settled one family, with two more anticipated.

According to Jan Reeves, Idaho state refugee coordinator for the Idaho Office for Refugees, Idaho is slated to accept 1,000 individuals for the 2015 fiscal year—700 in Boise and 300 in Twin Falls. He said his office has battled huge amounts of misinformation since the November Paris terror attacks prompted a huge backlash against the program.

“Refugees are contributors to our economic vitality,” he said. “They go to work, they pay taxes, they start businesses.”

Critics of resettlement especially cite FBI director James Comey’s Congressional testimony in November, during which he couldn’t guarantee absolute security from the Syrian vetting process. This is primarily because Syrian databases are weaker compared to those from Iraq or other countries with a more dominant U.S. presence.

“If someone has never made a ripple in the pond in Syria in a way that would get their identity or their interest reflected in our database, we can query our database until the cows come home, but there will be nothing show up because we have no record of them,” Comey said.

On the other hand, there’s never any guarantee of purely noble intentions from newcomers, Reeves said. He believes potential terrorists would likely find other methods easier.

“What is the risk of someone coming in as a tourist and … doing harm to Americans?” he said. “It certainly isn’t zero.”

Officials opposing resettlement also question the ease of Muslim integration into American society. According to a 2009 Harvard Kennedy School study, there are indeed difficulties in reconciling Muslim and Western cultures. But they are not insurmountable and become less pronounced over time.

“In the long-term, the basic cultural values of migrants appear to change in conformity with the predominant culture of each society,” the study reads.

“Cultural differences are a potential fault line that demagogues can exploit to inflame hatred between groups,” the study continues. “But there is nothing inevitable about cultural conflict. Depending on conditions, diversity can be seen either as threatening or as a positive contribution towards the innovation and creativity that makes society and economies adapt successfully to new challenges in a globalized world.”

For his part, Reeves worries that rejection of Syrian refugees poses the true threat. When people feel ostracized by society, they seek solace elsewhere and become more vulnerable to radicalization. By abandoning national principles out of fear, Reeves believes we’ve handed terrorists a victory.

“Fearful language and rejection of people based on their religion is exactly what ISIS wants us to do,” he said.