Until I googled the phrase never say never, I had no idea that Justin Bieber had a hit song and a movie with that title. I guess a 60s guy (in my 60s and growing up in the ‘60s) shouldn’t be expected to be familiar with a teen heartthrob’s playlist. I was blown away there were almost three billion results on Google — most of them related to Bieber. 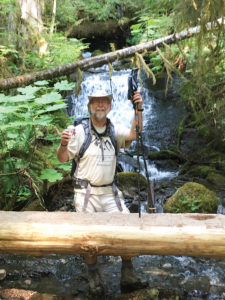 The reason I googled that phrase was in hopes of finding something inspirational to use in this column. Developing a theme each month for Shake, Rattle and Roll can be easy — or not. As deadline time comes closer and closer, I start to scramble. For some reason this phrase (never say never) came to me as the title; that was the easy part. Now I must write a few hundred words about never. For any students out there, if you have trouble putting an essay together I have some disturbing news: It never gets easier, but you’re in good company.

Many readers are familiar with my PasstoPass.org story from last summer. It was a 58-mile hike on the Pacific Crest Trail to raise funds for Parkinson’s research. Aside from spending a small fortune on new gear (I hadn’t backpacked in almost 50 years), I simply wasn’t prepared mentally or physically. Throw in blisters, cramps, multiple hornet stings, mild dehydration and so forth, much of it was a miserable experience. Ultimately, I was glad I finished and made some incredible friends. While it was worth it at the end, I was determined never to repeat the experience.

The bottom line was I decided, announced and carried through with my decision to never repeat that adventure. My middle grandson, Brandon, graduated last month. For Christmas and graduation, I gifted him with my new REI backpack, solo tent, sleeping pad, water filter, titanium cooking pot and more. Even if I wanted to go on the hike this summer, I had no gear. There was no way I was going to have another adventure like that one: never! I felt smug and satisfied that I had made a good decision and, at the same time, ensured I could not go back on my decision.

New Year’s came and went, and time continued to pass. When I traveled to Miami, Washington D.C., and New York for the Parkinson’s Foundation last fall and this spring, I told everyone I knew about my adventure and about my decision to never do a similar hike.

I suspect by now, everyone has figured out I signed up to do it again. What changed my mind? What has convinced me to never say never? Friends from last summer continued to bug me about going again. Knowing that some people have time restraints, the organizers decided to have both a 32-mile hike and a 58-mile hike; people can choose to do one or the other or both. Research is my passion and PasstoPass raises funds for research raises awareness about PD. My hiking friends said they would loan me any gear I might need if I participated. The only item I had to purchase was a new backpack — thanks, REI. One of our new neighbors is an avid hiker and agreed to do some training hikes with me. Experience is what you get … right after you need it. I now have the experience, and if I knew then what I know now, I might never have said never.

Putting all of that aside, the biggest reason to do it again is Brandon (the grandson with all the cool new gear) expressed an interest in being a support hiker and doing the trip with me. Brandon has done some hiking on the PCT in California and is enlisting in the U.S. Navy this fall—following in the footsteps of a great-grandpa he never knew. How cool is it we can complete this adventure together?

I remember hearing someone (probably my own old English teacher) say you should make your words soft and tender — you may have to eat them. I’ve been munching on the word never for a while.

In closing, I’ll use another famous quote (from Winston Churchill) that uses never in a completely different context that is appropriate for the Parkinson’s community: “Never, never, never give up.”