An interview with: Greensky Bluegrass

For nearly two decades, the members of Greensky Bluegrass have created their own version of bluegrass music, mixing the acoustic stomp of a stringband with the rule-breaking spirit of rock and roll. As headlining artists of the Festival at Sandpoint, the band members shared their thoughts on their recent projects and their busy touring schedule.

Sandpoint Reader: As you can imagine, bluegrass has a very strong fanbase here in the Inland Northwest. For bluegrass fans perhaps unfamiliar with your music, how would you describe your unique take on the genre? 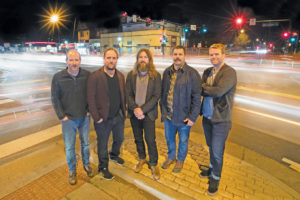 Theoretically speaking, “Greensky” is the opposite of “Bluegrass.” The fact that both words are in our name sums up the idea of the band pretty well. We play bluegrass instruments, yet we try to infuse the music we play and write with something more. We all have lots of influences outside of bluegrass … from rock and roll to jam bands to jazz to reggae to hip hop to classical to southwestern Norwegian death metal. … In addition to bluegrass, these other things are what made us who we are and helped create the kind of music we make.

SR: Tell us a little about the band. How did you all get together and start playing?

We grew from a pretty informal open-mic play-around-town kind of thing.  Things got more serious.  We traversed the country a bunch of times. A bunch. In vehicles that grew. Bigger every few years. Now we no longer drive ourselves. And we have a bunch of friends along for the ride to set up lights and make us sound nice.  That helps. A lot. Thanks guys! We did it for one main reason — the most important — because we enjoy it.

SR: How do you collaborate in writing music?

While recording our albums, we have to make choices — choices that will be heard over and over when people listen to our album. Permanence. We have to take the energy and freedom we create live and harness that into how we want a piece to be perceived in its most “official” rendition. So it makes us really observe how we create texturally and musically in the bigger picture. We take these reflections and choices and apply them to our approach onstage. While we remain open and adventurous in our live setting, we’re definitely learning what works best for us, how to communicate that clearly and consistently, and thus how to make the greatest impact in any given importance. Every musical experience we have together, awesomely satisfying OR difficult and disappointing (we’re human), makes us each understand our partners better. Always a lesson to be learned.

On a day to day basis, I think that we mostly inspire each other musically. We’re on the road playing shows almost 200 days out of the year, so to say that we are immersed in the music we play with each other would almost be an understatement. Beyond that, I think we all draw inspiration from the idea of getting our original music out there to fans. We are lucky enough to really believe in what we are doing and creating and want people to hear these songs. It’s an interesting thing to say that we draw inspiration from that, but it really is true! When fans get excited about our music and our songs, it is a truly powerful thing that keeps us creative!

I don’t have a magic crystal ball nor am I a foremost authority on the subject, but I believe bluegrass music will, like many other genres, fluctuate in its popularity. It’s really interesting for me to watch the way the genre as a whole is evolving as younger musicians become the next round of trendsetters in bluegrass. The traditional side of the music will always be there, but it seems to me that the real musical growth is occurring with the bands that are breaking out of the bluegrass cage and taking over the zoo.

SR: It appears that you maintain quite the rigorous touring schedule. Does the band enjoy life on the road, or does that get a bit exhausting after a while?

I’m just continually grateful that we get to continue to do what we do. Somehow Greensky has become something so much greater than the band itself, and I’m awed each time I see it. I continue to look up to all the guys in this scene that I’ve always looked up to, and it’s rewarding to know also that we’re inspiring and influencing the guys who are going to take this thing even further. Who knows what the year will bring in terms of life and music-making experience, and I think that’s what keeps Greensky ticking in this often restless world of the touring musician: the people we meet, the scenes out the window of the bus, the crowds we play for, the spontaneous onstage pop-song teases. We have a lot of fun, and that’s what’s keeping us sane, and that’s what keeps us going from year to year. Come out and share in the revelry!

SR: Tell us what the band is working on these days. Do you have any new songs or albums in the works?

We’ve got some buns in the oven. Is that what that phrase means?

SR: Thanks so much for taking the time to answer our questions. In closing, is there anything else you want to say to fans before you play here in Sandpoint?

Yes, we are just so phenomenally lucky to have fans that want to see us over and over again! Sometimes three nights in a row, sometimes more… it’s amazing. They believe in what we do and that improvisational moments matter. So much of what we do is based entirely on improvisation and the fact that our fans are with us, collectively peering over the edge of the cliff with us, it means the world to me and enables us to truly do what we do.