Gardening with Laurie: Contrast in the garden

Contrast is useful in any garden design. Contrast draws the eye. It’s dynamic. It grabs the attention, and brings certain areas into focus. It can be created using many ingredients: flowers, foliage, texture, color, value and hardscape. It’s the principle of sturdy rhododendrons vs. feathery grasses, rough pine bark vs. smooth hosta leaves, white flowers in deep, dark shade, or tiny sedums in front of and around large rocks. Contrast is why low, soft plants like thyme or anemones spilling over stepping stones, gravel, or concrete paths are so effective. The hardness of the path would be rigid and harsh with nothing soft by it. 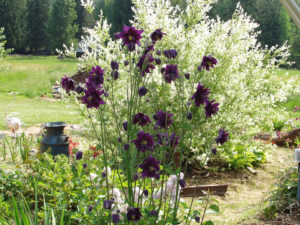 On one corner of my house, the pale pink flowers of the ‘Black Beauty’ elder create their own contrast with its dark purple, almost black foliage, but it’s fleeting. On either side of ‘Black Beauty,’ though, are two large shrubs that bloom with white flowers for long periods of time. ‘Limelight’ hydrangea has huge bloom clusters that start out greenish-white and stay white for some time before aging to antique pink, while ‘Darlow’s Enigma’ rose is just as tall as the elder and is covered in large clusters of small, single, white roses from early summer through fall. I’ve repeated this combination on the other corner of the house: a white ‘Bridal Veil’ astilbe lives in front of purple-leafed ‘Summer Wine’ nine-bark. For equal interest, but more colorful, contrast, think about the chartreuse yellow of the soft billows of lady’s mantle blooms in front of fiercely upright dark purple bearded iris. That one uses not just contrast of colors, but of leaf form and structure of the plants.

Even in an all-one-color garden, contrast can be had. Contrast can be the same color, but lighter and darker values of it. Think about the soft blue of a blue spruce with the dark, saturated blue of ‘Blue Jay’ delphiniums, or pale forget-me-nots with intense ‘Georgia Blue’ veronicas. If you have an all one color garden, take a picture of it, download it to your computer, and turn the saturation all the way down so you have a black and white photo. You can easily see what values of dark and light you have with color removed!

Don’t think of just color; all season long contrast can be had via texture and shape: big, solid, hosta leaves with feathery plumes of astilbes; wispy grasses with heart-shaped brunnera leaves; or the natural cone shape of a dwarf Alberta spruce planted in with arching, sprawly, potentillas or ‘Bridal Wreath’ spirea.

Think about how a woodland garden, which is usually all in shades of green, have a mix of textures: ferns, hostas, conifer trees, trilliums, and violets. This kind of design is very casual and more natural seeming than rows of annuals all the same height and color.

Too much contrast can be hectic and not relaxing; there is nowhere for the eyes to rest. Use it like a seasoning; you don’t want to overwhelm a soup with too much salt or pepper, but moderate doses of it bring the soup to life.