Of all the interviews I’ve conducted with famous people, my conversation with Michael Winslow was easily my favorite. Dubbed “The Man of 10,000 Sound Effects,” Winslow has appeared in such comedy classics as “Spaceballs,” “Cheech and Chong’s Next Movie and of course, as “Motormouth Jones” in the “Police Academy” films. Aside from acting, he is widely regarded as one of the pioneers of beatboxing. 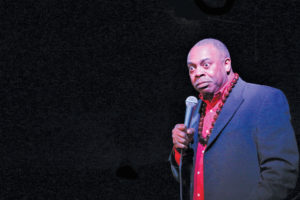 Winslow is also a stand-up comedian, blending his off-the-wall impressions, sound effects and mouth-generated covers of famous performers like Jimi Hendrix and Led Zeppelin. He’ll be showcasing his unique brand of comedy at the 219 Lounge for two days on Friday Feb. 22 and Saturday, Feb. 23. The doors open both nights at 7 p.m. and the show begins at 8 p.m. The show is hosted by Morgan Preston and will also feature comedian Phillip Kopczynski.

Below is just a short snippet of the hilarious conversation I had with Winslow. By the time I hung up the phone my cheeks were hurting from laughter. Another satisfied customer.

Sandpoint Reader: Hey, Michael, thanks so much for taking my call.

SR: We’re getting pounded. There’s at least a foot on the ground, and it just keeps coming.

MW: I remember all that. I used to live in Spokane.

SR: That was going to be my first question for you. I read that you grew up in Spokane.

MW: Yeah, my dad was at Fairchild Air Force Base. I remember it all, man. Every single bit of it.

SR: So, what was it like growing up on an air force base?

MW: Interesting. I also lived in an air force base in Montana, which was a great place to be if you were a truck tire, or a spent shell casing. But it was a unique experience for me, so I was fine with it.

SR: Do you think that impacted the way you developed your vocal talent?

SR: I hear that so much from a lot of comedians, that their abilities were developed more as a defense mechanism from the cruelty of children.

MW: Sure it is. And where do they learn it from? Everybody else. I ended up making my own movie soundtracks, my own TV shows, where I’d turn the sound off the TV and do the soundover for myself.

SR: When did you first notice you had a unique talent?

MW: When they were beating you up to make you shut up, you think, “Hey, maybe I am good at this.” Maybe this is what I’ll do. I was watching weird TV shows, like “The Copycats” and “Rowan & Martin’s Laugh In,” which was Goldie Hawn’s first gig. I kept going, “Jeez, who the hell are these people?” and my brother and I used to fight over the TV because “Star Trek” would run at the same time as “The Monkees,” so he would tie me to a chair and force me to watch “Star Trek,” which really made me mad until I figured out how to make the noises. Then he was like, “Let’s go back to watching ‘The Monkees,’” and I’d say, ‘It’s too late.” This was back when Shatner had hair.

It was the sounds that did it for me. I used to listen to the soundtracks closely. The creepy sounds on shows like “The Outer Limits” and the “Twilight Zone,” and “Night Gallery,” which was one of Steven Spielberg’s first gigs. When I watched these shows, I realized how noises were so important, like that sonar noise, and how they would slow it down, lotta weird stuff. The noises in the Bat Cave, when he’d turn the Batmobile on. Also, whenever the criminals would show up, the cameras would always tilt 20 degrees to the right. Simple effects, but effective. Then Bruce Lee showed up, and I was like, “Wow.”

SR: I’ve seen your Bruce Lee bit when I was younger and remember cracking up at it.

MW: I want to do a whole movie like that. But I want it to be Mel Brooks funny. That’s what I aim for, the Mel Brooks level of humor.

SR: It’s that humor that pushes the envelope just enough to make you feel uncomfortable.

MW: Right, that’s Mel Brooks’ style of humor, man. When I was in “Spaceballs,” that was what it was like. He was using the formula all the way. There’s some wild stuff on the cutting room floor that you’re never gonna see.

SR: Was there a lot of improvisation during “Spaceballs,” or were things pretty well scripted out?

MW: Oh no, some of it was scripted, but some of it was not. Things were going fine until one of the young 20-something execs showed up to pass along the message to the studio to Mel Brooks: (in wimpy voice) “Sir, uh, I’m Mr. Pimplyface from corporate, and we just wanted to let you know you’re four pages behind.” You know what Mel Brooks did? I bet you know what he did?

SR: Probably threw them away.

MW: He tore them out of the book and told the guy, “Get off my set!” Then we weren’t behind anymore, so we improv’d it.

SR: What was that like for you, taking this thing you developed as a child more as a defense mechanism and finding that you were actually making a living off of it?

MW: It’s been quite an adventure. I feel very, very fortunate. I just don’t know what to think of it half the time. I’m very grateful I’ve had these opportunities. I’m putting out records, too. I’ve got some things getting ready to happen for the first time and I’m doing all the soundtracks for all the stuff I make. I’m working with some other guest artists, but all the beatboxers have been pestering me to please, please put something out and raise the standard and teach these young ones.

SR: You’re actually credited as one of the forerunners of beatboxing, which is really cool.

MW: Yeah, they say I’m one of the founders, which is fine, but now I’m going to have to break the rules in an organized manner and make some people angry. Because they’re going to have to figure it out, but that’s OK.

SR: Should comedy be safe, or should it have that edge on it that has the potential of offending, or…?

MW: People need to leave comedy alone and let it do its thing. Just like any Einstein experiment — if you observe the experiment, you change the experiment. If you comment on it, you change the outcome. One man’s ceiling is another man’s floor. As Claud Debussy said, “Any attempt to create art or beauty will always be regarded by someone as a personal attack.” Even if it offends no one, someone will take offense because they want to. Time flies when you’re having none. I’ve decided that art is art. But, on my show, we don’t do politics.

MW: We can be coy with it, you can play with it a little bit, but no. Here’s the thing. I’m a performing artist and I’m not comfortable with alienating 50 percent of my audience, just because somebody else wanted me to. If you want that, go watch Bill Mahar. The political folks are the political folks, let them do their thing. I have family members who are diametrically opposed who are now hating each other because of politics. So why would I want to offend the very people who need help, or a release (from comedy)?

SR: Speaking of comedy, a lot of people know you only from your films. How does your stand up routine differ? What should we expect?

MW: Um, well, you can forget about your rent for an hour.

SR: If you were at the Pearly Gates and were asked for one last bit, which would it be?

MW: Well, if St. Peter asked me to do Led Zeppelin again, I’d do it. There’s a video on YouTube from Norway. I don’t speak Norwegian, but I speak rock.

SR: I’ve seen your Jimi but never the Led Zeppelin one.

MW: The gentleman I was jamming with was a death metal guy. I learned how to play death metal in Finland. I’m going to put out one song that way.

SR: When does the album come out?

MW: I decided I’m going to release two different EPs immediately – one for hip hop, R&B and beat box, then the other for EDM dance music. Then I’ll put out a death metal album third. I’ve figured out how to make death metal music – the lead singer always sounds like he’s throwing up in a bucket.

See, no politics, right? Remember, my job is to help everyone forget about their rent. So that’s what we do. Break the rules in an organized manner. If you want normal, turn the channel.

Catch Michael Winslow at the live comedy show at the 219 Lounge Feb. 22 and 23. Doors open at 7 p.m. and the show begins at 8 p.m. Tickets are $20 in advance, $25 at the door. The show is hosted by Morgan Preston and features comedian Phillip Kopcyzynski.