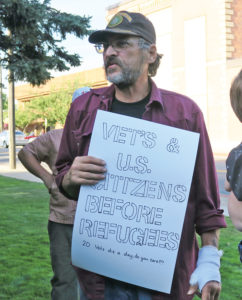 Police and fire department personnel had to turn people away at the door after people maxed out the building’s 100-plus capacity. The informational session, sponsored by the Bonner County Human Rights Task Force,  soon descended into disorder as Boise-based presenters Nick and Laura Armstrong faced frequent heckling, jeers and angry outbursts despite pleas for civility.

“We need to be reminded that there is no fear in love, and love drives out all hate,” Laura Armstrong said.

But attendees responded that refugees, particularly Islamic refugees, are a threat to communities, families and public safety.

The crowd frequently questioned why the Armstrongs came to Sandpoint in the first place. They explained that local community members requested the presentation. That didn’t satisfy many, who claimed that the meeting was part of a plot to bring refugees to Sandpoint. When the Armstrongs denied the accusation, audience members accused them of lying.

The Armstrongs work through their Boise church to manage the organization Glocal Community Partners, which helps connect recently-arrived refugees with community friends. They attempted to share data with the packed crowd indicating that while refugees receive public assistance after arrival, they are usually productive members of society within 7 years and are not significant sources of crime.

However, audience members replied that they didn’t want to spend a single tax dollar on refugee assistance and again called the Armstrongs liars. Some speculated that billionaire George Soros was funding them.

While the meeting included a question-and-answer session, organizers cut it short after outbursts continued unabated.

Originally intended to be a small-scale event, the refugee meeting blew up on Facebook as anti-refugee individuals organized a protest. Well over 100 turned out, almost all of them fiercely opposed to refugee resettlement and some carrying protest signs.

The refugee issue has consistently attracted large, angry crowds in North Idaho despite there being no plans to resettle them in the area. Bonner and Boundary counties both passed resolutions opposing refugee resettlement in late 2015. Sandpoint introduced a counter-resolution welcoming refugees into town but withdrew it in early 2016 after an intense backlash.