For Spokane singer-songwriter Brian Stai, his latest album, “Your Dreams,” was very much a dream come true. Not only did he record with renowned producer Doug Williams, best known for recording the Avett Brothers’ “Four Thieves Gone” album, but Stai also got to feature his dad on the album.

Originally from Iowa, Stai grew up in a musical household.

“My dad’s been in cover bands since he was 15,” said Stai. “He still is, actually. He plays all around in the area I grew up, in Iowa. So I grew up around live music, going to listen to live music a lot. My sister is also a very accomplished singer and theater actress.”

Stai began playing acoustic guitar when he was 12. He played guitar in the church choir, with his dad, and occasionally as part of an acoustic duo, but never considered it as anything more than a hobby.

“I wasn’t really into arts in high school. I was all about sports,” said Stai.

It wasn’t until the end of his college years that Stai began singing while playing and writing songs. More than any other band, the Avett Brothers inspired his forthcoming output.

“Something about their lyrics seems to have spoken to me,” he said. “They were a really big influence.”

For Stai, he has always been drawn to songs that emphasize thoughtful lyrics: “It could be a catchy song, but if the lyrics don’t speak to me, it’s hard to get on board,” he said. “Then there are songs where I don’t really know what the lyrics are. I guess the goal for me is to marry the two.”

Stai’s “Your Dreams” album, released last month, features a vintage Americana sound, but with introspective stories about love and life that would seem melancholy if they weren’t wrapped in an uplifting jacket.

“I think a lot of the album has been inspired by a post-college, transitioning to adulthood kind of feeling,” said Stai. “There’s something really sobering about your mid-20s. It was the beginning of my marriage, falling in love, but I don’t like to leave songs where there’s no hope. It shouldn’t be sad and vulnerable and end badly. So I try to end with some sort of light at the end of the tunnel.”

When it came time to record “Your Dreams,” Stai did lots of research. He came to the conclusion that instead of going with a jack-of-all-trades producer, or a local in his house, Stai would seek out a professional who produced bands he was inspired by.

“I love the Avett Brothers, especially their early stuff,” he said. “So I checked out who they recorded with when they started out as independent.”

“He was kind and generous,” said Stai. “A southern gentleman. He knew what he was talking about. We must’ve emailed back and forth 100 times between May and October.” 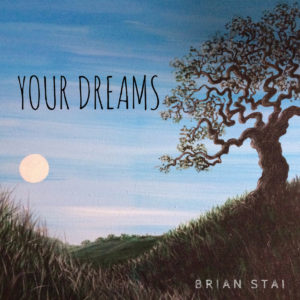 When it came time to lay down the tracks, Stai and his father flew down to North Carolina and spent three days in the studio with Williams, tracking all the songs in a whirlwind of effort.

“He’s really into vintage recording gear,” said Stai. “He uses mikes from the ‘30s and ‘40s, and tube mikes he got in the ‘80s for dirt cheap because no one knew how to fix them up. Some of the most iconic songs were recorded on that equipment.”

On the album, Stai’s father played all the bass tracks and also sang some harmonies and played a little lead guitar. The cover of “Your Dreams” also features a painting Stai’s mom did in the early ‘80s.

“With the cover art and my dad recorded on the album, it’s been a little bit of a family affair,” said Stai. “And it’s a record, which means it’s a memory that I’ll always have to listen to.”

Check out Brian Stai at the 219 Lounge Friday, Jan. 12, at 8 p.m. If you can’t make the show, you can listen and purchase “Your Dreams” at brianstai.bandcamp.com/album/your-dreams.