In a single two-hour sitting with Francis McNall, it’s easy to forget you’re living in 2018.

You’re caught up in the story of a 4-year-old driving a team of horses in the 1920s. Then he’s teaching in a classroom in the 1950s, or farming during World War II. He’s riding a wagon on Highway 95 before there was even gravel on it, buying his first microwave and breaking his hip while running from a sprinkler — at 80 years old. 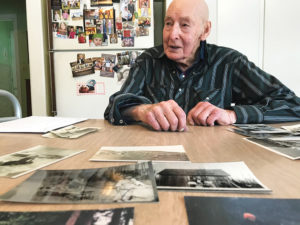 Francis McNall talks with the author about his long life in Bonner County. Photo by Lyndsie Kiebert.

And all this jumping back and forth through time isn’t because McNall is confused. He knows darn well it’s 2018. He can name all 33 of his great-grandchildren. He prepares his own food and counts out his own medications. He recalls what he did last week as well as he recalls his teen years.

It’s just that when you’re 100 years old, and someone asks you about the highlights of your life, it’s easy to jump around that century-long map of memories.

“I’ve had many highlights,” McNall said. “One after another.”

When Jan. 1, 2018, brought in the New Year, it also capped off McNall’s 100th year on the planet. He celebrated his birthday surrounded by close family — all 80 of them — on their family ranch on lower Grouse Creek.

When McNall and his family moved to North Idaho from Whitman County in 1922, they brought with them Sandpoint’s first shorthorn cattle. McNall, then 4 years old, went on to build the McNall shorthorn legacy into what it is today — McNall and Williams Shorthorns. To this day, the McNall name is all over the stalls at the Bonner County Fair each year.

Beyond raising cattle, McNall found his niche as a school teacher later in his life.

“That represents 23 years of good stuff,” McNall said while handing forth a photo of him and one of the classes he taught at Northside Elementary School, noting that his favorite part was “seeing those kids learn.” McNall taught fifth and sixth graders for more than two decades.

Now, McNall’s granddaughter, Tasha Albertson, teaches sixth grade in the same classroom at Northside that he retired from.

He said he was hired to become a teacher thanks to his experiences teaching vocational farm culture through 4-H. Because he had four years of college under his belt and the school was short of teachers, he found a passion that would lead to three generations of McNall teachers.

When McNall became an educator in 1957, a teacher’s salary was $2,700, he said. While some fellow teachers weren’t so happy with the money, McNall said he never complained.

“My arithmetic was pretty good, so I divided that by nine and when I got $300 a month I thought, ‘wow, that’s something,” McNall recalled with a laugh.

One highlight from his 100 years, McNall said, outweighs all the others.

“I’d say the biggest highlight is our family,” he said.

McNall and his wife Beverly, who passed away in April of last year after 69 years of marriage, had seven children together, who all have children and grandchildren of their own.

Of everything that has helped McNall live such a long life — from diet to staying active to saving whiskey exclusively to treat sore throats — his approach to life’s hardships has helped him most, he said.

“It is good to forgive. You should never hold a grudge. And it is good to look on the bright side. The worst thing you can do is brood,” he said. “And work.”

In the case of Francis McNall, it’s been a long life of work, and in turn, a long, fulfilled life.