The view from the bench

Being a coach taught me to dig deep while letting go

I had a lot of coaches growing up. Between volleyball, basketball, soccer and tennis, I listened to a lot of different advice between the ages of 8 and 18.

“Keep your elbow in.” “Communicate with your teammates.” “Stay on your toes.” “Follow your shot.” “Be aggressive.” “Lyndsie, please calm down before you turn the ball over … again.” 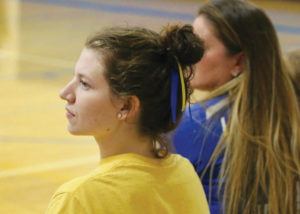 Coach Lyndsie most likely thinking, “What the hell are they doing out there?” Photo by Dan Earle.

I can’t say I was a stellar athlete, and it wasn’t for a lack of trying. I found I had a mind for the game, but my body had a mind of its own. By my senior year at Clark Fork High School, I’d earned the reputation of the player who played with heart, but not a lot of finesse.

Through all those coaches, and all that advice, one thing always stuck with me. One coach, George Thornton, always had something to teach me — whether I wanted to hear it or not. At one point, when I was around 15, I became so frustrated while talking to him that my eyes began to water.

“If I didn’t think you could improve I wouldn’t be giving you pointers,” he told me. “When I stop trying to help you, that means I’ve given up.”

I wasn’t sure how true it was, but it stuck with me nonetheless, and I never again let George’s harping get me down.

I went to college on academic scholarships, and following graduation I had a part-time job and absolutely nothing athletic in my life.

That’s when I applied to be the assistant volleyball coach at CFHS.

I was lucky enough to join a coaching staff that’d been working with that particular group of girls for several years, so the skill to win was there. Instilling the desire the win is where I like to think I came in.

Volleyball is just as mental of a game as it is physical. Being the strategic player I was, I tried to teach this to the team. The game starts as soon as you enter the same gym as your opponent. The team that is in sync, loud and disciplined in their warm-up is oftentimes the better team. Anyone can pass, set and hit a ball — what matters is where that ball goes. Be cheery, be excited, but also be ruthless. Find their weaknesses, then target them — then get incredibly excited when you win the point, whether the score is 1-0 in the first set or 15-13 in the fifth set. This is how I love to play volleyball, and it worked for us.

The team went nearly undefeated during regular season but for one loss, and then swept the district tournament. We went to state, and ended the year with two players — our captain, Brooke, and Ellie, my little sister — named to the All-State teams.

If you ask the girls, they’ll probably say I taught them to be obnoxiously loud on the court (which is true), but they might even say they learned a little more from their 21-year-old, greenhorn coach.

However, all I can really be sure of is what they taught me. 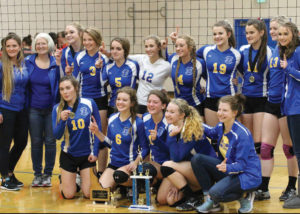 The Clark Fork varsity volleyball team after their sweep of the 2017 North Star League district championship. Photo by Dan Earle.

As it turns out, you can’t make someone want something — they have to want it themselves.

Yelling at someone to focus before they serve the ball does not help them focus. (This one’s for you, Cindy).

And finally, every single player needs something different. As a player, I focused on myself, and I trusted those around me to do their job. As a coach, I got to decide what everyone’s job was, and how best to convince them to do it the way I knew they could. Some players need encouragement. Some need a challenge. Others just want you to leave them alone.

It’s the same with people in our everyday lives, and yet somehow, when you’re seeing everything from the bench of a high school volleyball game it becomes a whole lot clearer.

I plan to keep coaching, whether I live here or anywhere else. I’ve been volunteering with both the girls and boys junior high basketball teams in Clark Fork as of late. Let me tell you: I thought teenage girls could be stubborn, but 12-year-old boys are on a new level.

But just the other day, as I ran a shooting drill with half the boys team and Coach George worked with the other half, I felt a part of some weird, Clark-Fork-sports circle of life.

I kept telling one boy, who is new to basketball, that he needed to box out. Then I was telling him to set his feet before he shot. Then I was harping on him about who knows what else when he looked at me with a discouraged expression.

“If I didn’t think you could improve I wouldn’t be giving you pointers. When I stop trying to help you, that means I’ve given up,” I told him.