Write behind the mic

Sandpoint has long been home to lively community open mics, the most recent of which is the Pop-Up Open Mic Series organized by the Sandpoint Literary Collective. 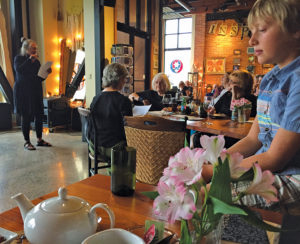 The SLC open mic happens every two or three months, this month coming to the Pend d’Oreille Winery on Wednesday, Oct. 30 at 6 p.m. The event is free to attend, but wine and food will be available for purchase. Attendees are encouraged to share Halloween-themed poems and stories.

In true “pop-up” fashion, Holbert said the open mic is meant to be mobile.

“We are happy to pop up in locations other than Pend d’Oreille Winery,” she said, noting that while the winery is the event’s “home,” SLC has hosted pop-up open mics elsewhere. “We just need to be invited.”

“I am drawn to these events because I love hearing local artists read their prose and poetry or perform original songs,” she said. “Plus, it gives me an opportunity to do the same with new material.”

Aguirre is a local writer and musician known to read original poems and perform on the banjo, guitar or ukulele at the pop-up events. She said she’s seen the power of open mics in how they’ve helped her daughter — who began attending such events at age 12 — develop “confidence and poise.”

“I believe that any venue that supports local artists is good for the community. It brings us together in a situation where there is mutual respect and consideration,” Aguirre said. “It is a live event for the community where people can share their experience, strength and hope with each other. Beats the heck out of watching television.”