The Death of Dick Long: A quirky dramady just right for Halloween

All right, who wants to get weird? It is the week before Halloween, after all.

The Panida Theater is screening one of those movies that lives somewhere between drama and comedy — a quirky no-holds-barred indie film called The Death of Dick Long. 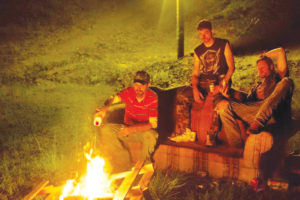 A still from The Death of Dick Long. Courtesy A24.

Brought to you by Dan Kwan, one of the inventive weirdos who made Swiss Army Man, and A24 studio, which has released such cult favorites as Lady Bird, The Witch, The Lobster, Ex Machina and others, Dick Long is a film about Dick. And Dick is dead. He died last night after band practice and his bandmates, Zeke and Earl (played by Michael Abbot, Jr. and Andre Hyland), don’t want anyone finding out how.

Set in small-town Alabama and filled with strange humor and unexpected turns, Dick Long has racked up some generous reviews of late, including a 76% on the Tomatometer from the notoriously picky rottentomatoes.com.

“You can feel your brain melting away as you watch it, and that’s not always a bad sensation,” wrote New York Magazine/Vulture film critic Bilge Ebiri.

Indeed, the film deliberately takes the viewer on an off-road excursion, filling its world with actors who play the poor-dumb-redneck schtick just right. For fans of studio A24’s previous work, Dick Long will certainly be right up your alley to count down the days until All Hallow’s Eve.

It’s rated-R for pervasive language, disturbing sexual material and brief drug use (sounds about right for a small town in Alabama).

To view the trailer, simply type in The Death of Dick Long on YouTube and take a deep breath. However, some recommend going into the film completely fresh, without having any preconceived notions. You do you, readers.