A feeling and a sound

Celtic interpretations of Christmas tunes have become a staple of holiday season playlists, but rarely are they performed with the sheer talent, pedigree and affinity of Affinití, the trio of violin, soprano and harp artists Mary McCague, Emer Barry and Teresa O’Donnell. 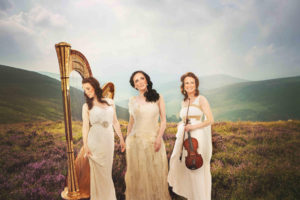 All award-winning and classically trained at prestigious institutions including the Royal Irish Academy, Trinity College Dublin, University College Dublin and the English National Opera in London, the members of Affinití bring their world-class repertoire and style to the Panida Theater, kicking off the group’s fifth U.S. Christmas tour Tuesday, Dec. 10.

The show, titled “A Celtic Christmas,” brings with it a full slate of favorite Christmas songs, including Affinití’s rendition of “O’ Holy Night” — which topped the Irish download charts during Christmas 2014 and has drawn more than 1 million views on YouTube — as well as Irish standards such as “Danny Boy.” No less than Howard Crosby, the nephew of legendary singer and former Spokane resident Bing Crosby, will join Affinití on stage, including for a duet of “White Christmas,” made iconic by his late-uncle.

In a phone interview from Affinití’s homebase in Ireland, McCague told the Reader that the trio has toured the States with Christmas concerts since 2014 — an idea spurred by Crosby.

According to McCague, Affinití connected with Crosby through a mutual friend when they were both performing at the National Concert Hall in Dublin. Crosby happened to hear their performance from offstage. Afterward, he approached the group, expressed how much he’d enjoyed the show and noted that they even had a CD track in common.

“By the end of the evening he was saying he was going to take us on tour in America,” McCague said.

Soon after, Affinití was on a plane to Texas, continuing to Washington, New York, Oregon, Chicago and Boston.

As Affinití states on its website, this debut launched an “‘affinity’ with the American audience” that now brings it to Sandpoint for the first time.

Asked why Celtic music resonates so much during the holidays, McCague said “it’s to do with storytelling. The Irish are renowned for their storytelling.”

“I think as well with people they have such an affinity with Ireland — especially in America, there was such a diaspora,” she said, adding that the group is met with warmth by audiences across the country who are eager to talk of their Irish ancestors and their former homes on the Emerald Isle.

“It’s a feeling and a sound,” McCague said of the attraction of Celtic music. “[There’s a] timelessness, particularly in Christmas time, when people are thinking of home.”

The trio draws its name from a feeling, as well, playing on the often-referred to “affinity,” which McCague said is what has kept them together for nearly 10 years.

“We find ourselves saying [we play together] on account of our affinity for each other, so why don’t we call ourselves Affinití?”

The twist, of course, is the “i” at the end, featuring the Gaelic long accent — a nod to the deep Irish roots that infuse their music. The other significance is more of an inside joke, McCague said, referring to the three group members.

The Panida show is family friendly, with children welcome, and will play out “in very much a concert format,” McCague said, with harp violin and soprano on stage at all times.

“It’s all storytelling and song,” she added. “It’s not a big fancy production; it’s a feel-good concert for the holiday season.”