A handful of Idaho lawmakers, joined by Lt. Gov. Janice McGeachin (who is challenging fellow Republican Gov. Brad Little for his job in November), gathered Sept. 15 on the Statehouse steps in Boise to decry COVID-19 vaccine mandates, whether they come from the federal government or private business.

As the spread of COVID-19 has ramped up in recent weeks on a wave of the highly contagious Delta variant of the virus, numerous businesses — including hospitals — have begun mandating vaccination for employees even as President Joe Biden recently approved of nationwide vaccine requirements for large employers.

“The Idaho Legislature must stand up to this federal overreach and exercise its 10th Amendment jurisdiction under the Constitution,” Rep. Heather Scott, R-Blanchard, wrote in a Sept. 14 constituent newsletter. “Time is running out. So many citizens are being pushed into a corner, coerced into making critical short- and long-term health decisions with wildly conflicting information while simultaneously facing imminent job loss. The mandates are having a broad ripple effect into other parts of society with many negative consequences.” 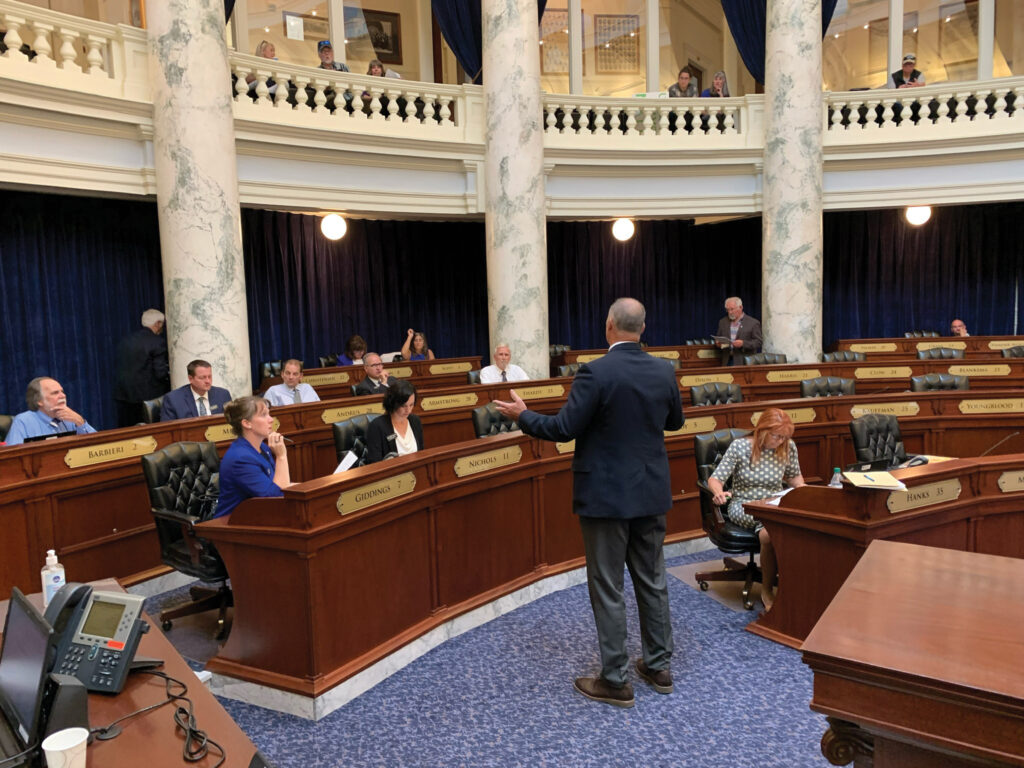 A small group of Republican legislators gathered on the House floor Sept. 15, 2021, after they failed to achieve a quorum of legislators. (Clark Corbin/Idaho Capital Sun)

Scott was among the legislators and others who spoke to a crowd of between 150 and 200 supporters at the Capitol on Sept. 15, joined by a number of similarly hard-right conservatives including Rep. Priscilla Giddings, R-White Bird, who is running for lieutenant governor, and fellow North Idaho Reps. Vito Barbieri, R-Dalton Gardens; Mike Kingsley, R-Lewiston; Ron Mendive, R-Coeur d’Alene; and Tony Wisniewski, R-Post Falls.

The group had planned to bring a quorum of 36 members to the House floor to press for legislation barring any and all vaccine requirements — an effort that Scott described in another constituent newsletter Sept. 11 as “a bill to protect individuals from medical tyranny.”

Far from a quorum, the impromptu session has no legislative authority, as with a similar ersatz session convened by many of the same legislators last year to oppose Little’s then-lapsed COVID-19 restrictions. The House did not officially adjourn for the 2021 regular session and technically remains in recess, but can only be called back by the authority of House Speaker Scott Bedke, R-Oakley (who along with Little and Senate Pro Tem Chuck Winder, R-Boise, have also vowed to challenge Biden’s vaccine mandate in court).

According to Idaho Press reporters Ryan Suppe and Capitol correspondent Betsy Z. Russell, the legislators moved to the House floor in the afternoon, where they were joined by a few others including Rep. Sage Dixon, R-Ponderay, who said that he was there in “the role of an observer.” Dixon and Sen. Steve Vick, R-Dalton Gardens, are co-chairs of the Committee on Federalism, which he told the Idaho Press is planning to meet Tuesday, Sept. 28 to work on similar issues of “federal overreach.”

With a total of 15 House Republicans in attendance, legislators shared a number of ideas for proposed laws against vaccine mandates, including one that would make required vaccination “assault” under Idaho Code.

Scott suggested amending state labor law to bar any type of medical intervention, precaution or procedure from being a condition of employment — with violations punishable as a misdemeanor. That would include hospital employment.

“It should all be a personal choice,” she said, according to the Idaho Press.

Giddings floated a similar proposal, including protection of medical records such as vaccine status.

The Idaho Association of Commerce and Industry, the most powerful business lobby in the state, condemned the informal Statehouse gathering Sept. 15, calling it “sad,” “an illegitimate session” and “an attention-seeking sham of an exercise” fronted by “a small minority of state representatives” who would seek to “put big government in charge of decisions businesses should be making themselves.”

“This gathering is not only a disturbing defiance of House Resolution 004, which states that only the speaker of the House can call the House back into order, but also a shining example of these few House members’ deliberate disrespect for the rule of law, the founding principles of Idaho, and its citizens,” stated IACI President Alex LaBeau.

“While the obsession of this small minority of legislators to override our status as a right-to-work state is troubling, to say the least, we stand with the majority of Idahoans firm in our belief that businesses can and should make decisions for the health and productivity of their employees on their own,” he added.

Lawmakers in attendance at the Sept. 15 gathering said they plan to regroup at the Capitol on Thursday, Sept. 16 at 9 a.m. (Mountain) in hopes that more House members will join them.