A piece of Sandpoint — real Sandpoint — died this week when Dann Hall passed away on Nov. 28. The son of Ross and Hazel Hall, the former a famed photographer and the latter a beloved pillar of the community, Dann was as local as you could get in this ever-changing town. His smiling face was always a welcome addition to every trip downtown.

I first met Dann when I was a teenager, working at Hidden Lakes Golf Resort. Dann was always one of my favorite members at the golf course. He always had a big smile on his face and treated everyone as a friend. While some members didn’t interact much with the staff, Dann was always one to stop and have a conversation with everyone — he treated everyone equally, from the maintenance crew to the cart kids to the head pro. 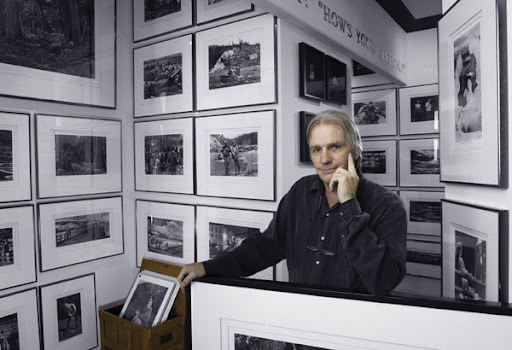 Dann always called me “Benny-o” back in those days and I called him “Dann-o.” This little back-and-forth persisted until the present day.

Later, as I began to get into photography as a possible career, Dann always went out of his way to share any insights into the craft his father taught him. When I wanted to set up a darkroom to learn how to make my own prints, Dann explained some of the tricks he’s perfected to help get the most out of a negative.

The Hallans Gallery on First Avenue has been the epicenter of Sandpoint history for many decades, housing the prolific collection of Ross Hall’s negatives and prints, which documented the town’s history. Dann served as steward of his father’s collection, understanding the importance of the work to our town’s history. It is because of Dann’s family that we have so many images with which to chronicle the early 20th century in North Idaho.

After I brought the Reader back to print in 2015, Dann’s was one of the first businesses to advertise in the relaunched newspaper. Whenever we had a need to run an iconic Ross Hall print in the paper, Dann never charged us for the service — always offering it free without any reservations.

During the pandemic, Dann moved his office up to the Farmin Building, where the Reader office is also located. It was a pleasure seeing him more often, sharing stories of golf or photography or life in general as we passed one another in the hallway. Recently, Dann purchased a huge new printer that could facilitate printing very large photographs from his father’s negatives. One of the last conversations I had with him was how happy he was to play with the new toy.

Dann cared deeply for this community. He was a force for good who made this town a better place every day. He loved his wife Paula immensely, and it was heartbreaking when we lost her in 2019.

I remember a night some years back, before Paula passed away, when we were all gathered around a bonfire while camping on the lake. My girlfriend Cadie and I played music around the fire, filling the night air with our songs. Dann and Paula sat across the fire in each others’ arms, smiling and laughing.

It was the perfect North Idaho summer night, made better by the company of one of Sandpoint’s native sons, who is now hopefully in the arms of his Paula again.

We’ll miss you, Dann. Thank you for making all of our lives fuller.