In 1998, University of Wyoming student Matthew Shephard was brutally murdered in Laramie, Wyo. — a murder that was denounced as a hate crime since Shephard identified as gay. He was robbed, pistol-whipped, tortured, tied to a fence and left to die — all because of his sexual orientation. 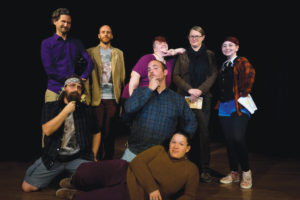 The cast of “The Laramie Project.” Courtesy photo.

Shortly after the murder and during the trial of perpetrators Aaron McKinney and Russell Henderson — both convicted and serving two consecutive life terms — the New York-based Tectonic Theater Co. began conducting interviews with citizens in Laramie about the murder. The interviews were compiled and written into a critically-acclaimed play, The Laramie Project, first produced in 2000 by Moisés Kaufman.

Dorothy Prophet, of Cade Prophet Memorial Productions in Sandpoint, chose The Laramie Project to produce at The Heartwood Center on Friday, Oct. 25 and Saturday, Oct. 26 at 7 p.m., with a matinee showing on Sunday, Oct. 27 at 2 p.m. Tickets are $15 for general admission and $10 for seniors and students.

Prophet knows the heartbreak of losing a son. In 2017, her 25-year-old son Cade was killed after falling off loose rocks on a ledge overlooking the Palouse Falls in Washington. Following the tragedy, Prophet established Cade Prophet Memorial Productions, which produces two plays each year to honor the life of her son while promoting the arts and supporting local nonprofits.

It was a connection to a specific line she read in The Laramie Project that convinced Prophet it was the next show to produce.

“There’s this speech given by Dennis Shephard that talks about the death of his son, and it struck me,” she said. “He talks about how his son was left tied to a fence overnight in the wilderness, but he wasn’t alone. He had his lifetime friends with him; the stars and wind and nature. So he wasn’t really alone. For me, that made me feel good, because it took them 24 hours to find Cade, and even though I knew he was gone when he hit the rocks, those 24 hours he was there — I’d like to believe he was with his friends, too.”

The Laramie Project is an example of verbatim theater, which draws from the hundreds of interviews and diary entries conducted by the theater company in Laramie. It’s only the third time this play has been produced in the state of Idaho.

“It’s a snapshot of what Laramie was like at the time and the various beliefs and views of the people,” Prophet said. “It’s really interesting to me, because I see it very much as a reflection of what Sandpoint could be like. There are those people who are accepting and embrace alternate lifestyles, there are those who tolerate it and then there are those who are adamantly against that.”

Prophet said a range of viewpoints are expressed in the play. Since each of the eight actors play a minimum of eight roles, Prophet said some found it challenging when their lines preach hate or intolerance.

The cast for The Laramie Project features a who’s who of Sandpoint theatrical players, including Michael Bigley, Becky Campbell, Mike Clarke, Nicole Burrato, Bronwyn Toth, Bailey Hanson, Cory Repass and Eric Fulgenzi. The play will be directed by Prophet, with special sponsorship help by Chris and Kathy Chambers and Scott and Susan Bourn.

Prophet hopes that the play reaches people sitting in the “middle ground.”

“I’m hoping we can persuade some of them that acceptance is more important than tolerance,” she said. “It’s about acceptance. Maybe we can help them get there.”

Prophet will donate half of the show’s proceeds to the Sandpoint chapter of PFLAG, a support organization for Parents and Friends of Lesbians and Gays. She plans to earmark the other half to fund the spring stage offering from Cade Prophet Memorial Productions, which is to be announced.

“We do two shows each year — one in May on the anniversary of Cade’s death and another in October,” Prophet said. “The one in October will always be a little scary or maybe a little real. This one is both real and scary.”