Angelina Henry and Marcy Timblin, co-owners of Sandpoint’s forthcoming Uptown Bagel Co., just want their customers to be happy. The rest will all sort itself out. 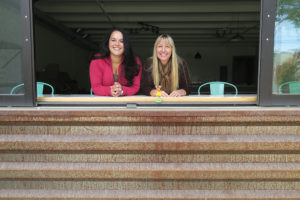 Angelina Henry, left, and Marcy Timblin, right, smile out their front window at the new location for Uptown Bagel Co. in Sandpoint. Photo by Ben Olson.

“We want that ‘Cheers’ experience where everybody knows your name,” said Henry, who co-founded the new Sandpoint business with Timblin. “We want to be friends with our community, and we want them to leave with a smile on their face.”

Armed with tasty New York bagels, a cheery customer service mantra and a basket full of ‘80s music, Henry and Timblin aim to open their bagel shop in Sandpoint the first half of October.

“Marcy came to me with the idea in January, and we’ve been working on it ever since,” said Henry.

Henry said the idea came to Timblin after she visited her daughter in Moscow.

“They have Moscow Bagel Co. down there, and every time they went to visit, they’d always stop by the bagel shop and have a bagel,” she said. “Then we thought, ‘There’s no bagel shop in Sandpoint.’ And I don’t know anyone who doesn’t love a bagel sandwich.”

Henry and Timblin – both Sandpoint locals – chose the location at 301 Cedar, which is located inside the Old Belwood Building (the shop is accessed from Third Ave. to the south of Fat Pig Restaurant).

In all, there will be over a dozen signature sandwiches on the menu and a plethora of bagel varieties to choose from. Henry and Timblin even plan to make their own cream cheese in-house.

“It’s not going to be cream cheese like Philadelphia,” said Henry. “It’s called frischkase, which is German for ‘cream cheese.’ It’s softer than your standard cream cheese, more spreadable, and you can mix other ingredients in it.”

Along with delicious sandwiches and bagel varieties, Henry said an equally important tenet of their business is to create happiness.

“It’s going to be a classier place with a funky ‘80s vibe,” said Henry. “We really want to have fun, and we want our customers to feel like they’ve made a new friend.”

While the goal to spread happiness is built into their business model, the pair also intend to put their money where their mouths are and donate a percentage from each sandwich to a variety of local charities.

“We’re really passionate about mental health,” said Henry. “That’s why we wanted to give back like this. Our mission statement pretty much sums it up: ‘To serve deliciously addictive food and happiness to every customer by 2 p.m. every day.’”

Follow Uptown Bagel Co. on Facebook to find out their exact opening date, which is scheduled for the first half of October.