The geoduck (gooey-duck) isn’t even a duck, it’s a clam called a duck. That’s not even the weirdest part of its name. Its name is derived from a Lushootseed (language of the Salish Native American tribes) word for genitals, probably because of its X-rated appearance. 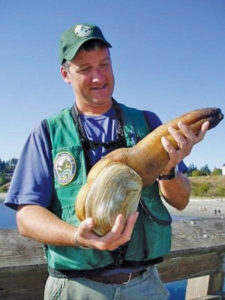 The geoduck is, in fact, a clam. A big freakin’ clam, getting up to almost 8 inches, but it has an extendable siphon that can reach up to 3.3 feet. Despite their immense size, they start the first few years of their lives about the size of a dime or a quarter. This odd alien ocean dweller is a favorite on cooking competitions, where most competitors have no idea what on Earth it is or why they have to cook with it.

Not only do they have weird names and appearances, they’re also one of the longest-lived organisms in the world (once you disqualify things like trees or super-cloning Aspen and fungi.). People have found geoducks that have lived for almost 170 years. I’m not sure what sort of war crimes you perpetrate in a former life to be reincarnated as a giant alien slug-beast cursed to live for almost two centuries, but I’m glad my former self didn’t partake in such shenanigans!

Another weird trait geoducks possess that should’ve been included in an article a couple of weeks ago is something called broadcast spawning. Geoducks don’t mate. Instead, the female expels tens of thousands of eggs into the ocean currents and just hopes that males are downstream getting all worked up and fertilizing them in their path. The number of eggs a single geoduck female can release in her lifetime numbers in the billions. The number of those eggs that may mature into another geoduck is a fraction of a fraction of that. They may live for a long time, but between commercial fishing, the introduction of parasites and the natural ebb and flow of the natural world, these poor dudes have an extremely high mortality rate.

You might think this alien clam has nothing to do with you. In most cases, you’d probably be right, but did you know the geoduck is kind of your neighbor? They’re native to the Pacific Northwest’s coastline, and they’re actually commercially farmed in Puget Sound. That’s right: between timber, apples and potatoes, the Northwest has another specialty crop that’s taking the world by storm: giant freaky clams!

Geoducks spend their lives burrowed beneath the mud, sand or silt. They spend their entire life (all 1.5 centuries of it) in one spot, using that creepy siphon neck to draw in seawater, plankton and minerals. What’s super gross is they expel their waste the same way they draw in their food. If humans did that… Ah, let’s just not even go there.

Not only does the water surrounding the geoduck’s siphon effect the quality of its meat, but so too does the quality of the sand or dirt alter the taste and texture. Geoducks that have grown in fine substrate and sand tends to be more tender, while geoducks that spent their lives in mud are tougher and more earthy. You know what they say: location, location, location!

Despite what you might think at first glance, there’s a tremendous amount of stuff you can do to geoduck in the kitchen. Dice it, saute it, serve it raw. The flesh is crunchy and savory, so desserts aren’t your go-to with this mollusk, but don’t let me stop you from being adventurous. You went as far as overnighting one of these goofy things, who am I to hold you back from your culinary dreams?

Geoducks are extremely popular in Asian cuisine. Korea probably has the most varied uses for these clams, serving them raw, putting them in soups, sauteing them, frying them, you name it. For sashimi aficionados, Geoduck sashimi is called “mirugai”. Though I can’t vouch for this information personally, mirugai has been described as “sweet, salty, somewhat like oyster, tangy like sea cucumber and chewy.”

The next time you see this oddball show up on a cooking show, now you can smile to yourself: You probably know more about this weird thing than the people that have to cook with it do.