The concept of home imbues much of Honeysuckle’s music. All the more appropriate, then, that their most recent tour is a homecoming in its own right. 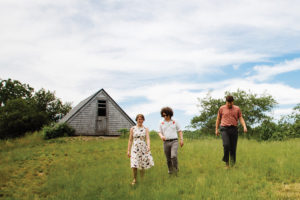 Singer-songwriter and Sandpoint native Holly McGarry, along with bandmates Chris Bloniarz and Ben Burns, returns next week as her band, Honeysuckle, continues its first cross-country tour. The trio has planned a series of shows across two weeks in North Idaho and East Washington, but Sandpoint residents can expect a special connection to the music. After all, McGarry still draws on her memories of home to shade her songwriting.

“There’s a lot of loneliness in the material, but there are some optimistic tunes there, too,” McGarry said.

McGarry is well-known to Sandpoint audiences for her solo work, which began while she was still a local student and advanced as she completed school at Berklee College of Music. Since then, she and her bandmates have built Honeysuckle a following in the Boston area, earning glowing write-ups in the local media.

According to McGarry, Honeysuckle aims for a sound in the progressive folk tradition, but with plenty of modern flourishes. Audiences can expect the instrumentation and vocal harmonies that are the bread and butter of many a folk outfit. Then there are the more unusual touches like Bloniarz’ mandolin peddleboard, which adds fascinating new textures to a very familiar instrument.

“We very much have that modern edge, I guess,” McGarry said with a laugh.

McGarry, Bloniarz and Burns have been hard at work on their next album, “Catacomb,” which is due for release on Oct. 5. It is a collaborative project in every sense of the word, with the trio sharing duties on both the writing and recording ends of the process. All three members have contributed songs to the album, including Bloniarz’ song “Watershed” and Burns’ single “Beautiful Pain.” They also share the microphone on vocals.

“The fun thing about this album is that it’s a little more even (between all three of us,)” McGarry said.

As far as musical themes are concerned, McGarry said they tried to strike a balance between the melancholy and the merry.

“A lot of (the songs) focus on family and home, which Ben and I have drawn inspiration from previously,” McGarry said.

It wouldn’t be a proper homecoming without the chance to share her latest work, and McGarry and company have plenty of opportunities planned across a two-week period. Honeysuckle will be supported by several local favorites throughout those shows. For McGarry, it really will feel like coming home.

Honeysuckle will play the 219 Lounge on August 31 at 9 p.m., the Bartlett in Spokane (with Little Wolf) on Sept. 1, Evans Brothers Coffee (with Harold’s IGA) on Sept. 2 at 7:30 p.m., FallFest at Schweitzer Mountain Resort on Sept. 3, and The Pearl Theatre in Bonners Ferry on Sept. 8. For more info, check out www.honeysuckleband.com