Raised on a heavy diet of G-rated Christian tunes, James Bauscher knew there was “something more out there.” His hunch was confirmed when in fifth grade he heard The Beatles for the first time. 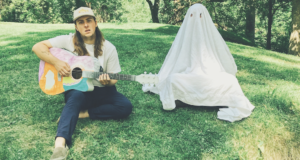 “I thought, ‘Oh my god. This is what music is supposed to sound like,’” he said.

Inspired by that enlightenment to become a musician and drawn to the musical movement to “create a modern sound that carries influence from older times,” Bauscher said that while writing songs he often found himself listening to bands like The Beatles, Rolling Stones and Doors for inspiration. Not to “copy and paste,” as he put it, but to gather guitar tones and daring vocal arrangements.

“I wanted to take the soul behind it and make it something different,” he said.

The result was 250 half-written songs on Bauscher’s computer. After recently teaming up with drummer Josiah Sherman to narrow them down to 15, he said 12 tracks ultimately “just picked and finished themselves.”

The same essentially happened with the rest of his band, Spokane-based Uh Oh and the Oh Wells. When Bauscher posted on a Spokane musicians’ Facebook page seeking guitarists and bassists, the band’s three remaining pieces — Zach Jordan, Alex Ortega and Sandpoint native Marshall Piatt — signed on.

That was August 2019. By October, Uh Oh and the Oh Wells dropped a self-titled album so complete in its sound that it’s shocking to find out the band only just formed. What that sound is, exactly, is harder to pin down.

In the band’s own words, drawn from its Spotify bio, Uh Oh and the Oh Wells creates music that sounds like “you took classic rock, modern indie pop and aspects of the psychedelic movement of the ’60s, threw it in a blender and plugged your headphones into it.” That’s an apt description.

The band’s debut self-titled album, available on Spotify, is a journey through genres both familiar and vaguely recognizable. Lead track “Outta Luck” has a Black Keys groove and shows off Bauscher’s vocal range. “Brain Dead” has a confident rock sound so rarely found on freshman albums. By track 12, the headphones-in-a-blender analogy comes through with finesse.

As for the unique name behind that unique sound, Bauscher said it arose from a time in his life where he kept making “stupid decisions.”

“From those decisions, something good would happen,” he said. “It’s about taking something bad that’s happened, and [knowing that] something positive will come out of it, even if in the moment it seems like a crappy time. [Uh Oh and the Oh Wells] means accepting what life is going to throw at you.”