I’ve never been a Halloween humbug, so I wasn’t about to miss out on the fun of writing an article on one of my favorite holidays — but where would I start? The Reader staff had my back, and came up with a bunch of suggested topics for me to research and share with the world.

Buckle up, this is going to be a lot of info to cram into 900 words. 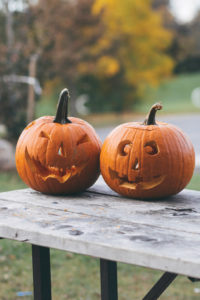 Ben Olson: The science behind vampires, werewolves, ghosts and other paranormal things.

Vampire lore is believed to have originated sometime in the 17th or 18th centuries, hailing mostly from eastern Europe. Stories such as Bram Stoker’s Dracula were largely inspired by a mix of local folklore and history, primarily Vlad the Impaler. Vampirism may have actually been inspired by or misinterpreted from a host of diseases called porphyria, which sometimes affects the skin to create photosensitivity, which is sensitivity to light. Porphyria can be treated (but not cured) with regular blood transfusions, which could have caused the blood-drinking myths.

Lycanthropy, or the affliction of a werewolf, is a story far older than any vampire lore, dating as far back as the Epic of Gilgamesh from 2100 BCE. The root of the story seems to come from humans’ primal fear of wolves. Wolves are highly intelligent and perhaps the second-highest predator on the food chain, behind humans. Interestingly, the idea of the full moon making people turn into werewolves may have been an introduction by the medieval Catholic Church to stem paganism. The moon was revered in many pagan rituals, and if the medieval Church did one thing well, it was abolishing things with systemic fear.

The science behind ghosts and the paranormal is much harder to pin down. Fear of the dark and unknown is hardwired into our brains from well before the Stone Age, while belief in a life beyond death is the core tenet of most religions.You’ve probably seen plenty of ghost hunter shows, in which they use some sort of electronic device to “track” the ghosts in an area. This is an EMF reader that tracks electromagnetic fields. Before you buy one to look for ghosts in your attic, you should know these things are primarily designed for locating wiring or other sources of electromagnetic fields in your home, so you don’t accidentally electrocute yourself during a remodel.

Skeletons have played very different cultural roles throughout history, depending on where you look. In Western cultures, skeletons are harbingers of doom. This originates from the idea that the only time you see a skeleton is after someone has died. During the Middle Ages criminals would be stuck in gibbets — hanging metal cages — that would serve as a warning to  passersby: Don’t do what this guy did, or you’ll have a gibbet waiting for you. Needless to say, these weren’t cleaned very often, and over time a skeleton was all that would remain. The fear of mummies is a little more intricate. Caring for and preserving the dead was culturally important to the ancient Egyptians. Due to Napoleon Bonaparte’s excavations in Egypt in 1788, ancient Egyptian culture became couture in the late 1700s, the same time America was forming as an independent country in the wake of the Revolutionary War. The Egyptians left warnings in the form of written curses in the tombs of those they buried to deter grave robbing — warnings that would become the center of our fear of mummies. Besides, what’s scarier than an undead monstrosity?

Zach Hagadone: The science behind Halloween candy. How’s it made? What does it do to you when you eat it? How long can it last?

There are a lot of different types of candy out there, so I’ll just have to cover the core here: high-fructose corn syrup. The most widely available artificial sweetener in the United States is in almost everything for two reasons: it’s cheap and addictive. HFCS is produced by milling corn, crushing it into corn-starch powder and adding water, as well as an enzyme from bacteria that breaks down the starch into glucose. After that, another enzyme from a fungus is added to create the perfect 55-45 mix of glucose and sucrose.

HFCS has been linked to obesity and diabetes in the US for multiple reasons. Manufacturers put it into just about every food, which adds unnecessary calories to our everyday diets. It’s extremely sweet and our brains are hardwired to seek calories, so we eat a lot of it.

Finally, because of its chemical composition, our bodies don’t have to break it down, making it easy to absorb directly into our bloodstream, and from there it’s consumed and converted into fat cells our body intends to use later. Since we don’t hunt and gather anymore, it just ends up expanding our waistlines.

As for how long candy lasts while still being safe to consume, that number ranges widely from type to type. Things like peanut butter cups can remain safe to eat for six to nine months, while dark chocolate can remain totally fine for up to two years. Most of the candy has a low moisture content with lots of sugar, similar to honey, which makes it difficult for bacteria and mold to thrive in.

Share some of these facts when you visit the dentist, just not while the drill is on. Trust me on this.