One of the most challenging roles in theater is performing in a one-person show, and even more difficult is portraying an iconic character and getting it right. I know this from personal experience. Miriam Robinson has taken up the challenge bringing Molly Ivins to life in Ron Ragone’s production of “Red Hot Patriot: The Kick-Ass Wit of Molly Ivins,” written in 2010 by twin journalist sisters Margaret and Allison Engel. 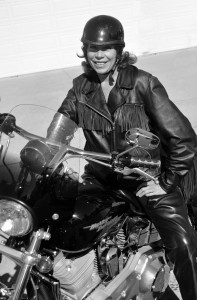 Molly Ivins was a proud Texan who loved exposing corrupt politicians through her journalistic talents. She believed everyone should be accountable, especially if you were an elected official or a journalist. It was Ivins who coined the nickname “Shrub” for President George W. Bush. She had more than a few things to say about Mr. Bush both when he was governor of Texas and President.

When I asked why he chose this play, Ragone replied, “My wife saw it at the Geffen Theater in L.A. and when she came home she told me I had to produce it for Sandpoint. So I am.”

He chose Robinson as the lead after seeing her performance in “The Counselor,” an original play by local playwright Teresa Pesce.

“There are also some similarities between the two,” he said. “Miriam is roughly the same age as Ms. Ivins and had a very similar relationship with her father. These experiences have made Miriam an even better fit for the role.”

As an audience member, I enjoyed the personal touch of having some of Ivin’s memories come to life through photos of poignant moments on the screen behind her. An explanation went along with each photo, and it was fun to see familiar faces to the American life and Ivins’ involvement with them.

The theme of father/daughter angst is apparent, and Ivins expounds on their relationship throughout the play. Being political opposites—she proclaimed she was a “liberal by choice”—created the most pronounced wall between the two stubborn Texans. In the end, the two never made amends, which haunted Ivins for the rest of her life.

The stage is set resembling a journalist’s office filled with file cabinets, a desk, the sound of a teletype machine and of course, the Texas state flag. Robinson is also dressed for the part and obviously comfortable in the role, wearing jeans, a denim shirt and cowboys boots.

“I don’t like playing Molly, I LOVE playing Molly,” Robinson said. “She had the courage to do things most women of her time wouldn’t do. She was courageous. She respected everyone even if you didn’t agree with her.  She was a hell of a woman.”

Although Robinson has the only speaking part, she is joined sporadically by Conrad Mearns who serves as the “Coffee Kid” in the play. He simply comes to the stage, rips off the teletype messages and lays them on the desk.There are no small roles in theater, and in fact, this mute role plays a major part in the surprise ending. You have to attend to see what I am talking about. Very clever.

In the same vein as “The Daily Show with Jon Stewart,” Ivins felt society learned through humor. While laughing at her witty repartee, we inadvertently learn something about ourselves and hopefully, get involved.

Molly Ivins was a vivacious character with an amazing wit, and it comes through loud and clear in this performance. Thank you Ron Ragone for producing and Miriam for bringing her to life. I recommend this performance as a great night out. Go to dinner and then the theater—you don’t want to miss it. Brava!

On a side note:  For me, this play reminded me of my friend Laura Bry and her passion to get others involved in local and national politics. She and Molly would have been great friends. When you see the play, and if you knew Laura, you will understand. Laura Bry was also “a hell of a woman.”

“Red Hot Patriot” opened last weekend, with performances continuing this weekend. Check it out from July 17-19, with showtimes starting 7:30 p.m. Friday and Saturday and a 3 p.m. matinee Sunday at the Panida Little Theater. Tickets cost $14.