Rare are the communities that are lucky enough to have a citizen like Steve Lockwood. He and his wife, Molly O’Reilly, seemed to be everywhere, always — involved to the hilt in all manner of issues, organizations, causes and campaigns. Together, they were a dream team of civic engagement, ever-ready to lend a hand, offer their input, extend their financial support and share their collective wisdom. 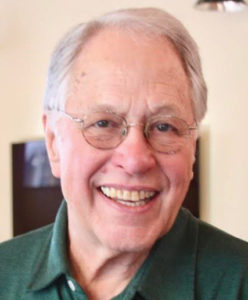 So it was with deep shock and grief that we heard of Steve’s passing Jan. 16 at his and Molly’s wintertime Arizona residence. Steve would have been 81 in February, but based on his zeal and vigor working on, thinking about and speaking for issues both big and small, you’d never guess he was in his eighth decade.

Like so many in the community who were fortunate enough to interact with him over the years, our first reaction to hearing the news at the Reader office was: “But we had so much more to learn from him.”

A North Idaho resident for 21 years, Steve enjoyed living in Bonner County along with his two adult sons and their families. All four of his grandkids were born here and graduated from Sandpoint High School.

Born and raised in Portland, Ore., Steve attended Reed College and AT&T technical and managerial schools. He enjoyed a long and successful career with the telecom company, working in human resources and as operations manager for Oregon.

That’s not how most people in Sandpoint knew him, though.

For us, Steve was a Lake Pend Oreille School Board member, a Sandpoint Planning and Zoning commissioner (also serving as chairman), Sandpoint City Council member and member of the Sandpoint Urban Renewal Agency. The last public office he sought was for a seat on the Bonner County Board of Commissioners in 2018, when he was 79.

Even that impressive curriculum vitae doesn’t accurately reflect Steve’s contributions to the Sandpoint community. As Sandpoint City Councilwoman and Greater Sandpoint Chamber of Commerce President Kate McAlister said in a tribute to Steve at the recent N.Idaho Women’s March, “Steve was the best of us. … He would have been in the front row.”

Beyond all the offices he held and the volunteer hours he donated, Steve’s real gift to his fellow citizens was his example. Through his energy, breadth of knowledge and experience, keen analytical sense and — most important — his humor, Steve showed us all what it really means to be a contributor to society: not a critic nor a snide commentator, not a gadfly nor a keyboard warrior, not a partisan ideologue nor a political grandstander.

Steve’s commitment to his adopted hometown was a living portrait of an engaged citizen; the kind of person so often alluded to as an ideal, but so infrequently met in real life.

Always constructive, always collaborative and always challenging others to meet him on the high road, we at the Reader will especially miss Steve’s occasional impromptu visits to the office, when he would drop by to share some interesting information about local goings on, pick our brains about something, or arrange for an upcoming letter to the editor or guest opinion.

Steve and Molly were among the first and most consistent supporters of the Reader, dating back to the old days when we were just a couple of 20-somethings with a few busted up desktop computers. Even then, he would stop in for a lively chat now again, and it both saddens and makes us glad to think back on the last time he came by, before the weather got bad, in early November for a spirited conversation about the city elections.

We’re grateful that that gets to be our final memory of him — his trademark smile lighting up as his legendary intellect went to work on “what it all means.”

As we mourn his absence from the fabric of this town, we also have faith that his passion rubbed off on more than a few people around here and that his example will spur others to take that high road to meaningfully engage with the people, places and issues that make this place as special as he worked to make it.