Modern 3-D art is a wild thing — once you understand the technical process, the only limit is your imagination.

With new video game systems and computer technology poised to redefine what is possible with 3-D graphics, creators are envisioning promising new horizons. Daniel Seward is among them and, with the recently-founded Vigilante Studios in Bonners Ferry, he aims to share that vision with a new generation of artists. 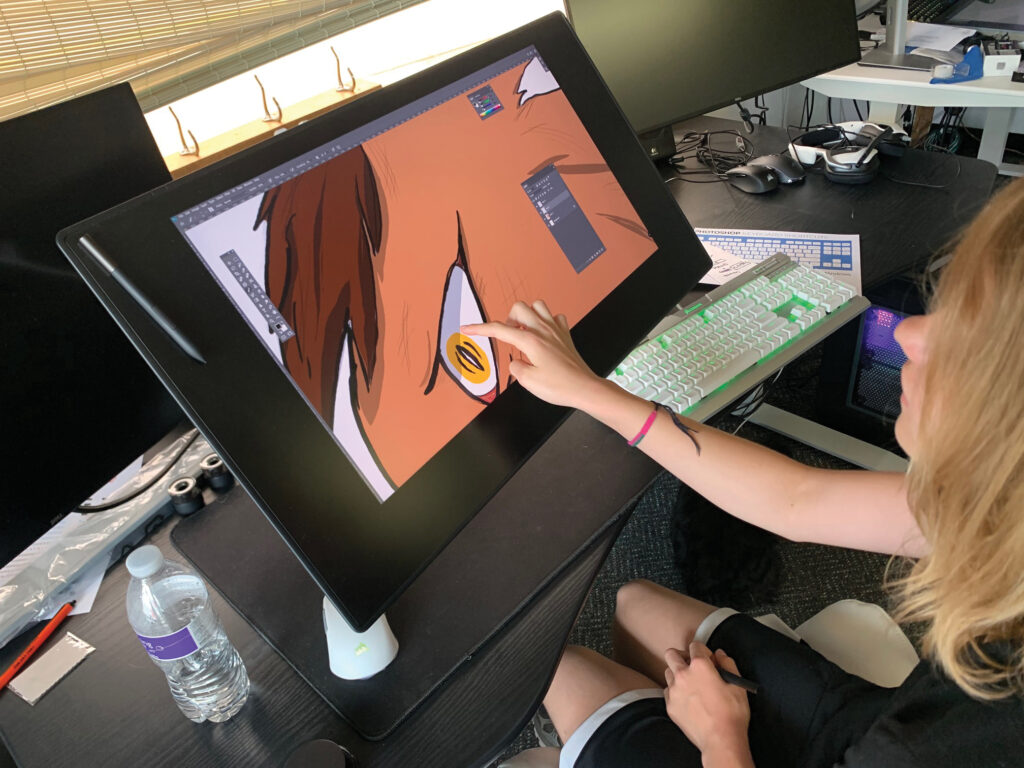 A Vigilante Studios designer at work on a project.

“Our machines and our technology are finally catching up with the concepts we can imagine,” Seward said.

That has big implications for digital entertainment of all kinds, from video games to the most popular movies and TV shows. It’s the perfect time to train up new artists to meet the demands that the new tech will create — or it would be, if it weren’t for COVID-19.

Seward founded Vigilate Studios almost a year ago with exactly that vision, focused on a dual mission to train students on the ins and outs of graphics rendering, then turn those skills to practical use by offering creative development services for a range of clients.

A North Idaho native who moved to San Francisco for education and work during the “dot-com boom,” Seward acquired his share of contacts and opportunities for contract work during his California days. When wildfires there prompted his return to North Idaho, Seward created Vigilante Studios in Bonners Ferry in cooperation with fellow Sandpoint native Uriah DuPerault and other industry veterans. Then COVID-19 and quarantines hit months later and, suddenly, bringing students in a small studio for computer graphics training didn’t seem like the best idea.

“Once the COVID thing clears up I think we’re going to take off pretty well,” Seward said.

That’s a reasonable prognostication. After all, it’s never been a more exciting time for the digital arts. Video games are more popular than ever, with Microsoft and Sony releasing the latest generation of their Xbox and Playstation hardware this month. New video game consoles mean more horsepower for the graphical bells and whistles that developers could only dream of a decade ago. 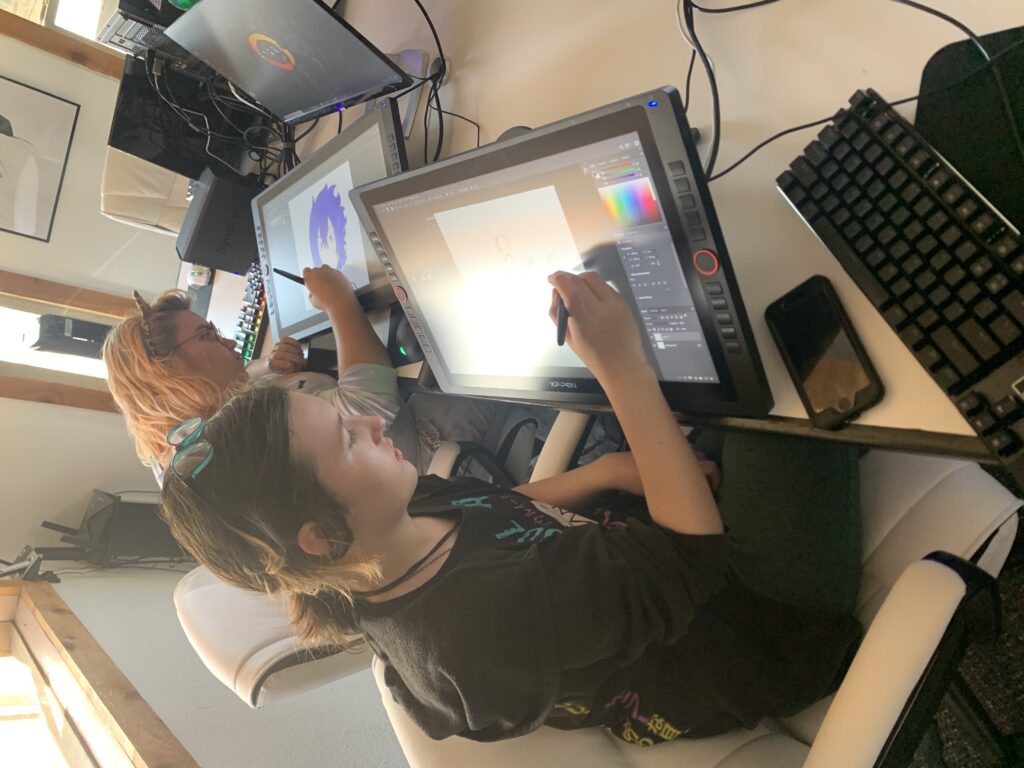 Vigilante Studios designers at work on a project. Courtesy photo.

Take ray tracing, for instance. It’s a rendering technique that allows for more realistic lighting and reflections by tracing individual rays in a 3-D environment. Movies have used it for a while, starting with Pixar’s Monster University in 2013. But because ray tracing is computationally demanding, it’s never been on the table for real-time graphics rendering — until now. Playstation 5, Xbox Series X and recent computer GPUs support ray tracing right out of the gate. That isn’t just good news for graphical fidelity. It also has big implications for deeper, more immersive storytelling.

Seward cites the video game Control as a recent inspiration. The 2019 action-adventure game follows Jesse Faden, the unlikely new director of the fictional Federal Bureau of Control, as she investigates a mystery of reality-defying proportions. The game is a technological marvel, with the FBC office building’s marble floors and glass partitions capturing beautiful ray-traced reflections. But it’s all in service to a fusion of sci-fi, mystery, surrealism and horror that equals the best of The X-Files.

It’s not just video games that stand to gain from the new technology. Digital sets are becoming an increasingly appealing option for filmmakers and TV producers looking to cut costs. Used most famously by the hit Star Wars-based series The Mandalorian, digital sets display digitally-rendered backgrounds on giant LED video screens during shooting. It’s essentially a high-tech version of rear projection, a technique used in filmmaking for nearly a century.

So where do you start when it comes to introducing this exciting world to a new generation? For Seward, it began with building hardware up to the task. Using the best components he could get his hands on, he put together 10 workhorse PCs that could handle the demands of modern graphics rendering. Likewise, he corralled all the pressure-sensitive artist tablets — needed for sculpting 3-D models and environments — he could find.

It’s everything Vigilante Studios needs to fulfill its dual missions: education and creative development. And with clients already seeking Vigilante Studios out for contract work, Seward hopes to connect trainees to paying work straight away. Eventually, he hopes to develop an in-house game or product that can generate some residual income. When the time for a more ambitious project comes, Seward knows talent from his California days he can recruit for the task.

“We can basically pull people together like Voltron to get it done,” he said.

Another question is where Vigilante Studio’s ultimate home will be. Right now, it’s located near the library in Bonners Ferry. The plan is to at some point either move or expand into Sandpoint. The particulars, Seward said, will likely be sorted out when COVID-19 is.

“Right now, we’re just limping through this the best we can,” he added. 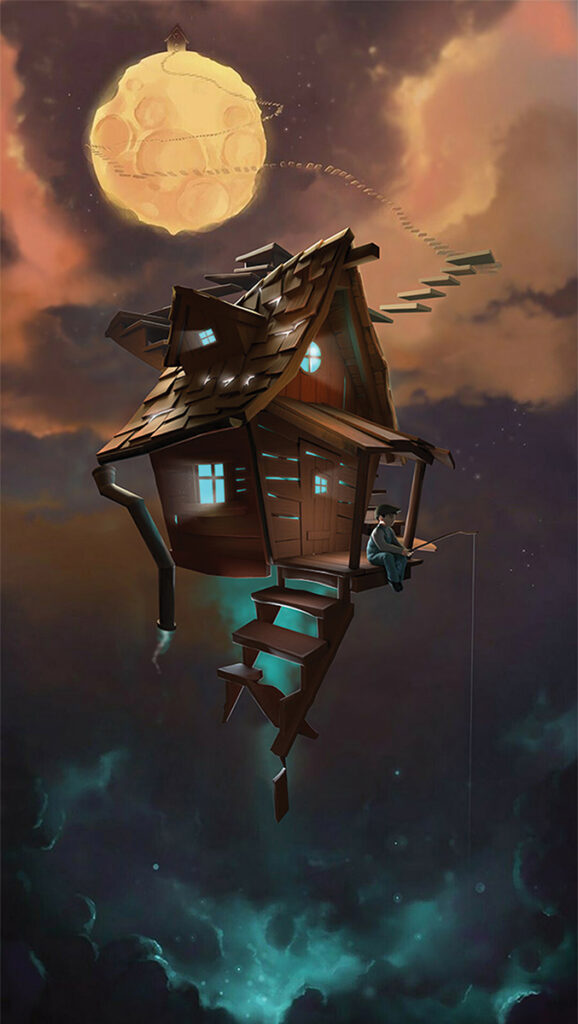 In some respects, Vigilante Studios fits into the “Zoom town” phenomenon that has been observed in places like Sandpoint and Bonners Ferry, particularly during COVID-19. Contractors and remote employees are increasingly seeking smaller communities for a chance to enjoy a quieter, more outdoors lifestyle.

According to Boundary County Economic Development Director Dennis Weed, North Idaho has seen its fair share of remote employees bringing relatively high salaries into its communities. But it’s a trend that could fizzle if the northern counties don’t ensure ready access to housing, reliable internet access and prospective employees with the right skills.

When it comes to skilled employees, Vigilante Studios intends to do its part. After all, computer graphics are about making dreams reality. And is there any dream more inspiring than doing what you love for a living?

“If you can do that, then you’ve got it made,” Seward said.

To learn more about Vigilante Studios or apply, visit vigilantegamestudios.com.