Taran White has literally been fishing all of his life — his first trip aboard an Alaskan fishing boat occurred when he was just 2 months old.

“My mom has a picture of me on her back while she was picking salmon off the back deck,” White said. “We kinda grew up playing on the bluff mud fjords in Bristol Bay; tundra as far as you could see.”

As with many Alaska fishermen, White got into business through his parents, Chris and Char. They would travel from their home in North Idaho to Bristol Bay, one of the world’s most prolific wild salmon habitats, fish like maniacs for a couple months with very little sleep, then return home to prepare for the next season, selling their wild-caught salmon to local restaurants in the meantime.

White started working for his parents when he was a teenager, paying for his ski pass at Schweitzer with the money he made in Alaska. 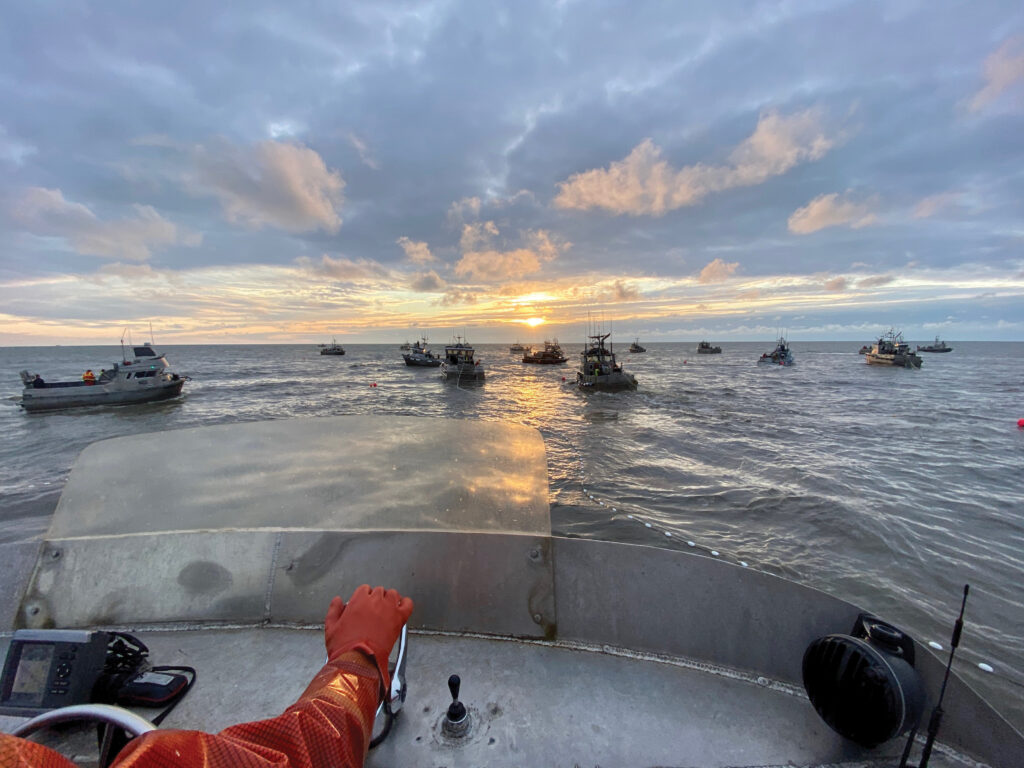 The view forward of the hectic Bristol Bay fishery from F/V Thunder.

Looking back on his introduction to the fishing lifestyle, Taran wasn’t always sure he wanted to fish for a career.

“Originally I didn’t really enjoy fishing with my dad,” he said. “It was always cold, and I remember hugging the smoke stack to keep warm. Back in those days the weather was worse than it is now. It’s getting warmer and warmer now.”

But, when he turned 18, White realized fishing was in his blood.

“As my dad always said, ‘There are only two jobs in the world you can make this amount of money with this little amount of time: drugs and fishing,’” White said. “Now, I would do this even if it didn’t pay anything. I love it. I love being my own boss, the adrenalin. It’s not about the money at all anymore.”

White purchased his first fishing boat when he was 26, which he referred to as “the slowest boat in Bristol Bay.”

Now onto his third boat — The F/V Thunder, which is arguably the fastest boat in Bristol Bay — White established the business Thunder’s Catch with the help of his wife Kara Berlin.

Before moving to Sandpoint, Berlin didn’t have any ambitions about spending her future on a fishing boat in Alaska. She studied business and marketing at Gonzaga and secured a job at Coldwater Creek in Sandpoint while the company was still solvent.

“I came to Sandpoint for Sandpoint, but Coldwater Creek was just a means to be here,” she said.

After Coldwater Creek closed locally in 2015, she worked a few random jobs — one at a psychotherapist office, another for a start-up company — because she was sure about one thing: She wanted to remain in Sandpoint.

“I just kept finding ways to stick around Sandpoint, because I wasn’t here to work,” she said. “I was working so I could be here.” 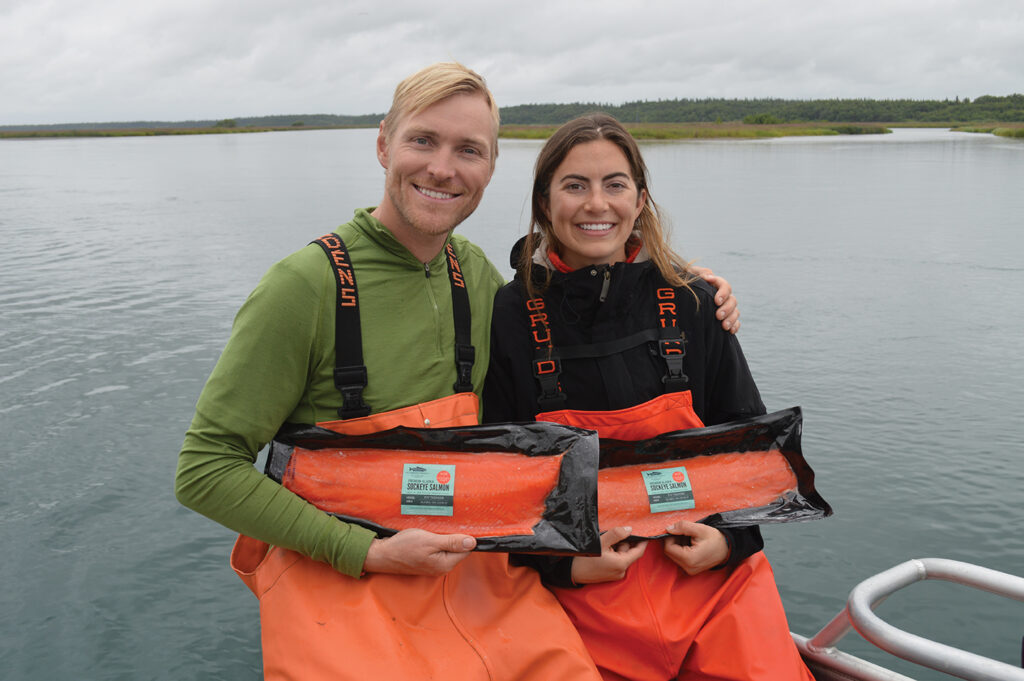 Berlin met White through his sister, Tyga, who also followed in the family tradition by fishing in Alaska. Tyga and Berlin first became friends while working together at Coldwater.

“Tyga invited me on their family sailboat in the fall of 2014,” Berlin said. “I definitely didn’t go with any intent of falling head over heels for Taran, but Tyga thought we might hit it off so she arranged our time on the boat together and we totally hit it off.”

After they came back to “reality” after sailing in Greece together, White and Berlin were inseparable. White was working in Bellingham, Wash., at the time and ended up packing all his belongings to move back to Sandpoint “for a job at Schweitzer” teaching snowboarding. The real reason, of course, was that he had to see about this amazing person he spent time with on the sailboat.

After traveling together, White and Berlin solidified a plan of action to make Thunder’s Catch a true “deck-to-dish” business promoting wild-caught Alaskan salmon sourced directly from those who harvest sustainably.

Thunder’s Catch sells a variety of salmon products from its wild-caught harvest, including sockeye filets in full and individual portions, smoked king salmon in three different flavors, sockeye lox and smoked salmon spread, jerky and more. New this season is a smoked salmon chowder that is preservative-free and shelf-stable for two years.

“We’re really excited about this new smoked salmon chowder,” Berlin said. “You can take the pouch on a four-day backpacking trip or serve it at home with a hunk of Bluebird Bakery bread and a green salad and white wine — it’ll totally knock your socks off. I’d totally serve it to guests for dinner.”

The annual salmon harvesting takes place from June through most of July, which often sees White and Berlin working long days with very little sleep between shifts. The steps to catch salmon in the wild include setting nets; reeling them in; bleeding the fish; throwing them into refrigerated seawater; then taking them straight to a processing plant on shore where they’re boned, fileted, vacuum packed and flash frozen before being shipped to Seattle.

“Fishermen are allowed to buy back their catch after that,” White said, and it’s this “buyback” stipulation that helps fishermen sell their fish in their own communities, turning seasonal jobs into year-long vocations.

Thunder’s Catch will be holding its “Salmon Stock Up” ordering event Friday, Dec. 17-Saturday, Dec. 18, when customers can purchase stocks of frozen filets and smoked salmon to stock their freezers this winter. To order, visit thunderscatch.com. Orders are either available for pick-up or can be shipped anywhere in the U.S.

“Thunder’s Catch is donating 10% of all December’s sales back to the Bonner Community Food Bank in the form of wild Alaska salmon through our One:One Salmon Love program,” Berlin said. “Eating wild salmon makes us feel happy, healthy and strong in our body, mind and spirit, and we want to share that feeling with as many people in the community as possible. We’re super appreciative of our customers’ support in our efforts to share the salmon love with those in need.”

For White and Berlin, promoting sustainable salmon fishing is an important part of their lives. The couple said it’s critical to read the packaging whenever purchasing salmon in grocery stores to make sure you are buying wild caught instead of farmed salmon.

“There is so much environmental stewardship with our fishery,” Berlin said. “The consumer can vote with their dollar. When you buy wild-caught fish, you’re supporting efforts to maintain the fishery. The fish that we catch aren’t as important as the fish we don’t catch.”

Another reason to eat wild-caught salmon is that their flesh turns pink naturally from the food they consume, while farmed salmon’s flesh only turns pink because their food is dyed by farmers to make it look similar to wild species.

What started as a summer gig to pay for a ski pass has morphed into a full-time business, which White and Berlin hope will keep them coming back to Alaska every summer for years to come. Already the pair have established themselves in the cutthroat industry as one of the top producers in Bristol Bay. In 2019, White’s crew pulled in the biggest harvest of the entire fleet, earning major bragging rights among the fellow captains.

What’s more, a documentary crew recently filmed on board the F/V Thunder for a show called Battle on the Bay, in which they followed the Bristol Bay fishermen in the annual harvesting efforts. The show is available to watch on Amazon Prime.

“A lot of the drama on the show is fabricated, like any reality TV,” Berlin noted, “But they did a good job touching on the sustainability of the fishery and really got some amazing footage. Our friends have no idea what Taran does and it’s really cool for them to see some tangible visual footage to pair along with the stories they hear.

“Taran is one of the best captains in the bay,” she added. “He pays the most money to his crew, rotates crewmembers, gives them good amounts of rest, but he works them hard. Taran is relentless.”

“At the end of the season I totally wear down, though,” Taran said, smiling. “When we’re fishing the adrenaline says I don’t need to sleep, but after we’re through I’m very tired.”

Both White and Berlin said they were thankful this community supports their efforts by purchasing wild-caught salmon when they can.

“It takes a lot of intention for a customer to vote with their dollars and go out of their way to support us,” Berlin said. “For a restaurant not to check mark the salmon on the Cisco truck, instead sourcing the fish intentionally, that speaks volumes for the community. It’s incredible.

“The ability to share what we do and have customers who send us text messages of their dinners with our products — that means the world to us,” she said. “It makes all our hard work worth it. We get to help put this incredible, nutritious food on their table.”

To learn more about Thunder’s Catch or to stock up Dec. 17-18, visit thunderscatch.com.