To Priest River and beyond

Former astronaut Barbara Morgan and Priest River Elementary teacher Chris Naccarato share a dream of space. But that’s not the thing they have in common — they also both understand the power that space holds for inspiring young minds. That’s why, with decades of experience in their professions, their shared focus is firmly on inspiring students to reach for the stars, whether they do it figuratively or literally. 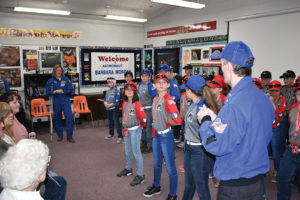 “What I love about education is its work is never finished,” said Morgan. “And it’s constantly going to be improved upon. As times change, we adjust to the times.”

Morgan didn’t grow up with any ambitions of space travel. Like many of her generation, she was awestruck by the Apollo 11 moon landing in 1969, but she never imagined she was cut out for a similar feat — an impression reinforced by gender norms of the time.

“It’s just not what girls did,” said Morgan. “Girls became teachers, moms, nurses, secretaries. So it never occurred to me that was something I would do.”

The opportunity nevertheless came her way when she was selected to train for the Teacher in Space Project, which was launched by the Reagan administration in 1984. A year after the program’s foundation, in 1985, she trained as a backup candidate for the Challenger mission with fellow civilian teacher Christa McAullife. Morgan accepted the opportunity primarily as a way to inspire her students at McCall-Donnelly Elementary School.

“Just like a lot of teachers, I sat up and paid attention,” she said. “We’re always looking for ways to make the classroom a more exciting place for students, so it was a natural attraction for me.”

That mission ended in tragedy in January 1986, claiming the lives of McAuliffe and her six fellow crewmates, and the Teacher in Space Project ended in 1990. Yet, Morgan remained committed to the NASA cause, finally blasting off on a mission to the International Space Station in 2007.

Likewise, as another young Idaho teacher, Naccarato recognized how space travel captured many of his students’ imaginations. It was an excitement he shared, remembering his own experiences watching the Apollo expeditions of the 1960s and ’70s. He saw it as an opportunity to fire them up not only for science, but also reading, writing and just about every other educational discipline. To that end, he reached out to astronauts, hoping one would accept an invitation to visit his classroom in Priest River.

That’s how his and Morgan’s paths crossed for the first time.

It was the early ’90s, years after the Challenger disaster. Morgan had resumed her teaching career and was also working with NASA in its education division. Naccarato, meanwhile, had contacted her as an Idaho teacher who had undergone astronaut training. He still remembers the day Morgan returned his call.

“I was a young teacher still living at home at the time,” he said. “I was in my room listening to music … and my mom came in saying Barbara Morgan was on the phone.”

They talked for about an hour on the possibilities of using space travel as an educational tool, Naccarato said. The conversation planted the seeds of what would become one of Naccarato’s proudest achievements: the National Astronaut in the Classroom Association, or NACA. The idea of the program was to encourage students to work hard toward their dreams through classroom visits by astronauts. According to Naccarato, astronauts — themselves highly motivated and education individuals — proved remarkably receptive to the idea.

“They’re not the types who just send a rubber-stamped photo,” he said.

For Morgan, the next decade moved quickly. In 1999, NASA asked Morgan to resume her training as an astronaut. Over the next several years, she underwent a rigorous system of classroom studies, space flight simulations, hands-on work projects and Mission Control posts. It culminated in STS-118, a 2007 space flight mission in which Morgan and her crew assisted in the construction of the International Space Station. Morgan served as the robotic arm operator, moving massive pieces of equipment in a zero-gravity environment. She spent 12 days in space, safely returning to the Kennedy Space Center on Aug. 21, 2007.

Despite the fanfare and excitement of space travel, Morgan’s original motivation to use her astronaut experiences as an educational tool hadn’t changed. She spent the next year working with NASA on educational initiatives before accepting a teaching position at Boise State University.

“I feel very lucky to have had three incredible careers: in elementary education, as an astronaut and higher education,” she said.

During the same time, Naccarato’s NACA program flourished. It evolved into a comprehensive educational tool framed around space travel. Students take on a variety of activities, from writing letters to astronauts as an English-honing exercise to studying physics and flight via bottle rocket launches. Through it all, astronaut visits motivate the kids to work hard toward their dreams. To date, the NACA program has facilitated 45 astronaut visits.

Naccarato and Morgan’s intertwining career paths came full circle this year when Morgan became one of the astronauts to visit Priest River Elementary as a NACA guest. The day kicked off with a classroom visit, followed by a school-wide assembly. Afterward, the students and teachers headed outside for bottle rocket launches under the NACA banner.

The excitement was evident on the students’ faces as they blasted off home-made rockets with a real-life astronaut in the audience.

For Morgan and Naccarato, that’s the best result of a life’s worth of labor.

“[Hands-on science education] is getting at the deeper level of things, and I’m really excited about what we’re doing,” Morgan said. “We can never take education for granted, especially public education. I think public education is the foundation of our democracy, and I really worry when it is constantly under attack.”