On the heels of the hottest, driest summer on record in North Idaho, which sparked a record wildfire season, and on the eve of critical international talks on climate, local citizens are asking, “What can I do to help stop irreversible climate change?” 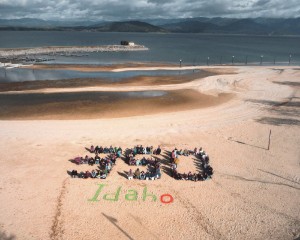 The Sandpoint chapter of 350.org gathers at the City Beach. Courtesy photo.

That question led a core group of local residents to form a Sandpoint chapter of 350.org, the global movement that’s challenging the political inertia around our global climate crisis.  With a network active in over 188 countries, the group aims to

•keep fossil fuel in the ground,

•divest from investments in fossil fuel.

The inaugural activity of 350Sandpoint is to organize a walk and gathering on November 29 to coincide with the global rallies, marches and protests kicking off the Paris Climate talks.* World leaders will be gathering in Paris from November 30 through December 13 for the purpose of arriving at international agreements to curb greenhouse gas emissions. Previous talks have fallen short of what’s needed to slow – let alone reverse– the rise of global temperatures.

350Sandpoint invites the public to join them at 1 p.m. Sunday, November 29, at the Bridge Street parking lot (near the entrance of City Beach). From there, they’ll walk to the Little Panida Theater, where streaming video from global events will be shown on the big screen (technology permitting). Video streaming allows Sandpoint to join hundreds of thousands of people around the world demonstrating for change now. The gathering will consist of entertainment, refreshments and information on how to be involved in further action to combat global warming.

350Sandpoint offers an opportunity to connect over the specific challenge of global warming to provide a united voice in urging elected officials and other leaders to act on this critical issue.

In a follow-up event, Idaho Conservation Leagues is hosting a luncheon and  community Skype with global climate activist Gary Payton at the Sandpoint Center Auditorium. Payton, a Sandpoint resident, will be in Paris attending the climate talks. ICL’s energy expert, Ben Otto will also be at the lunch to discuss Idaho-based climate solutions. Meanwhile, 350.0rg is organizing another global march on Dec 12 at the end of the Paris talks.

350Sandpoint is a gathering of people interested in doing something about climate change now. “We are a place to gather, find out about what is going on locally and globally, said Jean Gerth, founder of 350Sandpoint.org.  “We will be ready to participate in an organized way, when our leaders need help in their quest to be responsive to the realities of science, the principles of justice, and the will of the majority.”

“You can help move the project forward simply by connecting with your friends here and around the world for information and support,” Gerth continued. “We can change the world, if everyone contributes a small amount of time and works together.”

*The goals of the 21st session of the Conference of the Parties to the UN Framework Convention on Climate Change, or COP21, are to craft an international agreement to combat climate change (keep global warming below 2 degrees C) and accelerate the transition to low-carbon societies and economies. The talks will be from Monday, Nov 30 to Saturday, Dec 12. Heads of State gather on Monday, Nov 30 in Paris. Remainder of first week, the climate negotiators from each country continue to hammer out the details of the climate agreement. Second week, Senior Ministers of the respective countries continue the negotiations at a higher level.  Results of the talks will be known on Friday or Saturday or Sunday, Dec 11, 12, 13.