Bluegrass band descends upon the Hive

Heard The Lil’ Smokies from Missoula, Montana? Yeah, they’re coming to town. Seriously, if you haven’t heard them, you should. The acoustic sextet will be playing The Hive on Friday, Dec. 18. 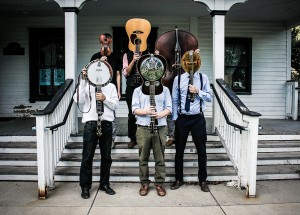 You could call The Lil’ Smokies a “progressive acoustic” outfit, or describe their music as “a unique blend of traditional bluegrass, newgrass, innumerable unique originals, sheer raw energy, and exquisite musicianship.” I hope those are fair descriptions. I’m quoting their website.

This bunch comes across as a genuine, hard-working, thick-as-thieves group of guys, making the most of their talents. They’ve been shaping their sound for nearly seven years, building a solid fan-base in Missoula and gaining notoriety well beyond the borders of their home state. They crowdfunded their first album back in 2013. Just this year they won the Telluride Bluegrass Festival band competition.

Jesse Brown, who carries violin and vocals for the Smokies, was kind enough to tell me a bit about their sound, their experience on the road, and what they are working on as a band.

You’ve been labeled bluegrass (and a variety of bluegrass derivatives), which is understandable. I’m sure that opens the door for some fans, but it might deter others. How do you deal with that? Do you feel like you still have a great deal of creative freedom as a band?

The label “bluegrass” over the last decade or so has started to cover a wide spectrum of acoustic music. Many of the bands and styles today are far from traditional bluegrass. We have found it necessary as acoustic musicians to express more than your 1,4,5 high and lonesome breakdowns. At the same time, I can say that playing in this band and entertaining a bar crowd would be nearly impossible without our bluegrass roots. Naturally, we draw certain people to our music and turn others away with our style, progressiveness, and traditionalism being all wrapped up into one show, but we will take whatever causalities are necessary to stay true to our calling in music.

In one interview you mention “rubbing elbows” with other bands. How has that experience helped you thrive? Has it influenced your music?

We have been fortunate enough to travel a mixed bag of cities, towns and festivals from here to San Francisco and everywhere in between. We have had the chance to meet many musicians and bands we would’ve never heard otherwise, who we now call friends. We might schedule some gigs with them, crash on their floor or sit in on stage with them for a song or two. One way or another, meeting and playing with new musicians is almost always an inspiration musically and personally to all of us. In addition, we have had the lucky experience of playing festivals and a few gigs in which we are in the same green room as musicians who are our heroes and inspire us in more ways than just music. I remember spending hours transcribing songs; or that one signature lick, then a decade later shaking the hand of that hero as they say, “Great set guys,” or standing backstage at a festival watching someone you look up to play their own original music better than any CD could portray. Every one of these moments is an inspiration that makes you play music in a different way without even practicing. I know we will all reminisce on those interactions ‘till we are well past our years.

What are you working on now, the thing you’re most excited about?

Currently, we are spending some time catching up on home life, rest and new material after being gone for a bulk of summer and fall. We are most excited about continuing to work toward this new album. We feel as if it’s long overdue, but with as much time as we have spent touring it’s hard to find opportunities to bring everyone together to record. It’s not a quick and easy project, and we definitely want this album to be a step up from our previous material. I can say confidently that we have been proactive in regard to this album for the past year and a half and we are finally closing in on the finish line.

Is your interest piqued? Good music speaks for itself. Go to thelilsomkies.com, listen to their songs, watch videos, read the blog, and connect via your favorite social media platform -the Smokies are on Facebook, Twitter, and Instagram. You can even purchase tickets for their show Friday, Dec. 18 at the Hive. You can also fund their music on Spotify and iTunes.