Seeing the forest for the trees

The many benefits of growing and maintaining Sandpoint’s urban forest

Have you ever experienced walking along a city street or suburban sidewalk and suddenly feeling calmer, more relaxed and maybe a little less anxious? If we are lucky, that sense of calm will linger for a few more city blocks, and the only thing that has changed from one block to the next is the presence of a few mature trees. 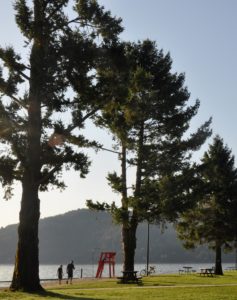 Pedestrians walk past some of the stately trees at Sandpoint City Beach. Photo by Sharon Lewis.

Surprisingly, there is a lot of scientific evidence that explains why human beings experience a sense of calm in the presence of trees: cortisol levels drop, anxiety lessens, energy increases.  Although we are not always acutely aware of the changes in our psyches as we walk from an exposed, asphalt parking lot to a shady city street, most of us can remember experiencing that change. For all the advantages that town life has to offer, the reality is that without trees and access to natural environments within our city limits, our urban lives would be more stressed, less healthy and economically less valuable.

In the past few decades the economic, environmental and public health value of urban forests have been studied extensively in the United States and around the world. Urban trees have been shown to increase property values by as much as 20%.

Trees have undeniable aesthetic value; a healthy tree is lovely to look at, so it makes sense that a tree would add significant financial value to any home or business. However, urban trees aren’t just for real estate investors or appreciative pedestrians — trees have an involuntary calming effect on drivers, as well. People drive more slowly down tree-lined streets, which is especially critical in neighborhoods where children are present. Trees muffle traffic noise and less traffic noise means less stress, which might explain why violent crimes are statistically less where trees are present.

Additionally, urban forests contribute to better air quality and reduce stormwater runoff. After all, trees are essentially massive air and water filtration systems. Moreover, trees growing in proximity to buildings help lessen fluctuations in temperature, which can help reduce monthly energy bills — something we all need.

More and more cities and towns around the world are actively assigning economic and community value to their urban forests. The city of Sandpoint is no exception. Healthy urban forests don’t happen by accident, they require dedication and effort from mayors, city administrators and residents.

Beginning in the early 2000s, the city took over responsibility for the urban forest from the Independent Highway District. Fortunately, then-city officials appointed Stephen Drinkard, a grant writer for the city, as “Tree Guy.”

Drinkard combined his passion for grant writing and trees to establish a solid foundation for building an Urban Forestry Program. It took years to adapt city code, establish a tree committee, develop a tree inventory, a budget and — most important — enlighten the community about the importance and value of urban trees.

Urban forests include all trees: street trees, park trees and trees growing in our private yards. One of the stated missions of Sandpoint’s Tree Program is to create more tree canopy. However, as Drinkard pointed out, “A city cannot plant trees on private property, but it can plant trees on public property, which includes the right-of-way in front of people’s homes.”

The right-of-way is simply defined as the section of public land located between the street curb and sidewalk edge (whether a sidewalk exists or not). Understanding this is the basis of Sandpoint’s Neighborwoods program, which was established in 2005.

The Neighborwoods program reaches out to residents living within the city limits who have space available in the right-of-way in front of their homes. With the homeowners’ permission and consultation, the city will plant a tree or trees in that right-of-way space for free.

Each year, with the help of the Sandpoint Tree Committee, local tree nurseries and participating homeowners’ commitment to care for their right-of-way trees, Sandpoint Urban Forester Jared Yost hosts a Neighborwoods workshop that assists homeowners in choosing “the right tree for the right place.” This means considering tree species, city code, overhead wires and underground utilities. Since initiation of the program, the city has planted approximately 900 street trees.

Those interested in Neighborwoods, urban forestry, tree care tips and continuing to grow our urban forest are encouraged to visit sandpointidaho.gov/trees.

Since joining the city of Sandpoint Tree Committee more than 10 years ago, Sharon Lewis’ appreciation for urban forestry has grown alongside the Neighborwoods’ spring snow crabapple tree planted in the right-of-way in front of her house six years ago.