When people talk about evolution, terms like “perfectly adapted” often arise. In truth, evolution is far from perfect but it has given us a lot of the tools we need to survive. Like a billion-year-long road trip, we’ve picked up a bunch of kitschy roadside trinkets we don’t really need any more called “vestigial traits.” 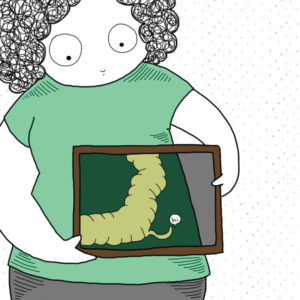 The appendix is the most obvious example of a vestigial trait. It’s a shriveled organ attached to the lining of our large intestine. It is believed that the appendix was useful for helping our primate ancestors digest cellulose-rich plants in their early foraging diets; a pre-paleo diet, if you will.

Some physicians and medical scientists argue that it still serves a purpose in modern humans, but that the risk of keeping it around outweighs any benefits it offers. The appendix resides in one of the most bacteria-infested places in our bodies, so it should come as no surprise that it can get severely infected, inflamed and filled with pus to the point of bursting. When your appendix bursts, it’s like a biological hand-grenade dumping a large volume of harmful bacteria into your abdominal cavity. Also, it hurts worse than getting clocked by Brock Lesnar.

Wisdom teeth are another vestige of our dietary past that plagues our present. Anthropologists believe that wisdom teeth initially developed to help our ancestors chew through fibrous food the appendix would later help digest.

A lifetime of chewing and ignorance of dental hygiene meant our ancestors needed some backup teeth if they were going to celebrate their 25th birthday, so as their molars broke down, decayed and fell out, a new set grew in to replace them. This became a liability with the advance of dental care: our molars stopped falling out, but our wisdom teeth kept growing, putting painful pressure on the still-healthy chompers.

Most of our vestigial traits are either part of our head or related to our digestive tract, which is a byproduct of our rapid evolution and frequently changing diets. Tonsils are another vestigial organ that most people end up having removed from their body by their sweet 16. Tonsils seem to have acted as a first line of defense against airborne contaminants that could infect the respiratory tract — a service they still perform, though very badly. Like the appendix, our tonsils get infected, swell up, discharge pus and create an all-around miserable experience that is completely unnecessary.

Though you may not realize it, our sinuses are also a vestigial trait inherited through evolution. The sinus cavities of our ancestors were most likely used to heighten a sense of smell to detect food and predators. As we evolved into a predatory role, we began to place a larger emphasis on vision than smell, and the body responded by putting more energy toward developing our eyes, leaving a big, moist cavity in our head that acts as a nursery for all manner of bacteria. It may be a trait we could live without, but it’s not completely useless or exclusively detrimental to our health. When a respiratory infection begins, the mucus you keep rocketing out of your nose will tell you something is wrong as it transitions from being translucent to a gnarly green or yellow.

Not all of our vestigial traits are quite as gross as the aforementioned infection centers. Some are completely neutral, while others can be somewhat entertaining.

Case in point: male nipples. Why do we have them and what do they do?

These are a weird trait that likely precedes even our primate ancestors. An embryo in the womb will always begin as a female. It’s only when a Y-chromosome is present that the cells begin to develop testosterone and all the body parts it needs to embark on a journey of fighting and high-fiving through life. For some reason, the nipples don’t get reabsorbed back into the body, they just stay there. Perhaps at one time, one of our ancestors tens of millions of years ago may have had hermaphroditic traits during population fluxes; we really have no idea. In some rare cases, the body goes a step further and creates an extra nipple that’s somehow even more useless than the first two.

Dude nips aren’t the oldest useless thing we’ve inherited from our ancestors. That would be your third eyelid, the plica semilunaris. If you look in a mirror at the corner of your eyes, you’ll see a small band of pink flesh alongside the tear duct. That’s it. In other animals, it’s called a nictitating membrane, and acts as an extra layer of defense against bacteria or other contaminants damaging the eye. It’s most often seen in birds, reptiles and fish, which have some of the oldest and most direct genetic lineages to dinosaurs, but our dogs have them, too.

So what could be the last vestigial trait on the list? It’s our tail, duh.

The coccyx, sometimes called the tailbone or “the painful thing that everyone lands on when they fall” is the remnant of a tail that our ancestors may have sported since shortly after the dinosaurs went extinct. Curiously enough, while we were all a fetus, a good portion of our body was actually a tail. Unlike most of the other traits listed in this article, our coccyx is still a useful and functioning part of our anatomy, acting as a major anchor point for several tendons and ligaments around our pelvis.

If you’re curious about evolutionary biology or more weird traits we’ve developed with, ask your friendly neighborhood librarian about this article and get ready for a weird and wild ride.