Editor’s Note: New businesses are springing up all over Sandpoint this summer, and here at the Reader, we’re making an effort to introduce them to the community. Are you a new business owner in the greater Sandpoint area? Contact Cameron Rasmusson at [email protected] for consideration in future articles. 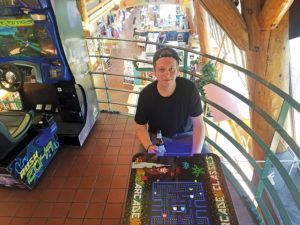 There’s just something about an arcade — the beeps and blips, the clink of quarters and flashing lights, the cheers over a new high score on Pac-Man. Add food and drinks into the mix, and you have boss-level entertainment.

That’s the magic of Coins Arcade. Whether you’re looking for a fun afternoon with the family or a place to have a couple beers and play some video games, Coins offers 8-bit good times for two bits at a time.

Started by young entrepreneur Kale Miller, Coins opened on the second floor of the Cedar Street Bridge at the end of June, and the comfy spot has already attracted a following. The name of the game at Coins is variety. And that’s reflected in both the entertainment — including arcade machines, skee ball, arcade basketball, classic games like “Mario Kart 64” on a projector and more — and in the clientele it serves.

“My idea behind the thing was to have a place where families can come in during the day and early evening, and then on weekend nights we switch to a 21-and-up bar scene,” Miller said.

The food menu fits within the comfort food niche — including selections like pretzel bites, beer cheese dip, German sausage and chicken twists. Better yet, it all goes great with beer, with options ranging from light and cheap brews like Pabst Blue Ribbon to a few micros from breweries like Deschutes.

Coins Arcade joins the revitalization of the Cedar Street Bridge, now under new ownership, flush with businesses and hardly a spare suite to rent. The Bridge is attracting foot traffic among locals and tourists alike, and Miller is excited to see all the interest in the new Cedar Street businesses.

As he prepared to open the arcade, he’d have several people a day stop by to ask about the new downtown fixture. Many of those passersby felt the same way Miller did when he first landed on the idea of a bar-meets-arcade locale: Sandpoint needs something like this. When he had his first exposure to a similar bar years ago, he knew he wanted to bring a similar experience to his hometown.

While Miller’s attention is laser-focused on his debut month, he’s keeping an eye out for ways to expand. There’s always the option of bringing in TVs for sports events. And of course, a new game cabinet is a welcome touch for any arcade. Miller believes there are natural ways to expand as the business grows.

In the meantime, Coins aims to capture what makes arcades so special: the excitement of enjoying a good game with friends. After all, a beer at any old place is fleeting, but a high score is forever — or at least until someone beats it. 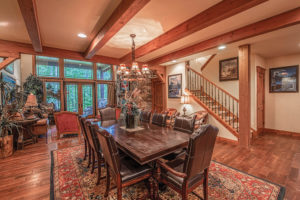 A dining room in one of the vacation rentals now managed by Vacasa. Courtesy photo.

Vacation rentals are big business in Sandpoint — so much so that fixture companies in the industry are attracting outside interest.

Case in point: Sandpoint Vacation Rentals. Founded in 2002, the company is positioning itself for the future with an acquisition by Portland, Ore.-based Vacasa, which manages more than 13,000 vacation rentals around the world.

After nearly two decades in business, it’s a big change, but founder Brad Golphenee believes great things are on the horizon. Better yet, he’s staying on as business development representative, so local know-how is still a fundamental part of the company.

“As a business development representative, I’m less bogged down by day-to-day demands that come with owning a company, and I’m encouraged to center my attention on my relationships with homeowners and guests, while sustainably growing the business,” he said.

The deal puts 52 vacation rental units under Vacasa management. With it comes five Sandpoint Vacation Rental employees, including Golphenee and his son, Cole, who will serve as local operations manager.

“Cole was raised in the business and knows Sandpoint like the back of his hand, so it was a natural progression for him to take on the local operations manager role, and he now oversees the territory,” Golphenee said.

Vacasa brings an expertise in managing listing channels like Airbnb and Vrbo, which means that more people will be exposed to local rentals and be attracted to Sandpoint. It was an attractive prospect for Golphenee, who was looking to limit his administrative responsibilities with the business. What’s more, his wife, Maria, is still focused on their long-term rental operations. For the family, it’s the best of both worlds.

“We are excited to welcome new guests, and show them just how special our town is, in hopes they’ll return with their families for years to come,” he said.